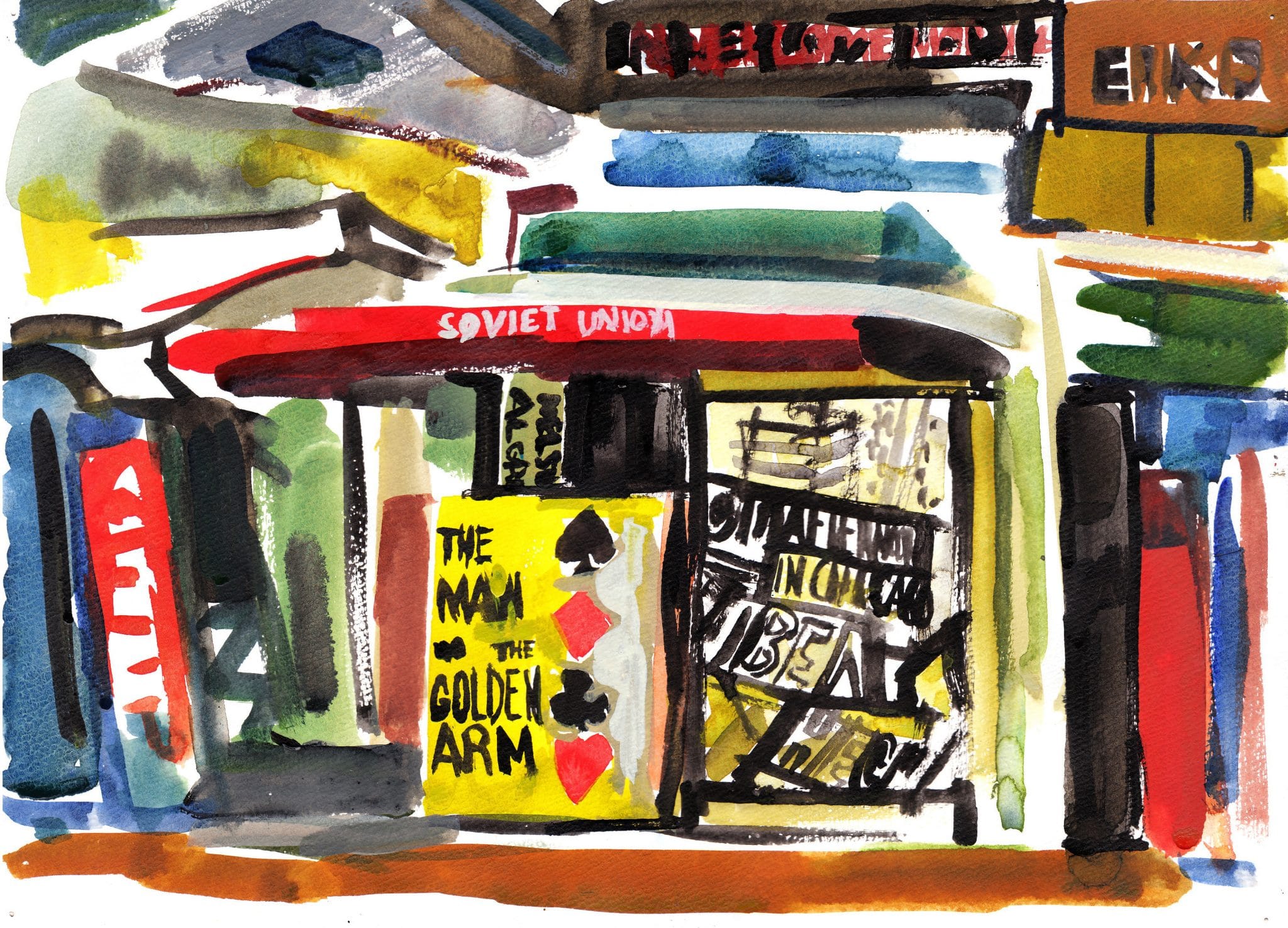 Text and Illustrations by Dmitry Samarov

Nelson Algren came into my life sometime in high school. This was in the late 1980s in a suburb of Boston, but I was lucky enough to have older friends to point me toward the books, music and movies that showed a world beyond my immediate surroundings. Algren wrote about down-and-outers in Chicago at the middle of the twentieth century, people who, like him, had survived the Great Depression and World War II and bore all the scars incurred from surviving those times. His books weren’t that easy to come by. Many were out of print and Algren was certainly not considered part of the canon. He wouldn’t be a writer a kid in suburban Boston would encounter in a high-school English class. Still, I was drawn to the world he wrote about and read all his work that I could find in libraries and secondhand bookstores. He introduced me to the city of Chicago several years before I came here to go to art school, before I even had any intention of coming here.

Since that time Seven Stories Press and the University of Chicago Press have worked to keep much of Algren’s work in print. Despite that visibility, even in his hometown, he is not embraced by the public. There’s a commemorative plaque near one of his former residences in Wicker Park and a fountain at Milwaukee, Division and Ashland, that is, fittingly, frequented by pigeons and bums. 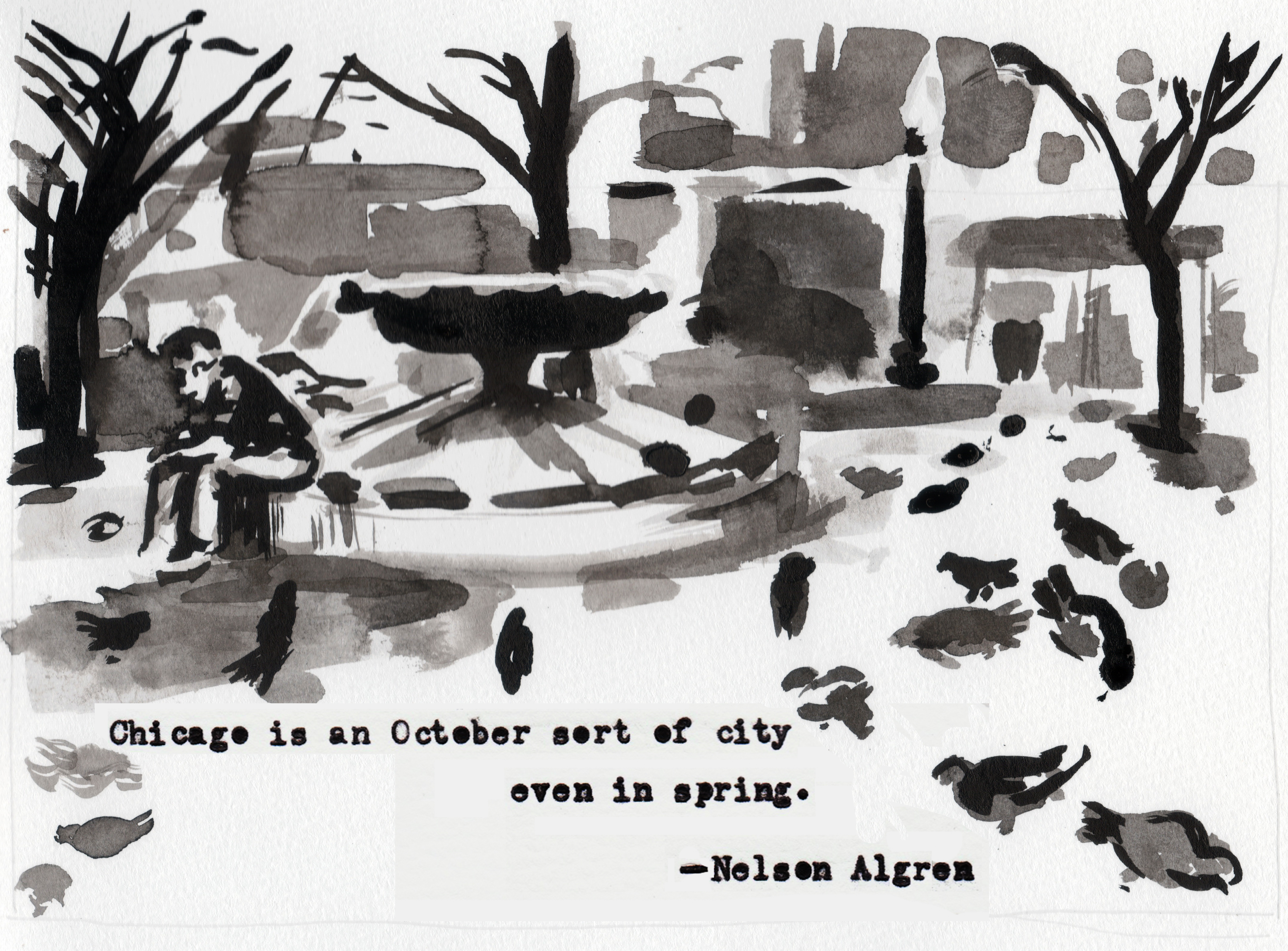 “The Man with the Golden Arm,” which won the inaugural National Book Award in 1950, was set around the corner of Division and Wood in an area the crumb-bums and addicts who populated the novel wouldn’t recognize today, although there are architectural remnants if one squints hard enough. Phyllis’ Musical Inn, the Gold Star Bar and the Rainbo Club were bars that Algren’s characters frequented in their fictive forms and that the author frequented in their actual ones. But if you ask the average lawyer, broker or web developer who lives in the area these days about Algren and his books you’ll get a blank stare. There are many reasons, but it likely begins with the fact that he wrote about Chicago with its warts on full display and few of us want to see ourselves or our city that way.

Still, he has his champions. There’s a Nelson Algren Committee, which, among other things, helped make that fountain happen and there are others, like me, who have done what they can to keep his work alive and follow in his footsteps. I’ve done paintings and drawings inspired by or devoted to Algren, as well as running a Twitter account in his name for a couple years before handing its administration to literary historian and Algren expert Bill Savage a few months ago. And now there are two full-length documentaries about Algren. Is there an audience for two films about a writer most people don’t know or seem to want to know about? 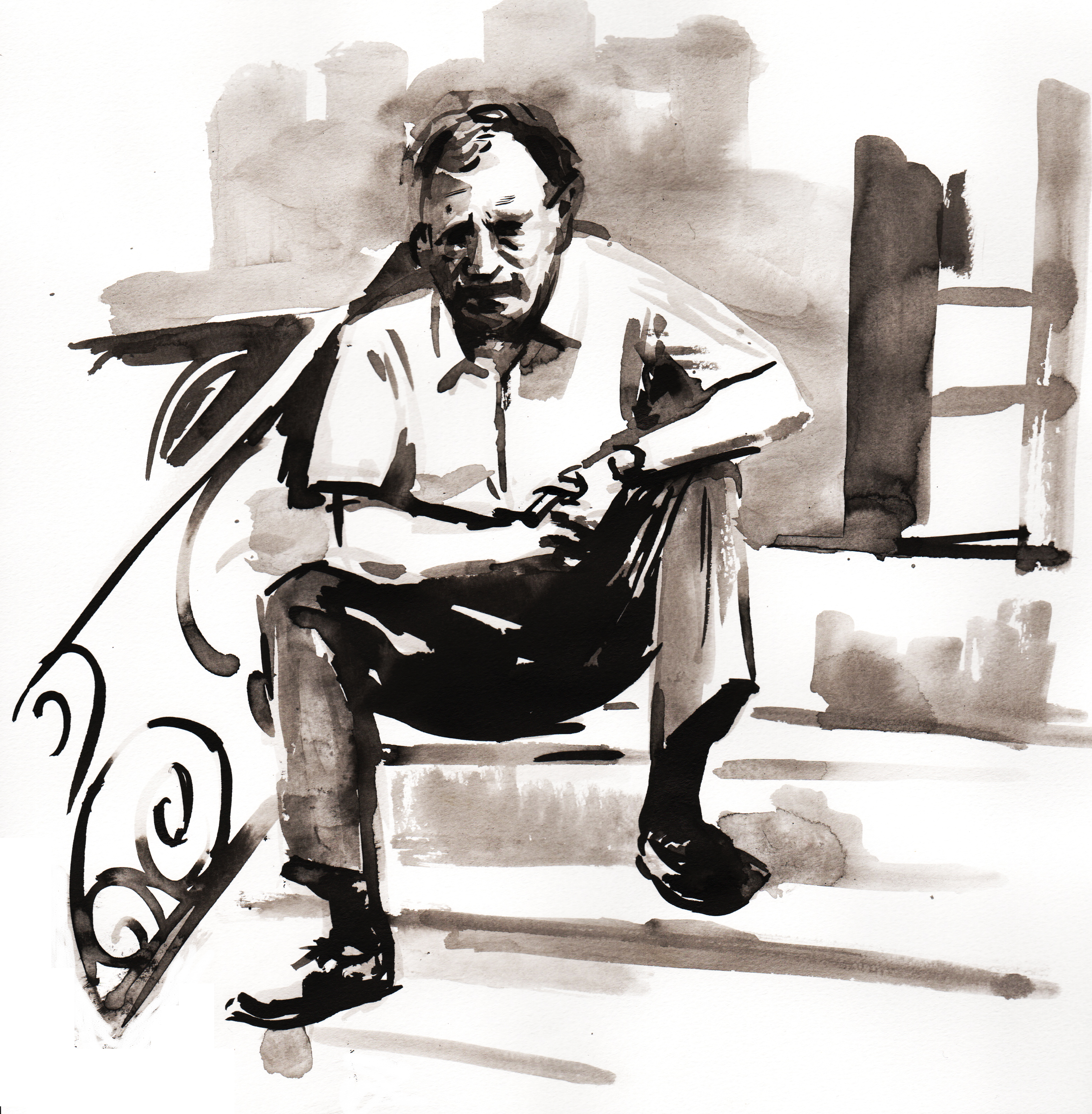 Michael Caplan’s “Algren” began production in 2009 and leans heavily on Art Shay’s many photographs of Algren and his settings. Shay, Savage, journalist Rick Kogan and others who knew the writer are interviewed. There’s little time to linger in Caplan’s frenetic editing scheme. I’ve read that he was inspired by the large-format scrapbook collages which Algren made as part of his writing process. A few of these collages are shown in the film and might be worth the price of admission. I wish someone would compile an art book of them. In the film, they are seen, but like other details, only in passing. Caplan seems to be in an awful hurry. Some of the interviewees are also questionable, most glaringly, Billy Corgan. I suppose it’s admirable that the old Smashing Pumpkin is an Algren fan but hearing him wax rhapsodic about the man and then being subjected to his singing over the end credits could’ve been avoided. Still, for some of the archival footage, especially that taken in his last years on Long Island, “Algren” is well-worth seeing. It may be a good introduction for those that know nothing about him but I can’t begin to judge it that way because I’m way too far in.

Mark Blottner, Denis Mueller and Ilko Davidov’s “Nelson Algren: The End is Nothing, The Road is All” first shot in 1990 and proceeded in fits and starts ever since. Documentary filmmaking is a labor of love on the best days and a thankless slog on the worst. After a recent screening at the Siskel Film Center, Blottner and Mueller appeared for a Q & A and looking at their faces from my second-row seat, I could tell they went through some trials to get their film to come together.

What they’ve come up with is a very different animal from Caplan’s. The pace is more relaxed and Rick Pardo’s jazz score lends it a mournful, late-night feel. Algren died in 1981 so in 1990, when this film was started, many more people that knew the man were still alive. Some of the best moments are provided by bookseller Stuart Brent, whose unrestrained adoration for Algren is a thing to behold. He calls him the Dostoevsky of Chicago at one point. Kurt Vonnegut, who met Algren toward the end of his life, at the Iowa Writers’ Workshop, is also insightful. He says Algren was the loneliest man he ever knew. Studs Terkel—who is a major presence in both films—describes his friend as something between a cat and Art Carney from “The Honeymooners.” Best of all is Tom Palazzolo’s footage of the man himself and the numerous audio recordings of his readings and interviews. Never faithful to any lover, Algren declares that “last night’s love is a bucket of cold ashes” at one point.

I’ve seen Caplan’s film twice and Blottner, et al’s just the once. I’d like to see it again to catch more nuances. Nelson Algren has been a formative influence, so the more attention that’s paid to his work the better, to my way of thinking. That two such different films could’ve been made about the same man is probably proof that his work is worthy of further scrutiny. A young writer named Colin Asher is currently working on a new biography so maybe his work will soon see more days in the sun. It’s doubtful that Algren will wind up on a postage stamp (though I hope they hire me to do the portrait if it ever does happen), but maybe one or the other of these movies will at least get the folks who now live in Ukrainian Village and Wicker Park to take an interest in the great chronicler of their neighborhood. Though Algren was more of a shot and a beer man than a sushi and craft cocktail type so we’ll have to wait and see.