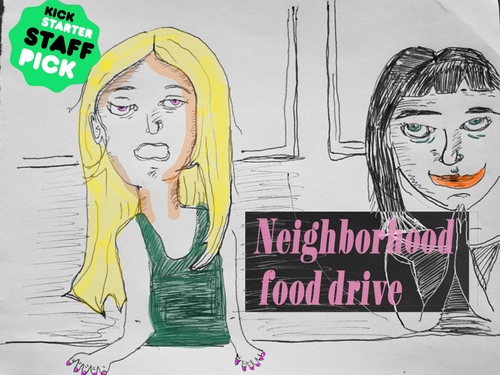 With their newest project, “Neighborhood Food Drive,” 2014 Film 50 subjects Jerzy Rose and Halle Butler turn from what is often the tragedy of fundraising to what the team hope will be the bright shining success of crowdfunding.  In the vein of Rose’s earlier features, the uneasy comedies “Some Girls Never Learn” and “Crimes Against Humanity,” their pitch describes the new movie as “an anxiety-ridden film about two egomaniacal restaurateurs descending into a nightmare world with their unpaid intern. People are hurt, friendships are damaged, promises are broken, and no one does anything good for anyone else.” Sounds like a Chicago story, to be sure. Rose directs; Butler wrote the script.”It’s a spiritual successor to Halle’s out-of-print comic, ‘The Restaurant Business,’ which was first performed at Lyra Hill’s paramount performative ‘comix’ series Brain Frame almost three years ago,” Rose tells me. “The new film and that comic are small-scale disaster stories about failure, anxiety and ego—pretty universal, funny stuff, right?” Even on a modest scale, there are reasons to bring in just a little more finance.  “‘Neighborhood Food Drive’ is being produced at about the same scale as our last film, ‘Crimes Against Humanity,’ although the cast is larger and we’re flying in and hosting more people from out of town. It’s roughly twenty days of filming and people gotta eat, you know? The Kickstarter is to cover some of the Herculean costs of feature filmmaking, even when it’s still a very lean, micro-budget production.” But the clock is ticking. “We are, at this very moment, exactly two-thirds funded and we have nine days remaining. I have complete confidence in our community and our supporters and it’s been a surprising, wonderful experience running the campaign so far. I’m not used to being so public with my films before they’re made—it’s frightening but thrilling and everyone is being so sweet.” (Ray Pride)

On Wednesday, June 24, Rose and company are fundraising for the Kickstarter campaign’s final week with a free “live telethon,” at the Nightingale, 1084 North Milwaukee, at 7pm, featuring films from collaborators and cast members, as well as Lyra Hill, the film’s star and 2014 Film 50 subject, doing a live read of part of the script. The Kickstarter link is here. UPDATE, July 24: “Neighborhood Food Drive” film exceeded its Kickstarter goal and as of today is halfway through principal photography.