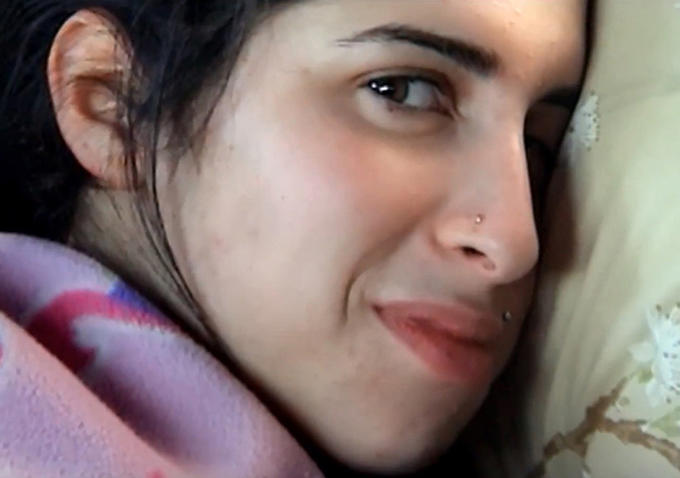 Asif Kapadia’s enveloping, harrowing, even revelatory second documentary with a posthumous subject is a musical, a tragedy, and a major mash-note to the too-soon-gone talent of Amy Winehouse. “Amy” also portrays a woman who was not so much an addict as someone consumed by feelings, the need to express them, and by brutally intense sensations of love.

Kapadia chose not to shoot video of Winehouse’s friends and family and collaborators. “Previously, I’d made a film called ‘Senna,’ done in the same way,” Kapadia tells me on a Chicago visit. “So it’s like a development, a continuation of that style. The only interviews where I took a camera along, it’s only a couple, it’s people like Tony Bennett and [music producer] Mark Ronson. Everybody else, it was just audio. The intention was to never use the picture. Also, these people have never spoken before. Most of the friends and her first manager and the band members, ninety-five-percent of the people have never been interviewed, never sold a story, never written a book or been on TV. The process was quite long, and a quite painful process for them. It became almost a therapeutic process, just me in this room, a microphone on the table, just the two of us talking, turn the lights down. The worst thing in the world would have been to turn up with a camera crew. But it’s the first time they’ve spoken, you can hear the emotion in the voices.”

Kapadia exploits bursts of paparazzi photos and, later, video, for the film’s own ends and, in a way, redeems the imagery—we’re thrust into the center of Winehouse’s pain. I wondered what implications were considered in using these photos and this video, a huge part of what made her unhappy? “For me, the idea is that as a director, you use all the tools that you have at hand to tell a story, it’s about a big picture. The big picture is the story about Amy, and Amy’s experience, a big chunk of it, was how she was hounded by, portrayed by the media and the paparazzi. To then say, we’re not going to deal with that, we’re only going to somehow talk about it, but not show it at all? If there is a camera there, I want to put the audience in the middle of it all. The only way to do that is to use that material. I’m fully aware of it, we were fully aware of it at the time, we knew it would come up. But the big picture is, it’s quite visceral to be in the middle of it. It’s scary! Unless you actually see it, feel it and experience it as if she were experiencing it. There’s no way or other way of showing it.”

There’s no one filming the paparazzi filming her. “And even if you [had that], it’s not the visceral thing of being in the middle of it,” he says. “It was a conscious decision, but there is a whole other storyline, there is a visual idea of doing it with point-of-view and how the camera is used throughout her life. So at the beginning, you’ve got photographs, you’ve got her friends taking photographs at each other, looking down the camera, and then her first manager, Nick gets a camera and films her and he’s talking to her directly, and she’s looking straight down the lens, and then she takes the camera off him and is filming herself, quietly, privately, singing to herself. And then her husband has a camera, and she becomes famous, and she’s on TV shows, and she’s singing into the camera, and then that changes as she becomes famous, she’s hounded by paparazzi. Hiding from the camera. That is just a continuation of her relationship with the lens. “

The film is cannily structured so that events in Winehouse’s life are paralleled by her songwriting, which we first see as words ink-scrawled on lined paper. The effect makes her songwriting feel more haunting, but seldom seems reductionist or Psych 101, as if the songs explained her life fully. One haunting line that recurs is the plaintive plea, “You should be stronger than me.” As assembled here the raw materials offer the satisfactions of a fictional narrative. “We’re making a genre!” he says, smiling. “On both films, on ‘Senna’ and on ‘Amy,’ I’m sitting with the editor going, ‘I don’t know what type of film did this.’ But my reference, which doesn’t necessarily make sense to everyone, my background is Indian, I’ve always felt, this is a musical. In India, the musicals, you start with the songs, and the songs are the narrative. And everything is built around that. And the songs are actually released before the movie. People know these songs, they’re huge hits, then they make the movie. People will go to see the movie because of the songs. And that was the reference I had, we know the songs, we’re going to structure the film around the songs, we’re going to try to unravel what they’re about, because that’s her diary, we realize quite soon. It’s all in there. Who is that song about, who’s she talking about here? Then you find a way to visualize that. So early on, there’s the song, ‘What is it about Men?’ and then ‘Love is a Losing Game,” and “Back to Black.’ Y’know, they’re all basically her life at different points. It’s a diary.”