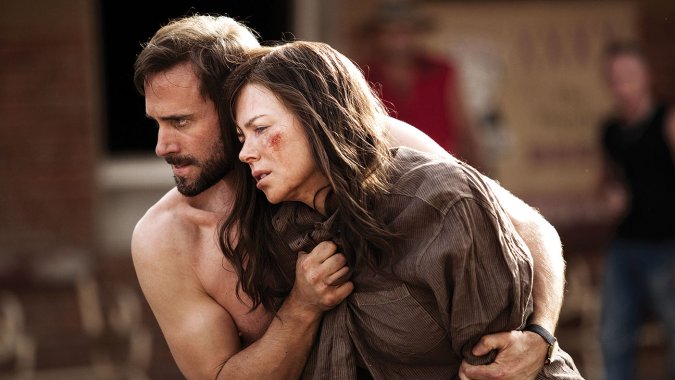 Sturm, drang, mini-“Fury Road” dust storms, missing children, sexual frustration and maybe a little more drang, are the backdrop to Kim Farrant’s “Strangerland,” a mood-heavy thriller set in the super-heated Australian outback, and starring Nicole Kidman and Joseph Fiennes. It’s nowhere the knife-edge thriller of Phillip Noyce’s “Dead Calm” (1989), with a young Kidman, but its similar willingness to wound almost makes it seem like we’re witnessing a film from an alternative universe, where Australian cinema and an iconic antipodean actress have progressed in that vein and there’s a market for the mad and bruised and downright grownup. The dual masterpieces of Nicolas Roeg’s “Walkabout” and Peter Weir’s “Picnic at Hanging Rock” are obvious gongs the filmmakers cannot reach to strike, and there are echoes of more recent movies as well, like Denis Villeneuve’s “Prisoners.” The apocryphal town of Nathgari has pent up demons to spare, and while Farrant and screenwriters Fiona Seres and Michael Kinirons fail on the plausibility meter, the actorly exertions of the handsome couple are a bleak eyeful. With Hugo Weaving. 111m. (Ray Pride)

“Strangerland” opens at Siskel Friday, July 10, for two weeks as well as on VOD.