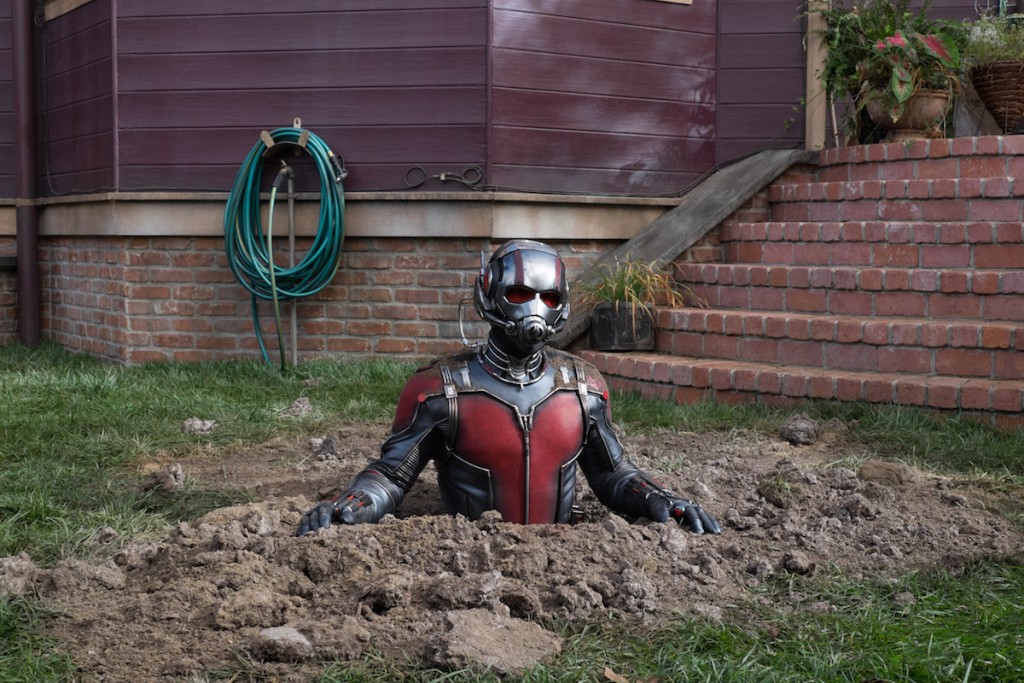 It’s been more than three decades, but I once spoke fluent Marvel. My recollection is that Hank Pym’s super-small alter ego was one of Stan Lee’s minor creations, a character whose narrative never outgrew the challenges of rendering a tiny world in a medium better suited for inscribing oversized imaginings. (In order to draw fine detail, comic book artists typically work at a scale much larger than the cartoon frame, then reduce the work to scale. This tends to favor actual, or, in the case of superheroes, super-sized, images.) Though launched as a solo act in “Tales to Astonish” (one of the referential jokes in the film that generated a surprising quantity of chuckles in the preview screening, since it dates to circa 1962, long before most of the chucklers were sketched), “Ant-Man” never made it on his own, becoming instead a founding member of the Avengers and then joining his super-brethren at the other end of the telescope, usually donning the Giant-Man or Goliath persona.

So it’s not really a tall tale to say the film surpasses the comic book—though it’s also a medium of storytelling by virtue of sequential frames filled with images and dialogue, film thrives in larger-than-life scale. At its very best, it magnifies the smallest of moments into larger truths. The depiction of our almost-microscopic world on the big screen easily blends awe and humor, attributes almost innate to the plot device, even in times of lesser CGI tools (“Honey, I Shrunk the Kids,” for example). “Ant-Man” has plenty of action to mollify the vegetative fanboys who seem to control modern movie culture, but with a twist. It’s life-and-death battle fought, for example, inside a briefcase. Instead of blowing up skyscrapers, our hero smashes into an iPhone. And that’s funny, really funny.

It helps that the script rolls with just the right amount of self-conscious comedy, thanks likely to the remnant DNA of co-screenwriters Edgar Wright (“Shaun of the Dead,” “Hot Fuzz”) and his “Tintin” collaborator Joe Cornish (“Attack The Block”),  before unceremoniously departing as director barely a year ago. Replacement director Peyton Reed, known for pleasant, if far less cutting-edge comedies like “Bring It On” and “Down With Love,” was wise to simply ride the Wright train. Also on Wright’s watch was the signing of Paul Rudd to play Scott Lang, the incarnation of Ant-Man. Unlike recent casting of supermodel types to play the likes of Captain America and Thor, “Ant-Man” draws from the “Iron Man” playbook; where Robert Downey, Jr’s Tony Stark is a smart-ass playboy, Rudd’s an affable everyman with a deep reserve of self-deprecation. But the best bits are given to Rudd’s “henchmen,” a modern-day “Three Stooges” fronted by the hilarious Chicago-born Michael Peña, alongside another Chicago-trained actor, David Dastmalchian (see this spring’s “Animals”) and the rapper T.I. Heck, I’d give them their own film, too. It’s the Marvel way after all. (Brian Hieggelke)

“Ant-Man” opens Friday, July 17. Reviewed in 3D, which seems to add little to the film other than the annoyance of having to adjust plastic eyeglasses throughout.