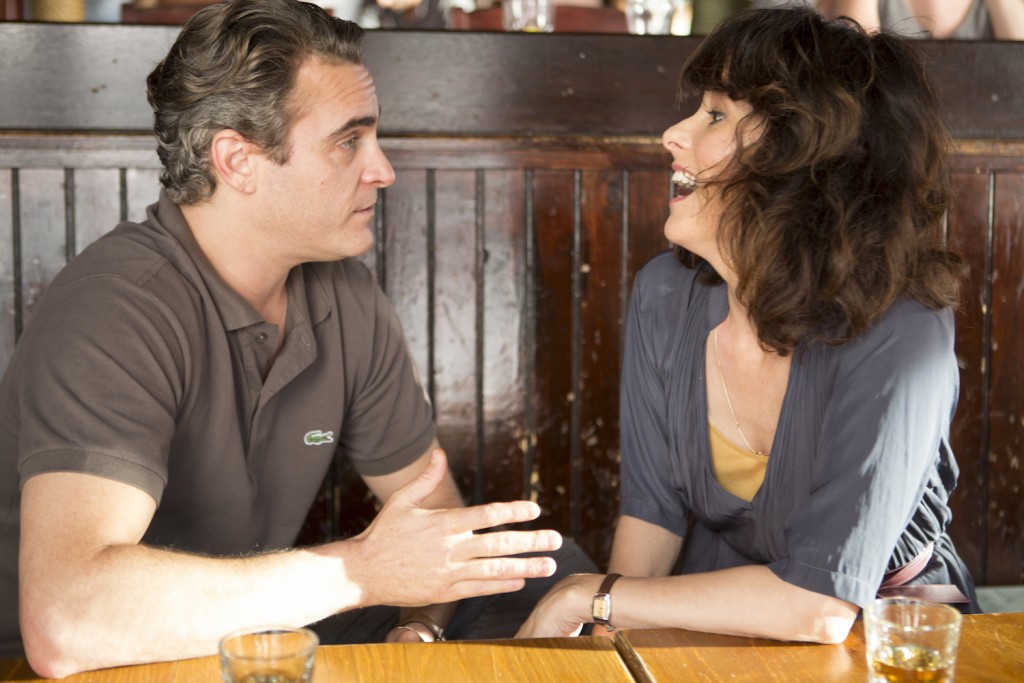 Depressed, drunk, Falstaff-bellied philosophy professor Abe Lucas (Joaquin Phoenix) takes a gig at a small-town Rhode Island college, where his mumbling recitations of platitudes of 1950s collegiate existentialism curricula woo the women, including married Rita Richards (Parker Posey) and undergraduate Jill Pollard (Emma Stone). But he’s shit in the sack, unoriginal in his thinking, and ready to Russian roulette his way into readily forgotten campus lore. He’s an oblivious, serene sociopath. (Phoenix finds a walk for Abe that’s part Chaplin, part Mr. Potato Head.) While Abe mutters of his ennui at a diner with Jill, the pair overhears a wrong against a family, committed by a family court judge. Call it “Strangers on a Train of Thought,” or, “Shadow of an Oeuvre,” or just leave the setup as a discomfiting reminder of Allen’s own unfortunate legal history. Abe will brighten his life by addressing this blight. With his personally annotated “Crime and Punishment” at hand, he sets his plot in motion. As in much of late Woody Allen—the seventy-nine-year-old writer-director has embarked on his forty-seventh feature—the wisecracks are flat, there’s no lilt to the dialogue, little characterization in conversation. The actors are everything. These scripts are skeletal in the extreme, like the draft a screenwriter would jot to nail the story down, put the plot in balance, then do a little more research to make sure what’s on the page is true and good. The actors are, as is customary, in different movies, performing feats of personal investigation that do not exist in the lingo or scenario. (“I loved your essay on situational ethics”; “Paul’s at a symposium in Aspen, I’ve got great grass”; “I guess I’m not as cutting-edge as I thought I was,” and, er, “You need a muse.”) The beaming Emma Stone, who deserves better targets for such beamish beaming, does a similar job of fawning over a man near twice her age as the recent “Magic in the Moonlight.” Parker Posey, just cast in Allen’s current project, is a force of ill nature, mannered, malicious and wholly captivating as another academic who cheats on her husband with Abe. Darius Khondji moves the widescreen camera more often than in recent Allen, nudging more often than usual, niggling reframing that seems anxious instead of implicating anyone’s morals (as Jean-Luc Godard famously invested in a philosophy of the tracking shot). The interiors of the out-of-Manhattan locations distract, too, less genteel or well-heeled than steeped in an immaculate ordinariness, bright but sedate. The dark drama is largely scored to jaunty jazz needle-drops from Ramsay Lewis, offering a disjunctive cheeriness to the material, which has led some to think they’re watching a comedy. At a press conference, Allen riposted, “Maybe they give me credit for being amusing when I’m really being inept. Hey, if it gets a laugh, that’s great. It’s how I set my table.” 97m. (Ray Pride)