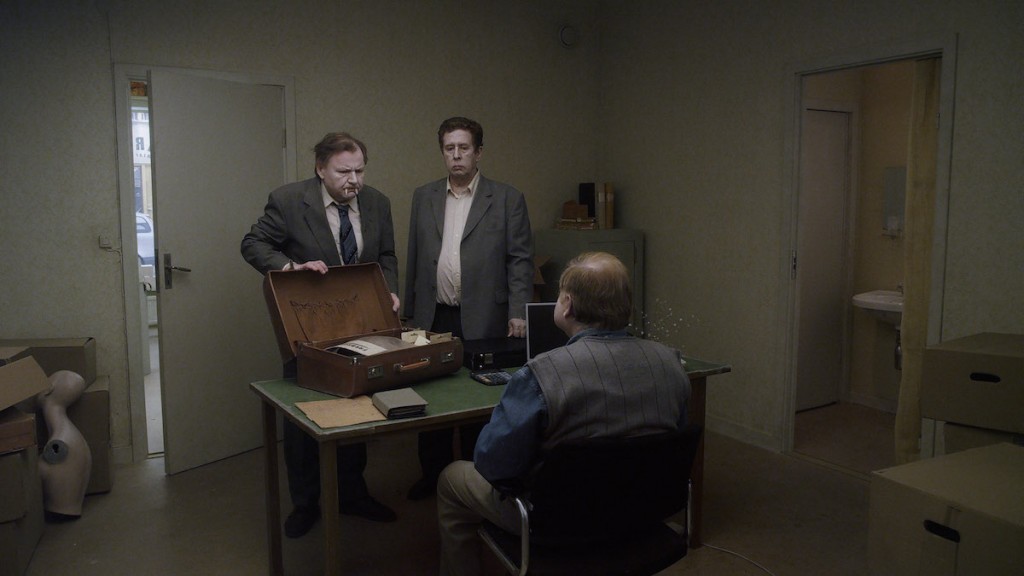 (En duva satt på en gren och funderade på tillvaron) Swedish bespoke slowpoke Roy Andersson’s latest apocalyptic comedy, “A Pigeon Sat On A Branch Reflecting On Existence,” four years in the making, is lovingly tragic and relentlessly cruel. How to describe his diligent, painterly, madly mannered, utterly singular comic method to the initiate? As I once described “Songs From the Second Floor,” his 2000 black-comic parable of a world in unending gridlock that’s my favorite of his limited filmography, its dry wit suggests Terry Gilliam, Ingmar Bergman and Luis Buñuel having giggle fits over several pitchers of Buñuel’s Virgin Martinis. Brueghel and Bosch would likely offer consultation on the lineage of his single-take forced-perspective single-set setpieces. Andersson loosens his tableau-driven style a little here, as he mostly follows Sam and Jonathan, two novelty salesman—plastic vampire teeth have never seemed so sad—a sexually aggressive flamenco teacher and a minor apocalypse waiting to happen in a 1940s Swedish beer hall. (The flamenco scenes use percussion in a way that made me giggle unbecomingly.) Andersson cites Brueghel and the post-World War I paintings of Otto Dix and Georg Scholz as key influences here. “Brueghel specialized in detailed landscapes populated by peasants and frequently adopted the bird’s eye view to tell a story of society and human existence,” Andersson observes in his press notes. “His oeuvre also contains fantastical allegories of man’s vices and follies, using flawless satire to express the tragic contradictions of being. In ‘Hunters in the Snow,’ the birds appear to be speculating: ‘What are the humans doing down there? Why are they so busy?’” Andersson seems also to hew to Emil Cioran’s shrugging, “Better to be an animal than a man, an insect than an animal, a plant than an insect, and so on.” Philosophical comedy: alongside dozens of inspired short films masquerading as commercials (which can be found online), Andersson’s made that his life’s work. Winner of the Golden Lion for best film at the 2014 Venice International Film Festival. 100m. (Ray Pride)

“A Pigeon Sat On a Branch Reflecting On Existence” opens at Siskel, Friday, July 31. The trailer is below.