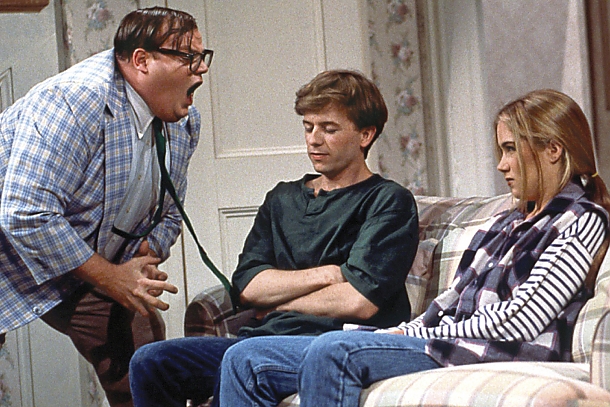 Premiering to a packed house at Second City’s UP Comedy Club on Monday night, the funny and touching documentary “I Am Chris Farley” kicked off a national tour. With directors Brent Hodge and Derik Murray in attendance, along with Farley’s brother Kevin Farley (who executive-produced) and a number of friends, the screening and post-show Q&A had an air of familiarity and celebration that suited the film. “[Chris] would have liked you to laugh more than cry,” Kevin said in a stirring introduction to the film. Despite the expectedly somber tone of the final third of the film, the audience eagerly complied, laughing through the largely linear portrait of Farley as an exuberant, natural-born comedic performer who concealed his dark interior as best as he could. Dozens of interviews provide a mix of reverence and loving deprecation that gives the film—the first on Farley’s life to be supported by his family—a refreshing air of authenticity. In the Q&A, the filmmakers readily acknowledged how lucky they were to get access to the trove of star interviews, remarking that Kevin Farley’s support made the difference. Securing David Spade (the acerbic yin to Farley’s boisterous yang and “like a brother that I hate,” according to Kevin) brought other stars forward, too. The film focuses much more on Farley’s early life and brief career than on his abrupt death. His demons are approached obliquely without ever being fully addressed. “I honestly feel everybody has their own struggles,” says Kevin, “…it’s about what we do with our lives that lasts.” More bluntly, Bob Odenkirk remarks in the film that when someone dies from an overdose “That’s where it stops being so fucking magical.” Despite some weighty moments, “I Am Chris Farley” never loses the magic. (Zach Freeman)

“I Am Chris Farley” opens on Friday, July 31 at the Music Box and debuts on Spike on August 10.