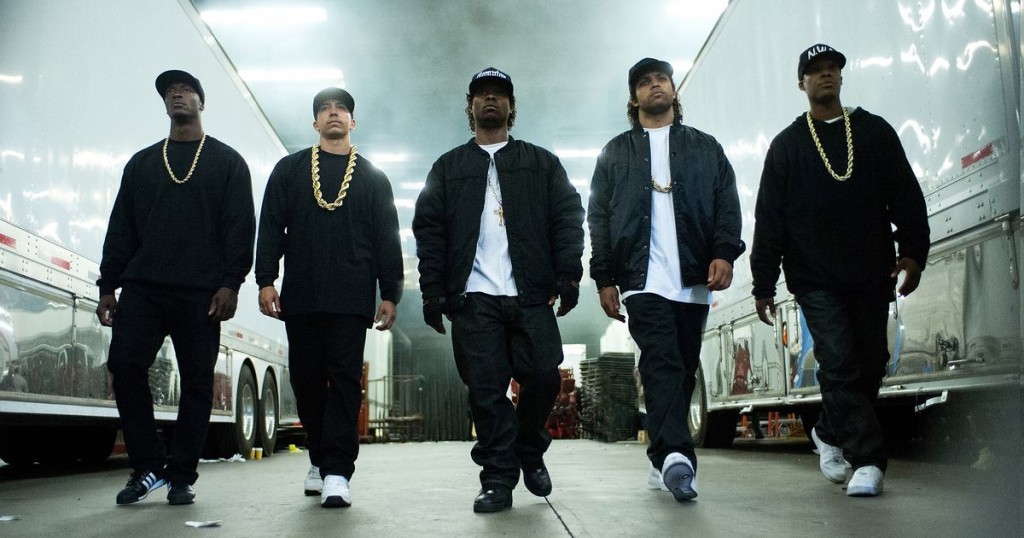 “Straight Outta Compton,” the story of Compton, California rap “supergroup” N.W.A., could have fallen flat, but even while including member Eric “Eazy-E” Wright’s first clumsy attempts at rapping, it hits the right notes. A version of the group’s origin—from E’s bankrolling of his Ruthless label and the recording of the “Boyz-n-the-Hood” single with money earned from drug-running, and Andre “Dr. Dre” Young’s beginnings as a club DJ despite disapproval from his mother, to O’Shea “Ice Cube” Jackson’s now-infamous lack of love for the police. “Straight Outta Compton” doesn’t whitewash conflicts within the group, especially Cube’s departure from N.W.A. in December 1989 after a dispute over royalties, Dr. Dre’s alliance and split with Suge Knight and Death Row Records, and Eazy-E and Cube exchanging diss tracks. Conflicts between unarmed African Americans and police have been epidemic, and it’s impossible to watch “Straight Outta Compton” without history resonating. Ice Cube and his cohort are continually harassed by Los Angeles police, which inspires him to write “Fuck The Police;” subsequently they receive a threatening letter from the FBI, protests from the public and threats from the Detroit police that they will be arrested for performing the track at a live show. N.W.A.’s history coincides with the Los Angeles police beating of African-American Rodney King in 1991 and the jury acquittal of the four accused officers in 1992. That led to riots, and the film goes farther than just showing the coverage on television, depicting two members of N.W.A. driving through the violence. While it strains credulity that they would take nice, polished tricked-out classic muscle cars into the chaos, it does underscore the point. For the most part, director F. Gary Gray largely plays the movie true to life, and elicits credible and at times moving performances from his ensemble. Paul Giamatti as manager Jerry Heller turns in a typically stellar turn, and Cube’s son, O’Shea Jackson, is suitable at channeling his father, even if he can’t quite duplicate his senior’s righteous rage. Corey Hawkins as Dr. Dre and Jason Mitchell as Eazy-E both are powerful and vulnerable when they need to be, and Neil Brown Jr. plays the sex-obsessed DJ Yella to comic effect. Humor is a welcome and surprisingly frequent element of “Straight Outta Compton,” especially given the perception that N.W.A. was a humorless, “hardcore” gangsta rap posse. The film also questions whether N.W.A. glorifies violent solutions as its critics claim, or report on it, as the group argues. But the movie doesn’t address the other Achilles’ heel of this form of hip-hop, blatant misogyny. It softens the crew’s crude perspective on women within the movie, even showing some touching scenes between Dre and his love interest and Eazy-E and his wife; but aside from that, women are treated as simply sex objects—or, worse, the butt of jokes. It may be part of the male “gangsta rap” trope, to espouse the denigration of women as merely portals of male gratification; but that shouldn’t provide an excuse, and to its detriment, the film overlooks this element intrinsic to many of the group’s raps. 150m. (Craig Bechtel)