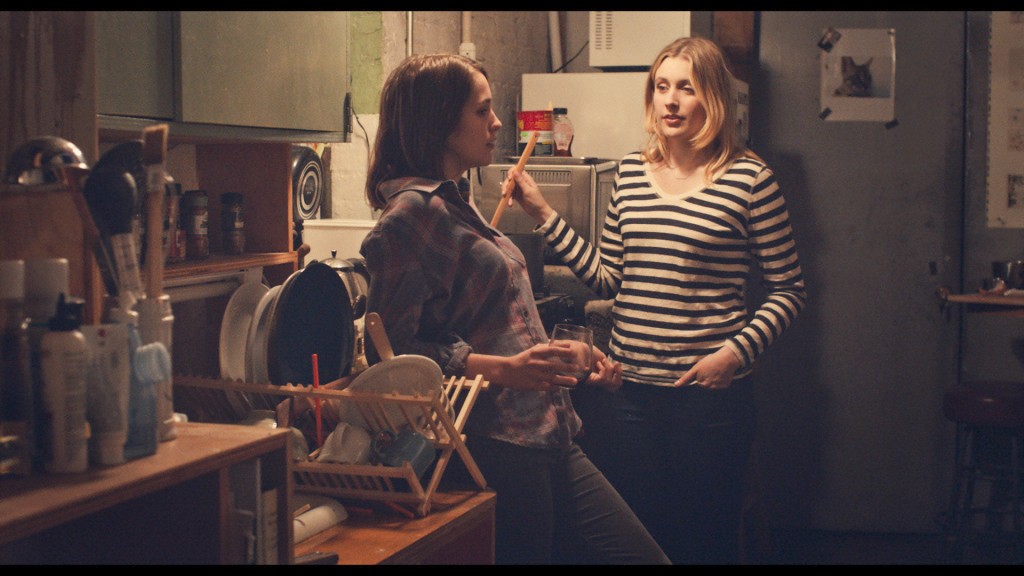 In “Mistress America,” Noah Baumbach turns muse-partner-fellow screenwriter Greta Gerwig into a delightful, deliquescent, never-defeated and never-deflated Jean Arthur for the twenty-first century, as another incarnation of her energy and off-kilter wit is unleashed upon a Manhattan-Brooklyn of the romantic mind. (You could see the legacy of the great dames like Carole Lombard and Judy Holliday, if you’re so inclined.) “Mistress America,” indeed.

For my money, or at least my mood the night I saw it, “Mistress America” landed like ten-thousand dollars of finely focused therapy. (So this is narcissism!) Gerwig’s Brooke is akin to many modern Manhattanites of the past fifty years: from somewhere else but born to the island. Or at least to the lure of the lore and the lingo. From a Times Square red-carpet entrance to late-night laughter in the warm embrace of the East Village’s Veselka Ukrainian restaurant, Brooke is many tributaries. Her finger’s in pie after pie, her identity known to all but herself, a regular whirla-Zelig-gig. She’s a perpetual-posture machine, who says things not to hear herself talk, but to offer the soft sizzle of a second’s affirmation to her listener, even if what she says is errant nonsense or rank absurdity. (How do they know this woman so well?) Tracy (Lola Kirke, “Gone Girl”) is an observant writing undergraduate new to the city who’s encouraged by her mother to contact Brooke: the women haven’t met, but Brooke’s father is about to marry Tracy’s mother over Thanksgiving.

Brooke’s got a banker boyfriend, but “my beau’s off in Greece betting against the economy or something.” Tracy and Brooke descend upon a long night of larky larks writ large, and Tracy hears just the first bursts of Brooke’s many hopes (but not yet her fears). Crashing at Brooke’s tenuous post-tenement place—“I thought it was a cool place to live, but it’s motherfucking Times Square”—Tracy, herself, naturally, the owner of an iPhone with cracked glass—witnesses the mistress of multitask fresh from sleep, petitioning her boyfriend, “Why don’t you come back so I can suck your dick and open a restaurant?” While the terrific jokes come fast and furious in binary form—“He’s one of those people I hate except I am in love with him” is another—who could resist Gerwig’s playing-innocent delivery of “Do you know what autodidact means? It’s one of those words I taught myself.” Brooke’s also taught herself an epic range of faux sophisto-speak, from “I’ll refresh our screwdrivers” to “I love filing—satisfying!”

“Mistress America” runs a trim eighty-two minutes, but there’s always time for another variation of Gerwig’s gift for pluperfect enunciations. When Brooke says simply, “I like to drink,” you can almost hear in the syllables the way she’d quick pull-gulp wine, gin, wine. Later, after Tracy’s garnished the sidewalk with the night’s refreshments, the mix of genuine concern and prickly amusement in Gerwig’s “Oh no! Did I feed you too much liquor?” is epic.

While Rohmer comparisons have been made since its Sundance debut—older director aptly detects the hardened strengths and soft power of younger women with attentive affection—Baumbach and Gerwig are exploring their own push-and-pull of modern life, with more than a little homage to cinematic forebears, especially original screwball and latter-day faux screwball (including Baumbach’s pal Peter Bogdanovich). There are also random bits of art and décor that rise well above the expected taste of a twenty-nine-year-old, including a poster for Alain Cavalier’s 1962 French thriller “Le combat dans l’île” and what appears to be another for Godard’s 1980 “Sauve qui peut (la vie).” Still, these fleeting elements, like Tracy’s sneakers that are stylish, right for her, yet dirty and beaten down, are characterization, too, with enough weighty eye candy to keep phrases like “My ex-friend and nemesis” from floating away like so many cartoon dialogue bubbles.

When Brooke’s restaurant scheme goes awry, she remains dippy yet utopian, and remembers an ex in the suburbs, now married to said nemesis. The ex used to work at Goldman, he says, when he was younger and knew Brooke, “I was the people people make television shows about.” There’s a set-piece of escalating stakes that involves at least eight characters, leading to a variation on the artist betraying the subject that’s far darker and more interesting than a similar third-act turn in Baumbach’s most recent movie, “While We’re Young.” But even that finely carpentered sequence is finessed with small details, including Tracy examining a bookshelf and quietly fingering, then pilfering an old Y-stamped MTA transit token she finds there. (Make metaphor as you will.)

“You’re funny because you don’t know you’re funny,” the younger woman says. “I know I’m funny, there’s nothing I don’t know about myself, that’s why I can’t do therapy,” the older woman says, not quite realizing that the relationship to come with one who’s turned a brief acquaintance into a telling short story called “Mistress America” will become just the therapy she needs.