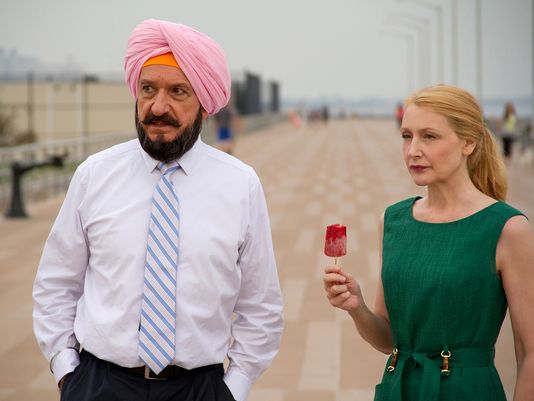 “Learning To Drive,” directed by veteran Spanish director Isabel Coixet (“My Life Without Me,” “Elegy”) and adapted from a Katha Pollitt story by Sarah Kernochan (“Marjoe,” “9 ½ Weeks”), is a modest, near-timid cross-cultural drama enlivened by two of the most live live-wires of modern movies, Ben Kingsley and Patricia Clarkson. The duo take the day. In modern-day New York, Kingsley plays Darwan, a Sikh political refugee and naturalized citizen. Clarkson plays Wendy, a book critic whose husband has left her for a younger woman. When Wendy looks for post-marriage driving lessons, she happens upon Darwan, and cultural conflict occurs, of course, as well a genteel romance of the mind and a few lovingly barbed blurts from Clarkson’s fantastically articulate mouth. There are other notable female names involved in the production, including co-producer Susan Leber (“Down to the Bone”) and editor Thelma Schoonmaker (all of Martin Scorsese’s latter-day features). The editing is often contrary, making cuts at unexpected gestures or facial movements, suggestive at first of insufficient coverage, but ultimately displaying a range of physical interaction between the characters, particularly Clarkson and Kingsley, that entices even as the contours of the story assume familiar shapes. With Jake Weber, Sarita Choudhury, Grace Gummer. 89m. (Ray Pride)

“Learning to Drive” opens Friday, August 28 at Landmark Century and other theaters.