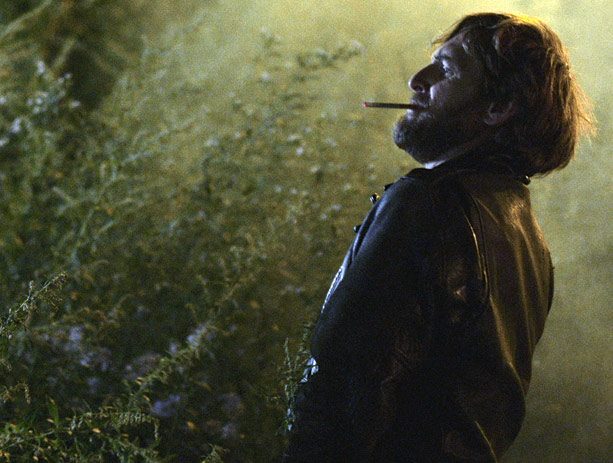 I’ve been waiting for “The Mend.” I didn’t know I was, but now I’ve seen it, I know I’ve needed “The Mend.” If you wind up feeling the same way, I hope I get to know you. John Magary’s directorial debut is dauntingly, tumultuously, blindingly, batshit great. In modern-day New York, a figure arrives in our consciousness, after the shattering shards of a hopeless, hapless shrieking match of a breakup. He has had a drunk or a few. Then we find him, Mat (Josh Lucas), on a couch, at a party, he’s all-but-homeless, a couch surfer, someone’s brother, kind of a ruffian, certainly a hairball. And a talker. He does not chat. He holds forth. He’s an American parallel to the bleak wisecracker named Johnny at the center of Mike Leigh’s apocalyptic/post-apocalyptic “Naked” (1993), beyond offensive, from bullshit beyond shibboleths, articulating misery or misgivings to everyone reluctantly around him, repellently magnetic. “The Mend” bristles with instants like this one: “You’re so cool. I’ll never be as cool as you,” a thirtyish woman says to an older friend, played pluperfectly deadpan by the great Austin Pendleton, “Oh, it’s all a charade,” taking off his crushed Woody Allen-style fishing hat, snow-white quiff spining straight up, “Don’t worry about cool.” Magary doesn’t: the black comedy and keen observation alternate with assurance and serenity. In several highly articulate interviews (and earlier articles for Filmmaker magazine), Magary has indicated influence running from the French master of tonal insolence Arnaud Desplechin, to the American-French master of dashed romanticism, Leos Carax, to making notes on Woody Allen, Noah Baumbach and even Tarkovsky. And more than one insightful observer has found allegiances akin to those in Kenneth Lonergan’s mad marvel, “Margaret.” In “The Mend,” control and chaos dance. What a reproach to mild and unassertive entertainment! “The Mend” is alive and left me feeling tempestuously alive. Magary creates characters that find life an adventure, one that’s ferocious, grandiloquent and wondrous, a sustained fantasticated fuckup. With Stephen Plunkett, Mickey Sumner, Lucy Owen. 107m. (Ray Pride)

“The Mend” opens Friday, September 11 at Facets. A trailer is below. (And the first joke is about September 11.)