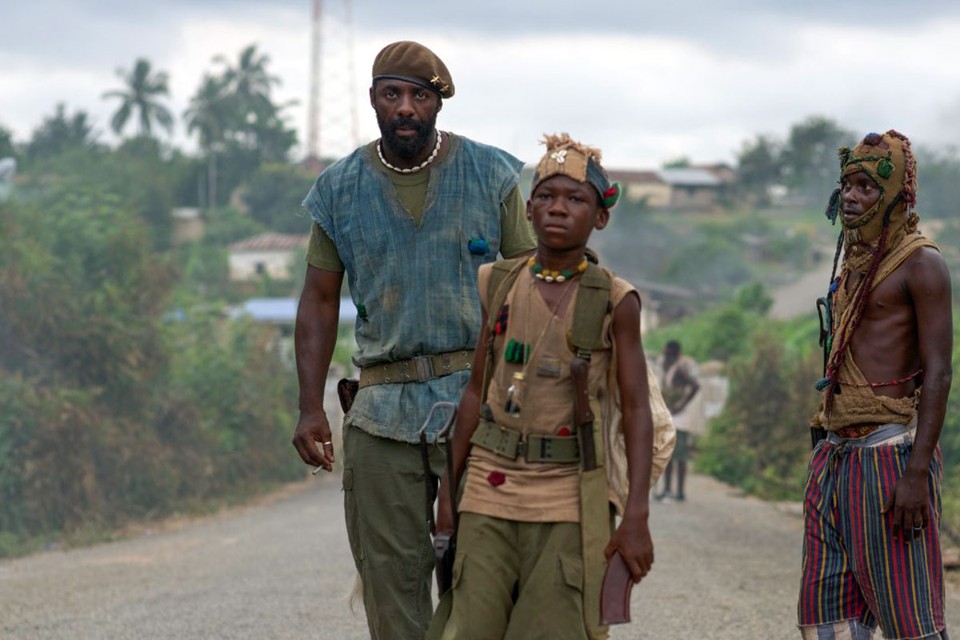 “Beasts of No Nation,” writer-director Cary Fukunaga’s follow-up to the gloom-rush of HBO’s “True Detective” is a brutal mood piece based on Uzodinma Iweala’s 2002 novel about a boy soldier in a nameless country in Africa. After rebels vanquish his family and village, young Agu (Ghana-born Abraham Attah), wandering in a forest, is recruited and under the watch of an also-nameless commandant (Idris Elba, brutal, odious, captivating), and is indoctrinated to kill while learning to sustain himself in brute circumstances. “A boy is a dangerous thing,” the Commandant intones. Fukunaga excels at visual tactics that transform debauched routine into fixating spectacle: there’s an extended battle that miniaturizes the delirium of a fabled forebear: these dazzling, dubious raptures are Apocalypse, and forevermore. A boy is a dangerous thing. Ambiguity meshes with the absence of political detail: frustrating at moments, a schema of universality at others. The ambition to create films in a school with “Aguirre The Wrath Of God” and “Apocalypse Now” will be admired. Distributor Netflix is leveraging coverage of its $12 million acquisition, and its distribution in hopes of awards season notice at a handful of theaters as well as on the streaming service, as a way to increase awareness. It’s likely as effective as attempting to market the movie with any description of the film’s bleak terror enrobed in harsh physical beauty. 137m. (Ray Pride)

“Beasts of No Nation” is now playing at Landmark Century and streaming on Netflix in the U. S. and Canada, as well as seventy-nine other countries and principalities.