I met Chicago filmmaker Patrick Thomas Underwood in the spring of 2014, shortly after he’d wrapped production on his first feature, which he’d shot nearby in Michigan. I remember being struck by the middle period of his “education,” when, after graduating from the University of Chicago in cinema and media studies, he’d headed off to Venice, Italy, for eight years of operatic training before returning to the U.S. to pursue film, gaining an MFA from the American Film Institute. That first feature, “The Middle Distance,” is one of only two American films in the New Directors Competition at Chicago International Film Festival and the only Chicago entry. It’s a work showing a patience and maturity beyond its writer-director’s experience and has nothing to do with Italy or opera. Instead, it concerns the universal coming-of-middle-age ritual of dealing with the aftermath of the loss of a parent. Neil, an L.A. consultant-douchebag, returns to New Buffalo, Michigan, to join the younger brother who never left, James, and James’ fiancée Rebecca in finishing up the disposal of their father’s cottage. I checked in with Underwood via email to ask a few questions.

The themes in the film are drawn from life experiences that almost everyone experiences: the death of a parent, sibling relationships and the pain and pleasure of “going home.” How much of this film is drawn from autobiographical elements?
My family had a summer home in Grand Beach, which is just outside of New Buffalo. I grew up spending nearly every summer weekend there. That’s the biggest overtly autobiographical element (aside from some of Neil’s less savory habits, but we can save that discussion for another time). My only sibling is a younger sister, and I’m pleased to say that my father is alive and well.

I suppose the film is more spiritually autobiographical than anything. I’ve always had a powerful sense of nostalgia, but as I’ve gotten older I’ve noticed that my experience of it has changed. I don’t yearn for a particular time or person or place. I long for a feeling—one which, over the years, I have slowly lost the ability to feel. 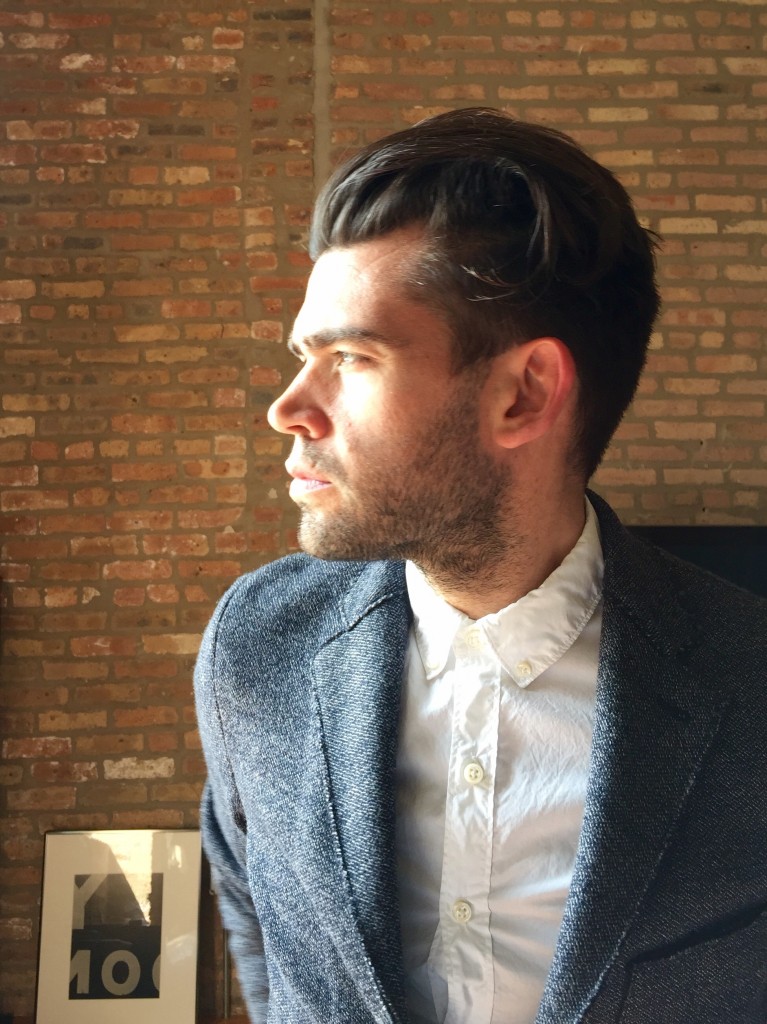 While I have trouble pinning down exactly what that feeling is or what it evokes, I believe it’s had a profound effect on the way I experience—the way I see—the world. For as long as I can remember, I’ve had an acute sense of life’s impermanence: the fleeting nature of time, the slow passing away of things. In my head, the feeling was born during those summer weekends in Michigan.

I have no idea if any of that is actually in the movie, but I have to believe that the loss of this feeling is what drove me to make it.

On a conscious level, the idea for the story itself—as is often the case with small films—was born largely from necessity. I knew I had one great location in my parents’ house in Michigan, and that I could shoot there for free. I’m also a great lover of Sofia Coppola’s “Lost In Translation” and the idea of two lost souls sort of crossing paths in the darkness. And I’ve always had a particular affection for stories about “a love that cannot be”—I’m sure I’m stealing this line from someone, but I believe that the best love stories are the ones that end badly.  (Wong Kar-Wai’s “In the Mood for Love” is another important influence.)

These three elements made for a perfect starting point: two seemingly ill-fitting people get trapped in a house together and end up falling for each other. I also think a lot about the question of whether people with especially thick armor can actually lower their guard enough to become truly vulnerable to another human being. So I changed Bill Murray into Don Draper and crossed my fingers that he wasn’t too unlikeable in the first half of the film to prevent the audience from investing in his “transformation” in the second.

There is a pervasive emptiness in the film, from the state of the house to the snowbound summer resort town to, especially, the lives being led by the characters. This also seems to manifest in a plot that hints at twists that unexpectedly never happen. Can you elaborate on all of this, and how you decided on a tone for the film? More importantly, how miserable was it shooting in a Michigan winter?
I cannot describe in words the misery we endured while shooting this movie. I urge everyone to buy a ticket to the film so they can see for themselves! The real problem was, it wasn’t just any Michigan winter. We shot during the Polar Vortex. It was thirty-five below. That morning, we were outside for six hours. It was thirty below a few nights later, when we shot outside for over three hours, wrapping well past midnight. The temperature only made it past twenty-five one time; five was far more common. But we managed to get what I thought the film needed, which was exactly that sense of pervasive, inescapable cold you mentioned. That, and a lot of snow. Needless to say, the fortitude and dedication of our entire cast and crew was absolutely remarkable. No one makes movies like this for the paycheck.

The emptiness involves a few different things. Neil seems to me like a deeply empty man. A shell of a person, really. And I think that at some level he’s aware of this: the old distractions—work, whiskey and women—aren’t working as well as they used to. I think he travels to Michigan in the (probably unconscious) hopes of recovering some past version of himself; a lost version, one that he associates with this place. (Speaking of autobiographical elements…) And Rebecca isn’t all that much better. I feel like she lives in constant fear of being unmasked as some kind of fraud; of seeming to be one thing while actually being exactly its opposite. (I want to be clear that I’m not saying she is a fraud, only that she believes she is.)

So we have two characters plagued by the belief that they are inherently less than, that in some fundamental sense, something that should be there is not. But how do you photograph absence? How do you picture the lack of a thing? That was one of our biggest and most exciting challenges. My cinematographer, Kevin Duggin, and I decided to achieve this by using the space itself as a tool—creating lots of negative space by pushing actors to the edge of the frame and leaving the background in focus, going wide as often as possible and letting the terrain dwarf the characters, making frequent use of the “empty” frame which erases the actor altogether. We also decided to shoot in anamorphic (meaning the frame ratio is 2.35:1—i.e. very wide and very squat) in order to further maximize the emptiness potential and also to show our landscapes in all their wintery glory. My hope is, this will also help distinguish our film somewhat: low-budget movies usually keep things pretty tight frame-wise. We wanted to go as wide as possible.

I also knew that if we could make the audience really feel just how bleak things felt for these two characters, it would be that much more satisfying to watch them find each other—and, of course, all the more painful when the inevitable complications reassert themselves.

The tone of the film largely derives from these formal and stylistic choices. But at the end of the day, it also just boils down to taste. Most of my favorite movies distinguish themselves in the restraint with which they tell their stories. (Low-budget filmmaking has a lot of downsides, but they can also be extremely liberating: freed from the expectations of a studio, this often means not only telling the story you want to tell, but doing so the way you want to tell it.) I’ve always been drawn to this kind of approach both aesthetically and emotionally—especially when the filmmaker manages to combine it with a genuine sense of catharsis. My favorite filmmaker, the great Japanese director Yasujiro Ozu, is the master of this sort of counterintuitive approach. In spite—or, perhaps, precisely because—of his trademark formalism, his films pack the kind of emotional punch that stays with you long after the lights go up. I don’t imagine that this movie reaches those sorts of lofty heights, but it’s something to keep shooting for.

What’s next for you?
I’m currently at work on a new script, one that’s set in Chicago and that I very much hope to shoot here. The story and setting couldn’t be more different: this one is a thriller that takes place at the intersection where the world of politics and the world of the inner city collide. I’ve been researching for nearly ten months now. The first draft should be finished by the end of the year. I haven’t been this excited about a project in a long time. If you know anyone looking to invest in a movie, please give them my number.

“The Middle Distance” will have its world premiere at the Chicago International Film Festival on Friday, October 23 at 6pm, and screens again Saturday, October 24 at 12:30pm and Monday, October 26 at 2:30pm. themiddledistancemovie.com