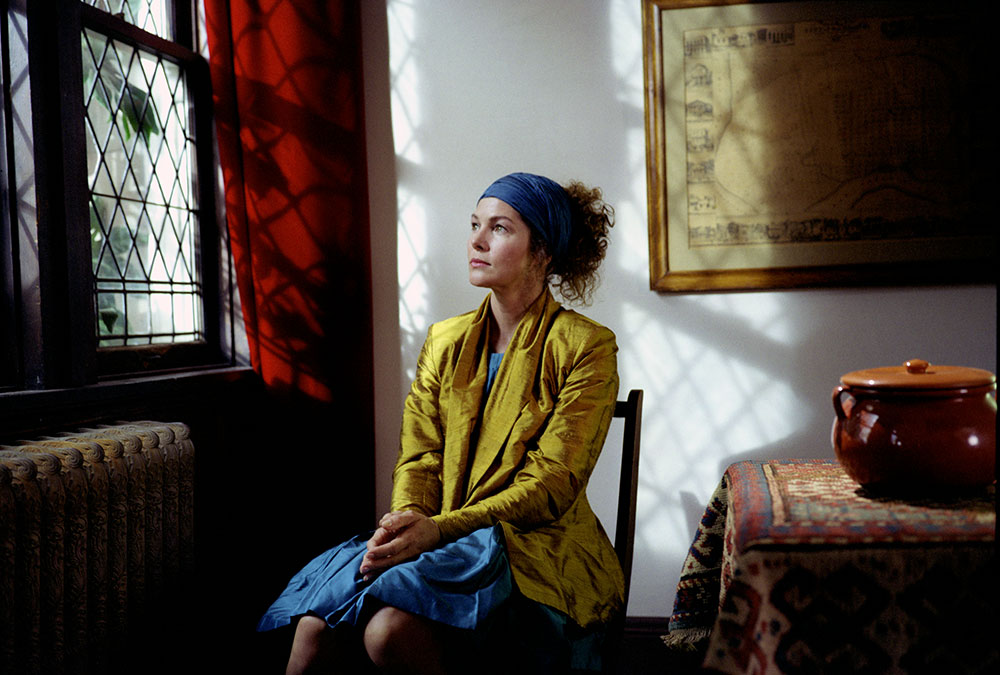 “Thank you for the days, those endless days, those sacred days you gave me. I’m thinking of the days, I won’t forget a single day…” are words sung in an emotional crescendo near the end of “Until The End of the World,” a Kinks song sungalong in the middle of the night on the bottom of the planet at what a raft of characters believe is already of the end of civilization as they know it, as Wim Wenders and his co-writers Peter Carey and Solveig Dommartin anticipate.

What appears to be a cosmopolitan picaresque moves from moment to moment to momentousness, through the wanderings of one Claire (Solveig Dommartin), from Venice to Paris to Lisbon to Berlin to San Francisco to Japan to China to Moscow to Alice Spring, Australia, fifteen cities across five continents, where finally, in a cavern on native territory, virtual reality-like images are reproduced in a blind woman’s mind. It’s an Odyssey, to be sure, but about more than a journey, including the reunion of an obsessive scientist, Dr. Farber (Max von Sydow) and his peripatetic progeny Sam (William Hurt). For what it’s worth, in German, “farber” can be a dyer of cloth, and there are colors galore in Wenders’ tapestry. (He’s also written that the noirish narrative is “Penelope decides to set out in pursuit of Odysseus.”) The threads include the anticipation of high-definition images, the first seen in a feature film, and Claire’s ex-boyfriend Eugene (Sam Neill), a novelist who narrates and refracts the movie we are seeing as a narrative he is transcribing and transforming. It’s love stories: “We are criminals that never broke the law,” David Byrne intones in the first of the wall-to-wall stretches of seductive, alternately dreamy and percussive music, and “she was in love with the idea of being in love,” Eugene narrates. It’s the most melancholy of romantic fairytales. How did the story begin? A satellite began to fall from on high and Claire began to tumble into adventures: “I broke up with my boyfriend, he fucked my best friend, I went to Italy.” And later she marvels at the motivations of her men: “Why are you so good to me? It is your way to punish me?” 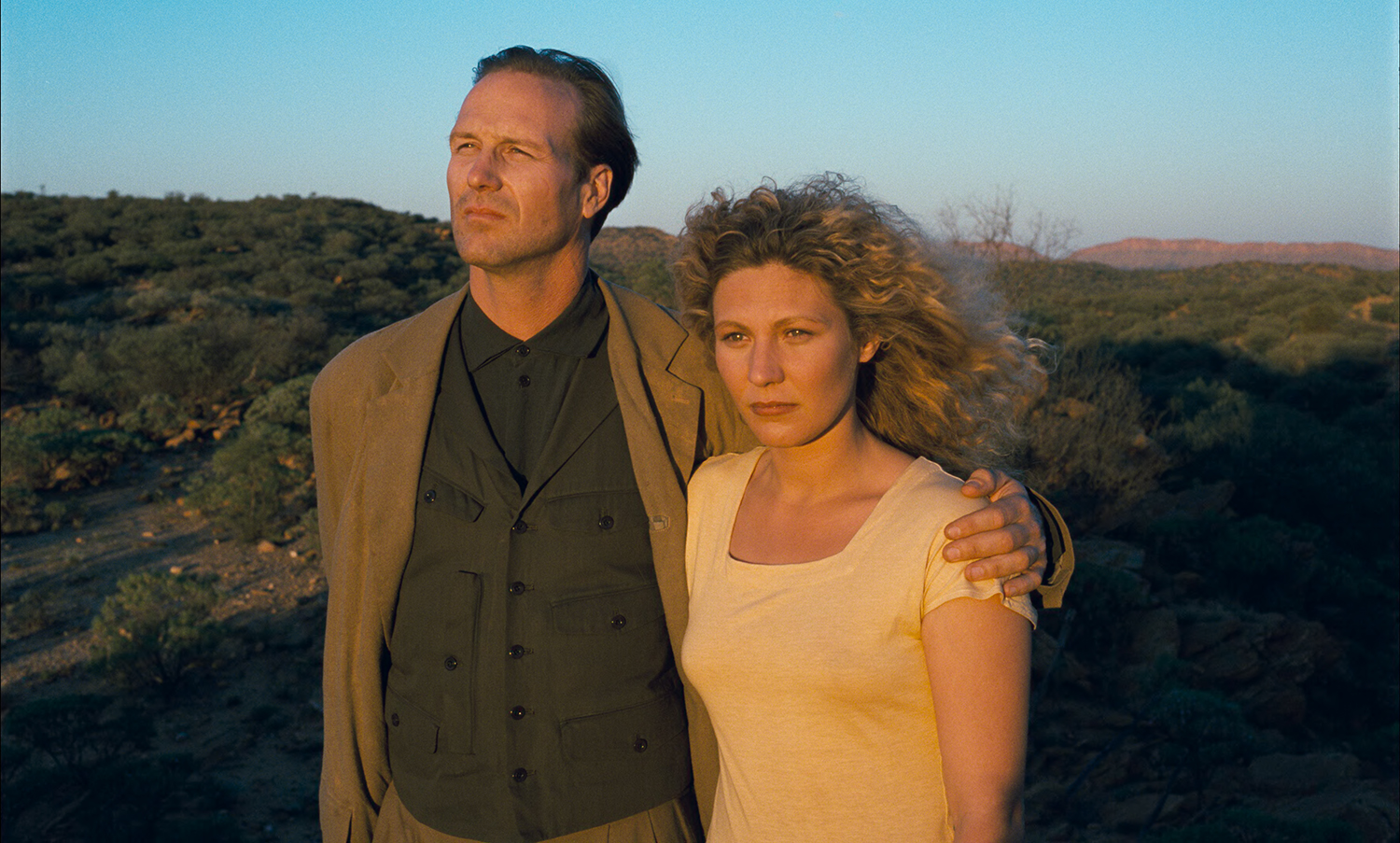 But Wenders does not punish Claire. His then-partner Dommartin extends the grace of her physical performance as the trapeze artist in “Wings Of Desire”: the way she moves! Coiled, tensile at rest, on the balls of her feet as she walks across a frame in a miniskirt patterned like a Buckminster Fuller geodesic design, she provides lithe counterpoint to the lassitude of other characters. She begins as a sybarite in a black Louise Brooks wig with architectural bangs: when she whips it off, a cascade of thick blonde curls erupt and the film is freed, just as in Wenders’ “Kings of the Road” when the narrative was loosed only by a character taking a seriously successful shit on a beach, each figure freeing themself physically to whatever may come next.

Now a lustrous epic masterpiece of effortless science fiction, with giddy film genre borrowings, and futuristic prediction turned period piece, “World” was first released in a shorn, shattered version of 158 minutes that satisfied no one, especially Wenders. Time is of the essence: set in 1999, shot in 1990-91, released at a compromised, unsatisfying 179 minutes in 1991, Wenders’ dream is only just now released in an integral, near-five-hour walkabout.

And another form of time is of essence: below the sleek, cool, yet warm-to-the-touch surfaces of Wenders’ bold film, his years-in-thought, predicting 1999 in 1990, anticipates 2015 and beyond. The world’s fears of end times come with the descent of an Indian nuclear satellite into the atmosphere, where the United States threatens to detonate it mid-air, which could cause a worldwide electromagnetic pulse, wiping the memory of all the machines. The fear of “Y2K” had not yet made the news; the personal computer browser was a couple of years from introduction, although “World” uses “Russian software” like latter-day apps doing the work Google (launched 1997) does now. Autonomous cars ply neon roads of Tokyo. Suicide bombers release propaganda video before killings. “In the beginning was the word. What would happen if only the image remained in the end!?” someone exclaims. Most disturbingly and most prophetically, characters grow obsessed with images they stare into on handheld devices, images from one’s own dreams as harbingers of mental illness. But in the end, as Eugene narrates, Claire overcomes her “deep well of narcissism” and there is a delirious moment that should be laughable, but it is instead the perfect place for Claire to celebrate her thirtieth birthday, which I’ll hint at only as an angel’s flight. A single day after a single day, after nearly twenty-five years of sacred days before “Until the End of the World”: a great and poetic and caring film has arrived at last.

“Until The End Of The World” plays at Siskel November 20-21. A melodramatic trailer for the truncated version is below, looking nowhere near as rich as it does today.