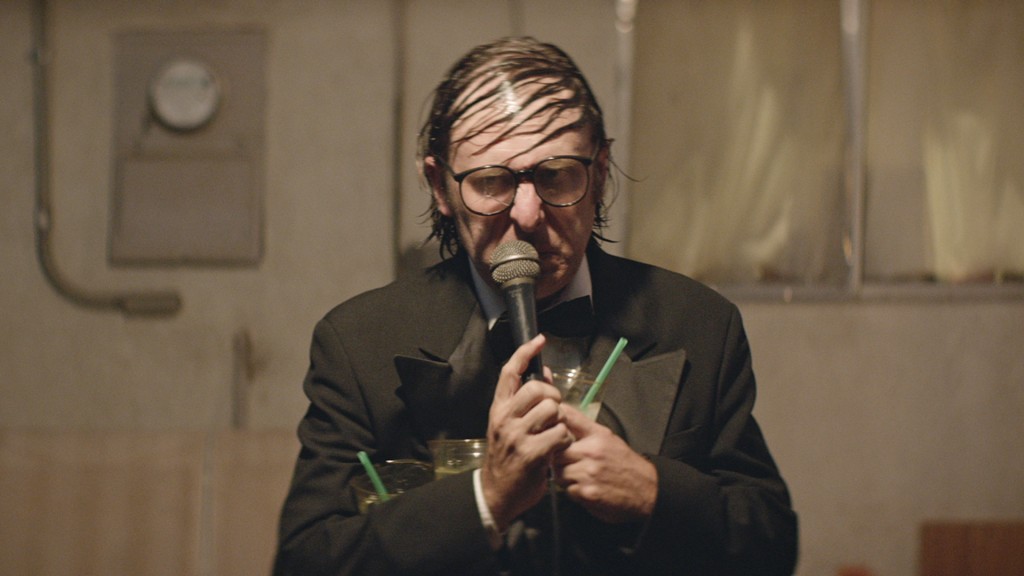 Is the title ironic, blunt, provocative—what is this thing called “Entertainment”? Plangent existential horror of an excruciating order, Rick Alverson’s “Entertainment” may have been the most difficult movie at Sundance not to bolt from in heaving sobs commingled with hapless howls. It is to suffer. An unholy reckoning of Gregg Turkington’s most failed of failed-comics-character Neil Hamburger, the can’t-go-on-must-go-on despair of Beckett, the fractured, broken-down landscapes of Don DeLillo’s novels or an Antonioni film, “Entertainment” places hysteria front-and-center in “hysterical” and “scream” into squeamish. Turkington lavishes his scalp with unguent and spray, dons a comb-over as skullcap, drinks and drinks from so many cocktail glasses, wanders through unlikely tourist attractions consisting of ruins under the bright desert sun, by night telling his brutal insult jokes to audiences who have armor for skin, and late, late at night attempting to reach his young daughter on the phone. It’s the closest emulation of a waking nightmare in an American movie in a very long time. The anxiety is generalized, but it’s also as specific as Hell. Other characters on his rounds of slummy bars and prisons are inhabited by Tye Sheridan, John C. Reilly, Michael Cera and Amy Seimetz, all game for the drier-than-dust deadpan of the script by Alverson, Turkington and Tim Heidecker. “Entertainment” is a step up from “The Comedy,” Alverson’s third feature, moving from the snap of the rude to the fugue of the void. I’d like to see it on a big screen again, if the Music Box provides seating for a full fetal position. The widescreen images by Mexican cinematographer Lorenzo Hagerman bear the precision of dreams not to be remembered. 102m. (Ray Pride)