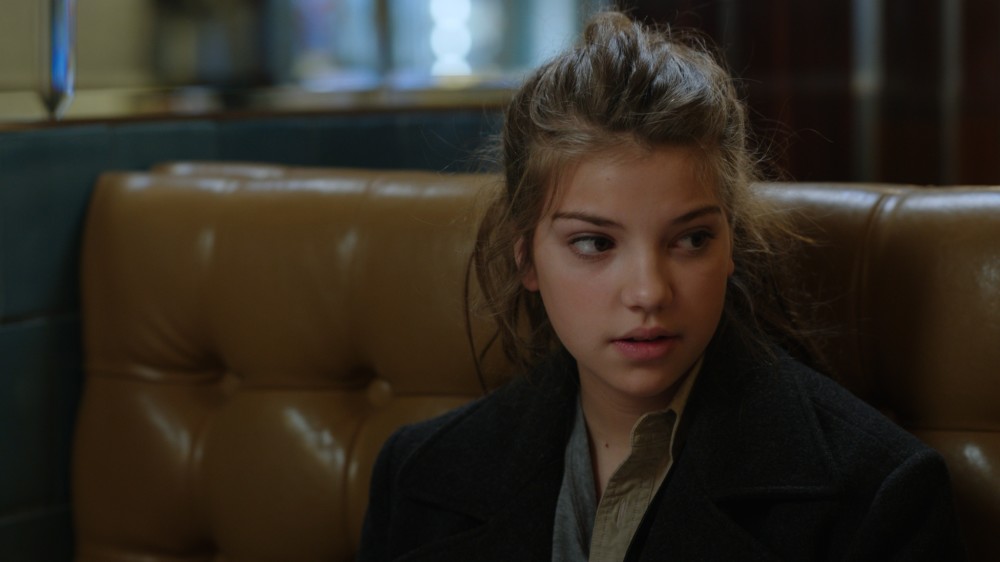 “There’s so much beauty here…” Dear heavens, there’s such microbudget goodness in “Movement + Location,” a slice of lowercase, sotto voce Brooklyn-set sci-fi written, produced, starred-in and edited by Bodine Boling, directed and shot by Alexis Boling. While she appears to be only slightly odd, with particulars like annoying, murmuring echolalia, Kim (Bodine Boling) is also a reluctant visitor, from four centuries in the future. In her day job searching out homeless adults on the street as part of “Family First” social services, she meets a young-looking, fifteen-year-old runaway Rachel (Catherine Missal) who shares the same secret. The husband-and-wife Bolings engage consistently and fruitfully with Bodine’s surmise of their thoughtfully-wrought screenplay: “Imagine that in a few hundred years, time travel does exist, but it’s a corporatized, one-way trip backwards. You go alone, and are not able to find out when exactly or even where you will land. Why would anyone go? What would the future have to be like that this is an option people pay to take? And how would they survive once they got here?” Their society is indicated rather than explained; ours is the mystery at hand. Among the neater, understated bits of dialogue: “You can trust me. That’s the price of not being alone.” And the exchange: “Strangers eat in the same place but don’t look at each other or talk”; “There’s nothing comforting about a roomful of ghosts.” Sleekly overcast and rich with keenly atmospheric, purloined-looking grabs of the city, such as along Morningside Heights looking toward lower Manhattan, and on abandoned Brooklyn streets, “Movement + Location” also benefits from a gorgeously percolating score by Dan Tepfer. 96m. (Ray Pride)

“Movement + Location” opens Friday, December 4 at Facets. The trailer is below.