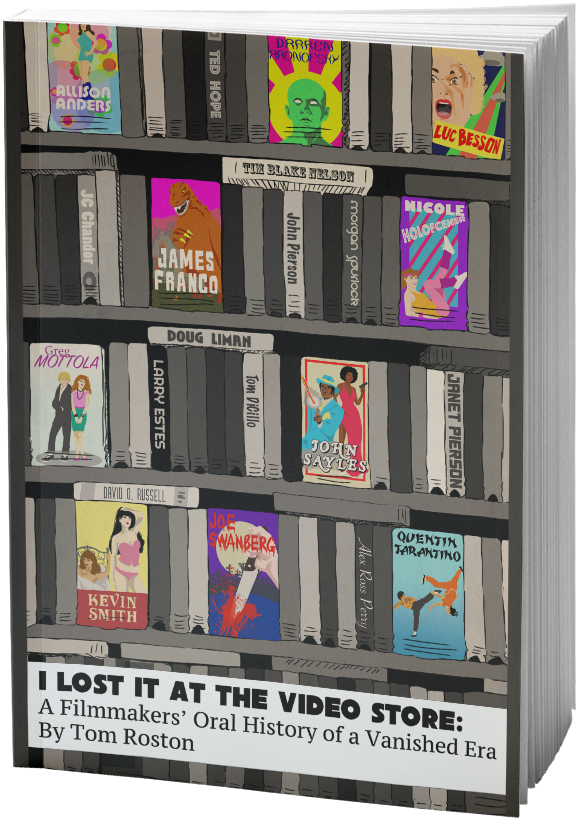 In “I Lost It At The Video Store: A Filmmakers’ Oral History of a Vanished Era” (The Critical Press, $25), Tom Roston’s lozenge-sized history covering three decades of an all-but-vanished era, filmmaker-conversationalist Kevin Smith puts it as unromantically as you can imagine. “I’m a movie lover at heart, so the quickest, easiest way you can get it to me is A-okay. I need it in me. I just need the movie in me.” But Smith is trumped by Quentin Tarantino, who says in a flurry of words, “I like something hard and tangible in my hand. And I can’t watch a movie on a laptop. I don’t use Netflix at all. I don’t have any sort of delivery system.” Tarantino adopted his very own videotheque atop his vast collection of 35mm prints. “I have the videos from Video Archives. They went out of business, and I bought their inventory. Probably close to eight thousand tapes and DVDs. I have a bunch of DVDs and a bunch of videos, and I still tape movies off of television on video so I can keep my collection going.” There are more morsels within the generous white space of Roston’s 153 pages. (Roston was an editor at now-defunct Premiere and blogs as “Doc Soup Man” at PBS’ POV documentary website.) At the Music Box on Tuesday, December 8, after a 7:30pm screening of “Reservoir Dogs,” Roston will talk about his book with several guests, as well as the role video stores played in the creation of Tarantino’s first completed feature. (Ray Pride)