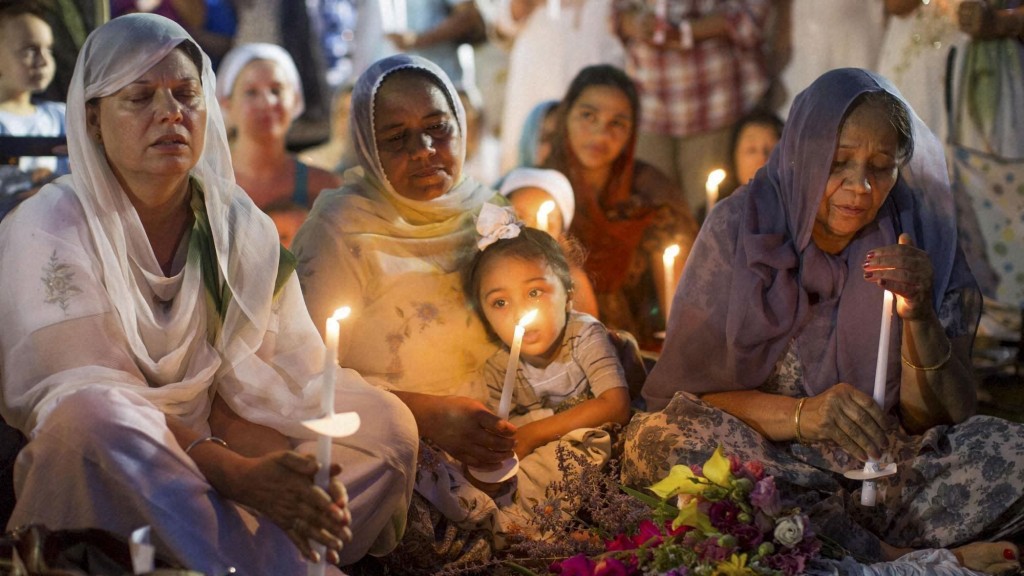 One year after the hate attack, the Oak Creek community comes together at The Sikh Temple of Wisconsin

Patrice O’Neill has followed hate crimes since reporting twenty years ago on the ground in Billings, Montana. “One town can learn from another’s tragedy,” she observes. As The Working Group’s “Not In Our Town” executive producer, she will show their documentary short “Waking in Oak Creek” as part of the Chicago Public Library’s One Book, One Chicago on December 10. Produced in 2014  in conjunction with the Department of Justice COPS Office, “Waking in Oak Creek” profiles efforts made by local law enforcement, faith leaders, community members and youth to rebuild trust, connection and understanding among Sikhs and other members of a suburban community in the wake of a horrific crime. On August 5, 2012,  a lone gunman attacked worshippers preparing lunch just before services at the Sikh Temple of Wisconsin. The gunman, tied to white supremacist groups, took his life and the lives of six worshippers, after injuring several others, including a local police officer who was shot fifteen times. “We can’t just be sad, we can’t just be mad, we have to do something during hate crime tragedies. That’s the message of ‘Waking in Oak Creek,'” she says.

“The film is essentially a story about a community in healing where neighbors reach out to neighbors and everyone is welcomed to civil life in the wake of a tragedy,” said O’Neill. Hate crimes in Illinois in recent years have been directed by the race and sexual orientation of victims. In October 2014, a seventy-nine-year-old African-American woman was stabbed four times in the back and neck with a five-inch steak knife at a grocery store because she was seen as an “easy target” in Homewood, Illinois. O’Neill sees her films as a way to share information on hate crimes and how a community can heal, but more importantly, how to prevent such crimes. After a showing last year of “Waking in Oak Creek” in Illinois, one Muslim audience member told O’Neill he felt that Oak Creek’s fallen Sikhs had taken bullets for him.

An after-screening panel will include Patrice O’Neill, Pardeep Kaleka, the eldest son of Satwant Singh Kaleka, the president of the Sikh Temple of Wisconsin who was gunned down during the temple shooting, Chicago Police Department’s Sargent Lori Cooper, Commanding Officer of the Special Activities Section which includes the Civil Rights Hate Crimes Unit, as well as local activists. (Sarah Conway)