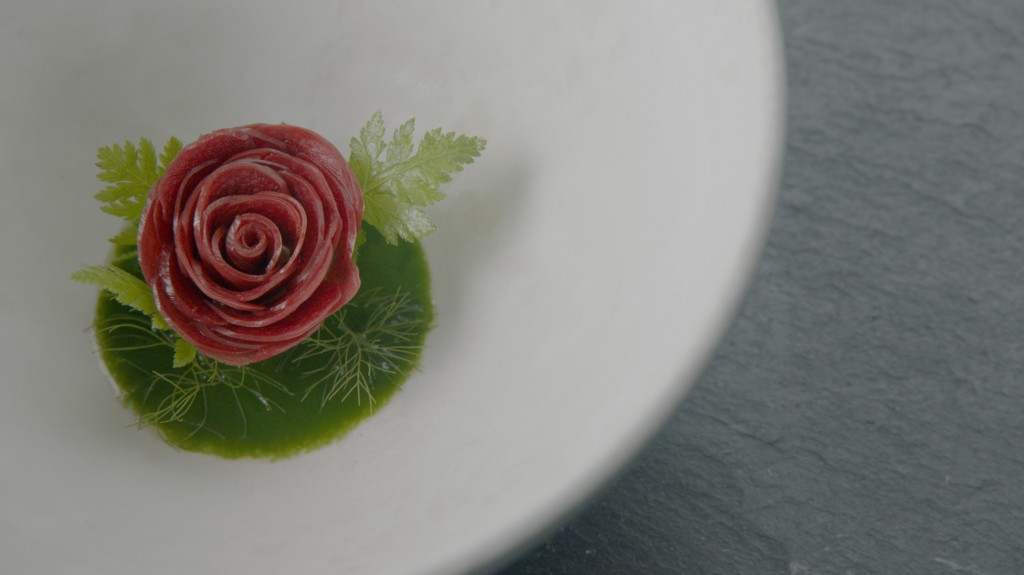 Slick but always sharp in the best contemporary European nonfiction fashion, French-born, Britain-based Pierre Deschamps’ three-years-in-the-making portrait of Copenhagen chef René Redzepi is based in part on Redzepi’s books, “Noma: Time and Place in Nordic Cuisine,” and “René Redzepi: A Work in Progress”. But Deschamps also gets into the kitchen and in the fields where the restless chef forages for local produce for his Noma restaurant, named “The Best Restaurant in the World” 2010-12 and 2014. The precision of the operation is also in steely evidence, offering glimpses of how forty-five settings are served twice a day, which the director compares to a Formula 1 team. Deschamps’ attentive observation is partly owed to his holding a CAP (Certificat d’aptitude professionnelle) in classic French cuisine, but Redzepi’s personality provides the film its tart savor as he looks constantly for fresh inspiration. Someone gets sick from mussels, and Redzepi is quietly furious with his staff, but more with a public that’s gotten the wrong impression. “Basically, we have been a filthy group of slobs who have vomited on each other and not washed our hands, because we only have cold water,” he says in one of his many to-camera moments. “That’s what everybody thinks! The norovirus happens, and everybody’s in shock. Everybody! They’re desperate. What the fuck is going on? And people are emailing you, the most nasty, fucking assholes, are emailing you, aw I was sick in 2010, we were six people, give me my money back. Like real genuine assholes.” Redzepi fears and disdains “assholes” of every stripe. But even in the year when Noma became the “world’s second best restaurant,” he works to keep his calm. “The one thing that keeps you going is the feeling that everything will calm down at one point, all your instincts telling you, calm down, everything will be okay. That, there is control in spite of everything. The perfect storm is the perfect analogy for my life at Noma.” 95m. (Ray Pride)

“Noma, My Perfect Storm” opens Friday, December 18 at Landmark Century and on-demand. The trailer is below.