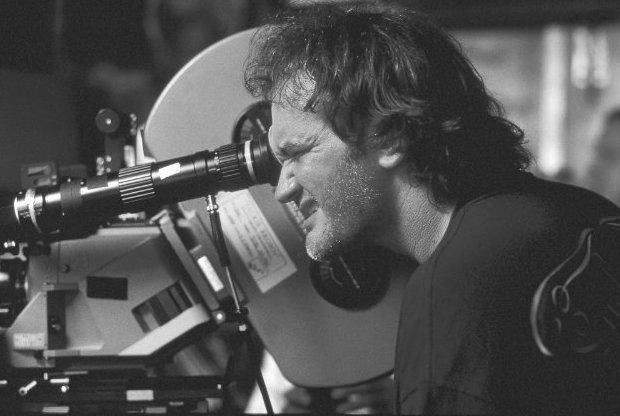 Everyone who exposes themselves to the drizzle of publicity and movie lore and personalities on parade knows that Quentin Tarantino is an excitable boy. What’s new and notable is the calm and gravity at the center of his third, newest job as director of “Jackie Brown.” Working from Elmore Leonard’s novel, “Rum Punch,” the thirty-three-year-old director, after almost four years away from directing features, still plays with his customary devices: inspired casting, sudden bursts of violence, outrageous and profane comic monologues, non-linearity of time. But the effect is more melancholy than kinetic. At over two-and-a-half hours, this genre riff will wear out most audiences, but it’s a strong career move from someone who’s realized he shouldn’t try to top “Pulp Fiction.” Tarantino’s script celebrates Leonard’s standard roster of deceitful, double-crossing, down-and-dirty losers and losers on their way back. Heading up the latter camp is Pam Grier, fine as stewardess Jackie Brown, who finds herself in trouble after getting caught coming up from Mexico with $50,000 in her flight bag. She’s carrying it for small-time arms dealer Ordell Robbie, who’s played by Samuel L. Jackson as a smooth and utterly deluded ex-con. Jackson is regal, commanding the screen, even when his words reek of trademark Tarantino-isms. Robert Forster is superb as Jackie’s smitten bail bondsman; among the other actors getting in on the loopy digressions are Robert De Niro, Michael Keaton and Bridget Fonda.

Tarantino talks fast, with eccentric pauses, unspoken semicolons and hurled-out dashes, clauses whipped around so quickly, they surprise themselves. I wondered how he decided to make such a low-key movie after so much time off. “It’s weird how people make such a big deal about that,” he says, eyes agleam. “I’m never going to make a movie every year, I’ll never be Woody Allen or Spike Lee. I have too much life I want to live in the meantime and I want never to resent the process. I think those guys are happiest when they’re shooting. Well, I’m happiest when I’m shooting, too, but I don’t want to shoot every day. I don’t need to shoot all the time. If I invest a year in a movie, y’know, I kind of want like a year back in return, of living life. It took me about a year to write this script. It’s great not having a deadline. Elmore Leonard is deceptively hard to adapt. I didn’t want to do what most movie adaptations do, all right? I wanted this to be a thing unto itself, I wanted it to have the integrity of his novel. And that takes time. To not just reduce the plot, but to actually keep his mood, his flavor, keep his thing and add a little bit of mine. All this time there was all these articles, what’s Quentin doing, what’s Quentin doing, when’s Quentin gonna do something else? Well, Quentin was writing, okay? Quentin was doing what Quentin does, all right?” He lets out his rattling giggle.

Quentin says he grew up enjoying Pam Grier on-screen. “I saw ‘Coffy’ when I was like thirteen, and like every other boy my age, I had a big old thing for her.” He followed her work as he imbibed other movies. “Her work in ‘Fort Apache, the Bronx,’ was great character work. It’s just great, great character work and no kind of acting knocks me out more than character work, leaving the person behind and diving into the character. If it’s not one-hundred percent pure, then you’ve got some crink in your armor somewhere along the line in the movie.”

After a fashion, he sees Grier’s Jackie Brown as an everywoman. “After nineteen years in the service industry, she’s worked her way down the ladder. There’s a whole lot of people in America stuck doing the same thing because at the moment when they should have left that job and gone to another one, they stayed with what they knew. And the next thing they know, they’re forty-five and they’re the working poor. That’s where Jackie Brown is, all right? Casting a black woman in her forties as this character gave it a depth. She really didn’t have any options. There’s a whole lot of people in America scared for the exact same reason. I could have been that if I had stayed in the videostore business. Pam brings a weight to that. She’s lived life and Pam also is gorgeous. She looks like she’s thirty-five and has a quality where she looks like she can handle anything. She can keep her cool when the situation gets hot. All right? Well, Pam has that in spades. That is Pam Grier.”

Sam Jackson’s Ordell is a regal cock-of-the-walk and, as Jackson jokes, “I say nigga a lot in this movie. One time, I even say nigga five times in one sentence and that’s pretty hard to do!” Tarantino’s covered this ground before. After some hesitation, he answers, “Do I have the right to write characters other than me, other races, and do I have the right to know these characters, do I have the right to have these characters talk in the truth of who these people are? I know who Ordell is because I wrote him. There’s a form of racism, strong racism when it comes to that question. If a black guy wrote ‘Jackie Brown,’ they might ask that question but they would ask it in a different way. I feel that’s racist. I feel that as a writer I have the right to create my characters. I am hindered only by my talent. And I have a talent for writing black characters all right, because they are me. These characters are me and I know the truth of me and I am writing me, all right? I will not lie. That is the number-one thing I won’t do. I will not tell a lie when it comes to my characters. ‘Oh, maybe it’s okay if you use the word “nigga” eight times, but not as many times as you did.’ Well, I didn’t realize I had a nigga allowance and I spent it all up, all right? My characters are talking and they ain’t counting their words. They say muthafucka, they do what they do. That’s my answer on that.”