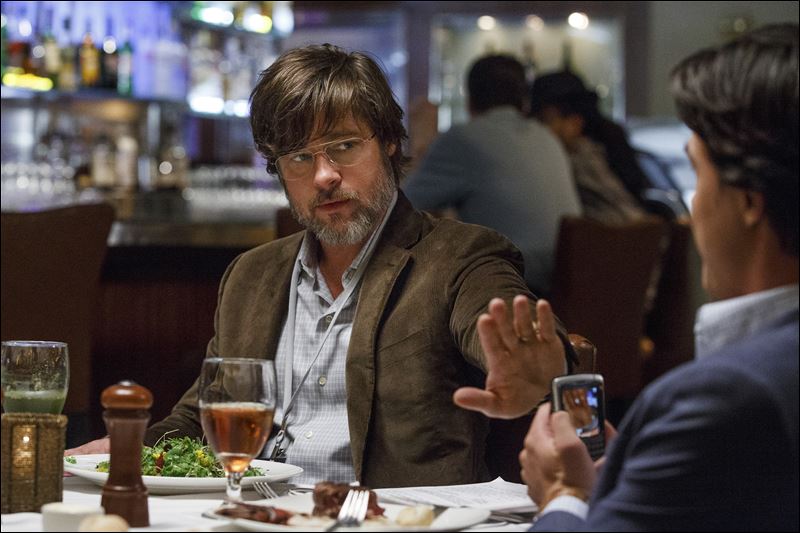 Reviewing Adam McKay’s “The Big Short,” one of 2015’s best, I called it a “bristling, bustling farce-cum-polemic,” we got a chance to talk about it a few days later while McKay was showing the film to local friends and relatives in the city where he got his comedy start. Under the handle “GhostPanther,” McKay has been a provocative Twitter user, mixing absurd observation, political umbrage and “just a little NBA,” he adds.

Your approach, the tonal riot that you’re tempting in most of your movies, and especially now in “The Big Short,” is a barrage—it’s like Twitter or the flood of other contemporary social media. But mediated. The film takes on the form avidly of the river of information that a viewer can’t necessarily interpret and can become bewildered by.
Yeah, sure. What I wanted this movie to have was, there’s been all kinds of Wall Street movies that have that kind of perfect suits, marble walls, stationary kind of look, and these guys, the heart of our story is, these guys are not like that: they’re loud, they’re anxious, they don’t make eye contact, bad clothes, bad haircuts. So I really wanted the movie to have that feeling that they had when they went on this horrible roller coaster ride. Which is why I got [cinematographer] Barry Ackroyd. So you get that energetic, anxious feeling. We wanted to infuse the movie with the kind of twenty-four-hour pop-culture noise, with the Ludacris videos, the clips from movies and the news, that’s really where the [celebrity “experts”] explaining [complicated financial maneuvers] came from, too. We wanted to use pop icons as part of that constant Kardashian haze that we’re all in. What would happen if they actually told you worthwhile things? You’re right, there is a Twitter flow to it, but also I was very happy when we started screening the movie, people were understanding the progression of the financial schemes. That bewildering wall of information could lose a lot of people. But so far we’ve been getting good reactions. People seem to get the backbone.

I don’t remember if you reference it in the facts and figures in the movie, but in concrete terms, the entire planet is worth 42 trillion dollars but there’s 225 trillion dollars worth of derivatives? Something like that?
The leverage-to-capital ratio is insane. The number that really shocked me was that banking used to be six percent of GDP and now it’s twenty-four percent. How! How did we never talk about that, for an industry that on so many levels doesn’t really produce anything, becoming a quarter of our economy? Back when they set up GDP, when Kuznetz had the big argument, he was saying, banking shouldn’t count. All this crazy shit happened in the last thirty or forty years when none of us, including myself, did not track at all. I don’t remember when Clinton and Phil Gramm got rid of Glass-Steagall. I don’t remember that being a big story. I was on SNL at the time. It should have been gigantic news. And there was a story, New York Times, bottom of the fold, I think that’s what this movie is about. A lot of this movie is like, what are we paying attention to? What do we need to be paying attention to?

And as a storyteller, how can you direct the narrative toward understanding, while still participating in the sizzle and the white noise.
Exactly. There’s nothing wrong with sizzle and white noise so long as there’s a little bit of protein involved.

[I tell McKay an outrageous anecdote about a corporate film I was paid to write in my early twenties that involves a pioneering figure in the financial industry.]
Since we started doing this movie I’ve had people come up to me and tell me some pretty remarkable shit. I had a woman in upstate New York, Pelham, actually, come up to me in tears after the movie, she’s like, “I was a whistleblower at Lehman Brothers, I was fired,” and then she told me her story and I realized I knew who she is. There are articles about her. She gives me this big hug, says, “This movie made me not feel alone.” I’m almost tearing up thinking about it. I had another guy, last night, same thing, started talking about how he was working in the risk-assessment branch of UBS, I think, he said the risk was way too much, and they fired him. Amazing, man. Maybe we should get a website for this movie where people can post stories. That would be kind of cool. There is a site, if you want to know more, with a bunch of links to financial information. It’s Paramount, it’s Viacom, so they wouldn’t exactly make it into an activist hub, but there’s good information there.

There’s a lot of jaw droppers in this movie, but when that Journal reporter is presented as so craven…
Three times those guys went, too. I had them only go once. In real life, they went three times. And they went to the New York Times twice. And they tried NPR. Every time, they were told to leave.

Makes me think of the last lines of “Three Days of the Condor”: “How do you know they’ll print it? You can take a walk. But how far if they don’t print it?” And Redford says, “They’ll print it.” And he gets the question again, “How do you know?”
I can’t believe you just brought that movie up! Pitt and I talked the entire time about how, in a weird way, this movie is “Three Days of the Condor.” That’s crazy!

“How do you know they’ll print it?” Then the slip-sliding widescreen telephoto shot moving to a close-up on Redford’s face…
I openly stole the ending of “Panic in Needle Park” for this. You know back in the seventies, when they’d end the movie, they’d still play the sound effects as the credits come on? Something so haunting about that. I said, we gotta do that for this one. “Three Days of the Condor” we talked about so much. It’s Pitt’s favorite movie. And we kept talking about how it ended, how this movie ends, that element of it. “Parallax View,” “Three Days of the Condor,” that whole period of fantastic questioning-of-authority filmmaking. We were also talking about the score for “All the President’s Men,” amazing score. We watched that, that was another one we referenced. And “24 Hour Party People,” I looked at, the breaking of the fourth wall.

And again, Barry Ackroyd as your cinematographer, a dozen Ken Loach movies, “United 93,” “Hurt Locker”…
He was essential to this movie. He was one of the first hires when I knew it was all coming together. I just did not want this thing to feel stationary; if it felt [palatial], we were dead. These were the guys with the pit stains, the inversions phone calls. No one takes you into a mundane act with more excitement than Barry Ackroyd. He can turn a phone call into a tour-de-force. It was a true pleasure watching him work. The other key ingredient was Hank Corwin, the editor [“Natural Born Killers,” “Tree of Life”]. That guy’s a titan, man, I had so much fun working with him.

You’re not doing classical continuity with multiple cameras—
Oooh, no.

—But you establish spatial relationships.
Hank is an amazing, impressionistic… To use the shorthand, “establishing a location,” doesn’t do it justice, the way Hank understands images and their rate of play. The two of us had a lot of fun just trying to get the strange energy of this movie, as it jumped genres, as it goes from being kind of a thriller to a comedy to a tragedy.

There are some movie reviewers, when they write about certain films, no better way to put it, you can tell when there’s fucking in it, who’s got a problem with fucking. The way they write about it… ewww… In this film, there are reviewers who are not seizing on a message, or saying the movie’s messy, you can almost intuit their politics just below the words.
[laughs] By the way, I’ve been through that many times. We did a movie I produced called “The Campaign.” Not the greatest movie, the ending didn’t quite work. The front half of the movie was strong, the front half is like, about the Koch brothers looking for careerist, craven opportunists to run for office for them. It lays down American politics perfectly. And I would read reviews that would talk like that, “This movie is naive about the way electoral system…” I almost wanted to call one of the critics, and go, “Oh really? What do you think’s happening right now in South Carolina? Who’s backing that candidate?” Oh, it’s the Koch brothers. Who do you think’s running against him? A guy who had a sex scandal. You’re absolutely right. I saw one review [of “The Big Short”] that was like, “It doesn’t go far enough.” Far enough? At the end, we say, here’s how you light a torch, here’s how you kick in a door, we go after everything. But it was a backdoor way of dismissing it. We knew we were going to get that from certain conservative papers. The New York Post wrote a very funny slam of the movie.

Kyle Smith?
Oh yeah. If you have a chance to read it, it’s actually hilarious. It’s more of a political hit job than a movie review. We didn’t even blink. We just laughed when we saw it. Those banks have a lot of reach, and a lot of papers are owned by banks, or owned by conglomerates that are steered by banks. So we knew we were going to get some of those shots, but overall, it’s been great, the response has been encouraging, there seems to be genuine excitement for it.