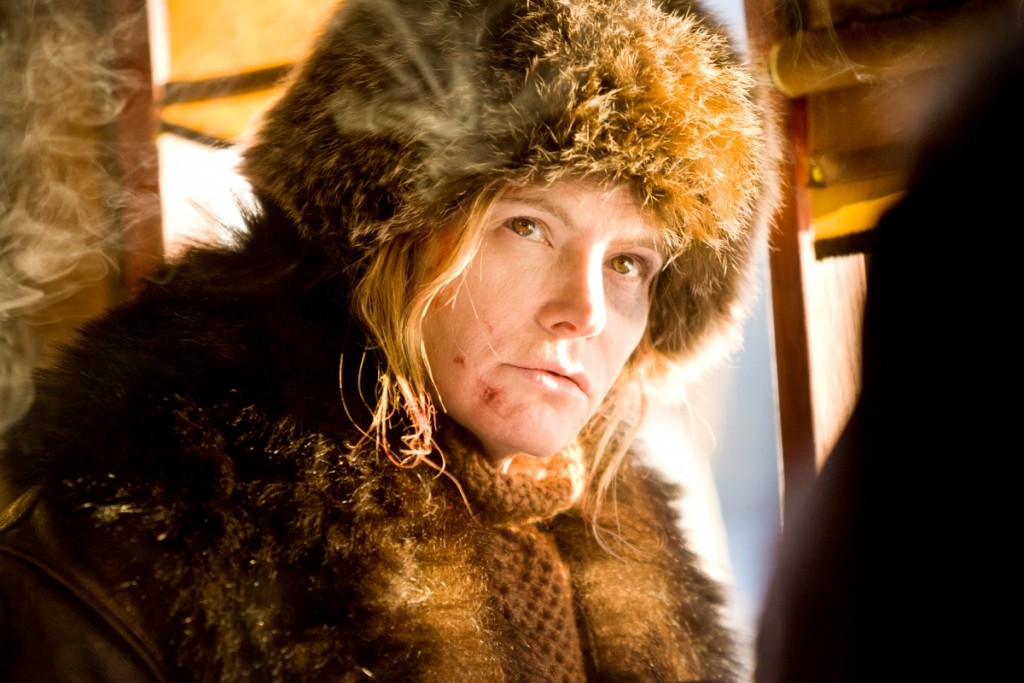 What a nasty, nasty, nasty, nasty piece of work. (Nobody’s called it “The Tasteful Eight.”) “The Hateful Eight,” the customary Quentin Tarantino mashup of influences high and low is, at the very least, an admixture of the gamesmanship of Agatha Christie’s “Ten Little Indians” (first published under the piquant title, “Ten Little N—–s”), the role reversals of “In the Heat of the Night” and the setting and explosive jolts of John Carpenter’s “The Thing.” All is artificed, from each and every spoken word, to the physical production, to the extravagant 70mm “roadshow” exhibition. With calculated recklessness and hostility, Tarantino again invokes atrocity to brandish batshit levels of physical mayhem and nervy nihilism. (Slavery, the Holocaust, this.) The violence is effective: there’s enough even before the intermission to consider an alternate title, “3:10 to Salò.” But spend a few days thinking about it rather than resting on a first reaction, “The Hateful Eight” appears to have more than malice in mind, aspiring to be about the lies we tell as a culture that is even more bent on revenge than Tarantino’s career litany of avengers. Bluster within gales, the hoodwinking words of the varmints and weasels in “The Eighth Film By Quentin Tarantino” are obstinately taboo-dandling. Hollywood’s foremost entrepreneur of slur and slander spiels a cavalcade of unreliable narrators whose closest approximation of truth comes from the blast at the end of a gun as it meets and moves past gusts of blood and great gobbets of flesh. (And of course, cocks and balls are invoked with creepy zealotry.) The dialogue alternates between the goonish and the bluntly political: for every “Well, I’ll be a goddam dog in a manger,” expect a “When n——s are scared, then white folks are safe.” Theses abound in the characters’ voice, most sounding as plummily pleased as if Tarantino were reading the entire script aloud by himself: “The good part about frontier justice is it’s very thirst-quenching. The bad part is, it’s apt to be wrong as right.” But there is an overarching visual metaphor that envelops and chills: the monologues progress under blanket of whiteness—an encroaching, enveloping, concealing, obscuring, blanketing, burying whiteness—racially-charged violence simmers and detonates with shameless splatter, slosh and spray and oh-so-chunky meaty morsels. Jennifer Jason Leigh is offered the meatiest of Jennifer Jason Leigh roles, a world away from the tender wound of her voice work in “Anomalisa.” She plays a murderess at the end of a bounty hunter’s tether, as dastardly as any of the other bastards. Her battering begins in media res, in the form of a deep black mouse punched into one eye socket, and persists throughout, largely in the shape of further jabs to the face accompanied by bracingly precise sound effects of cartilage shifting and crackling. By turns, face and hair mottled with blood and brains and poison-spiked vomit, she’s Carrie and Regan and feral above all. In interviews with well-chosen outlets, Tarantino insists she’s more wickedness in the blooded flesh than she is a woman getting pummeled. Misanthropy seeks to supplant misogyny. Sadistic genius may be at work here: few “redeeming” characteristics are on display. As Tarantino told Amy Nicholson at LA Weekly, “I’m taking these weasels—and I’m referring to them lovingly as weasels—and throwing them in a burlap bag and tying the bag and seeing what happens. There is no moral center. You see everybody’s side.” Before accepting wholesale Tarantino’s assertion of authorial valor, there’s what Adam Nayman wrote for Cinema Scope, “It’s also hard to say if I really truly believe any of the above, or if Tarantino the alien finally operates, like the Thing, by turning critics into his gibbering mirror images, passing on grandiloquence that makes us talk around what we really think… I’m also thinking that the only thing harder than enjoying or even respecting this grotesque, disturbing, potently affective and probably commercially unviable endurance test of a movie is dismissing it out of hand.” With Samuel L. Jackson, Kurt Russell, Walton Goggins, Bruce Dern, Demián Bichir, Tim Roth, Michael Madsen, James Parks, Channing Tatum, Zoë Bell. Previewed in 2.76:1 widescreen 70mm roadshow version at the Music Box, 187m with a twelve-minute intermission. The wide-release version, on DCP, is 167 minutes without an intermission. (Ray Pride)