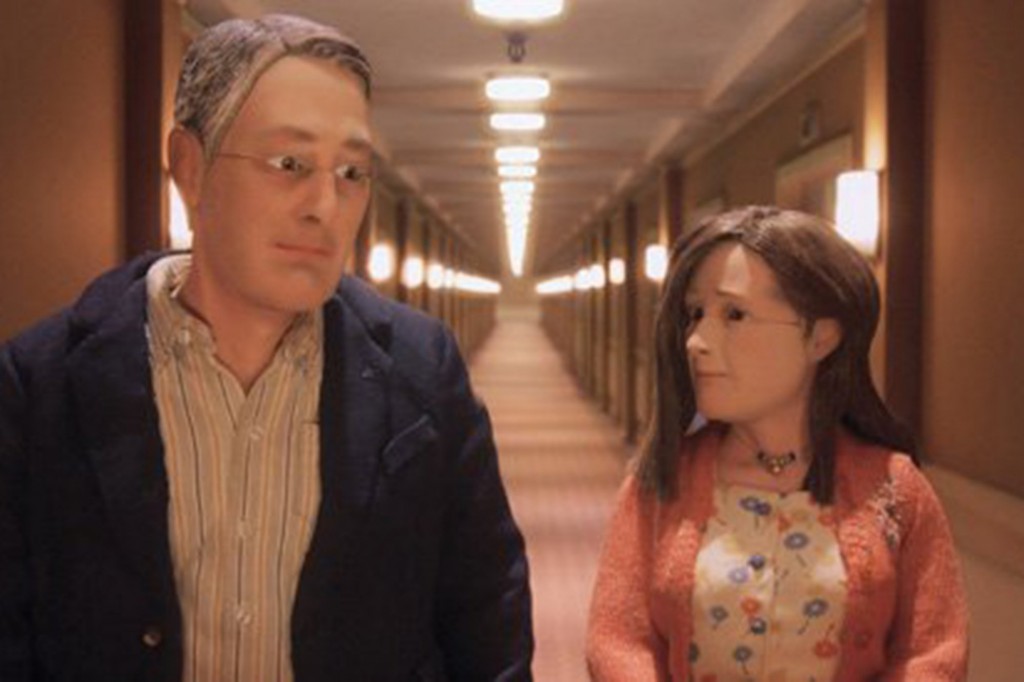 Michael is a weary middle-aged man, a motivation expert who flies overnight to Cincinnati to address a customer service convocation, where the attendees know him for his most recent book, “How May I Help You Help Them?” Charged moments come from the seemingly commonplace: A perfunctory call to his wife back in Los Angeles, an impulsive call to an ex and an ill-advised drink, meeting a sweet, younger, seemingly uncomplicated younger woman, a baked-goods customer-service rep named Lisa (a tenderly winsome Jennifer Jason Leigh) who’s admired him from afar. Simple, except that “Anomalisa” is stop-motion animation, turned to the very adult means of fleshing out a screenplay by Charlie Kaufman that began as a staged “radio play” for three voices. The combination of simplicity and intricacy make the strange, thrilling “Anomalisa” discernibly a Charlie Kaufman object, as refined and diamond-dense as his directorial debut, “Synecdoche, New York” was sprawling. We talked about the movie a few weeks ago, along with his co-director and animator Duke Johnson.

The group I saw the movie with was ecstatic afterward. How exuberant and joyous have people been talking to you about the movie?
Kaufman: Many people weep.

I teared up a couple of times.
Kaufman: But during the interviews! No, I’m just kidding.

While you’re known for concepts and language and dialogue, there’s such attention to sound design here, plus the moods of Carter Burwell’s music.
Kaufman: The radio play was about an hour. But it was just dialogue. It stretched out when we added the action and the visuals. Carter was the person who commissioned this project. He had come to the Coen brothers and to me to do these plays he would score up on stage, and I did one and they did one. I wanted to go to Los Angeles with it and they couldn’t, and so I wrote a second one to fill the space that their leaving left. And that’s “Anomalisa.”

Johnson: It started with Dino Stamatopoulos and I reading the script at [our animation company] Starburns [Industries] and thinking of it as an animated thing. Dino had seen the play, but I hadn’t, so when I read the script I had no problem picturing it as an animated thing. There weren’t scene descriptions, so I was able to imagine it in that world. We approached Charlie and asked if we could raise the money and he said we could. We went off into Kickstarter and we didn’t at this point know what it was going to look like or anything. When it was clear that Kickstarter was going to be successful, Charlie and I started talking about what this would be. The first thing that we did was record the voices, getting the same three actors [David Thewlis, Jennifer Jason Leigh and Tom Noonan], who were in the play to come and do the voice records. That set the tone for everything. It had a slightly different feel. It was the same exact script they had performed in the play, but it was a more intimate environment and the tone of that experience set the tone for what we went off and did. The visual style, we wanted it to look cinematic, we wanted it to be soulful, we wanted it to be emotional, we wanted it to be dreamlike.

Johnson: We always kept going. But it was often down to the final hour when we didn’t know if we’d make payroll.

Johnson: But it always came through. We were lucky to have a benefactor, by the name of Keith Calder, Snoot Entertainment. He came on board because he’s a big fan of Charlie. We told him in the beginning we thought that we might need like “yea” amount of money [holds hands apart] and it turned out to be “yeaaaaaaa” amount of money [holds arms farther apart]. He was cool about it.

What draws you to contention, to these pitched, disputatious moments between characters? They’re shot from different guns, but they’re still deadly weapons. Do you get joy from writing so specifically about verbally how we hurt each other?
Kaufman: I don’t know. I don’t know if I get joy from writing much at all. Occasionally I do, if I do something I like, “Aw that’s good,” I think. Usually it’s just sort of a struggle. And I don’t get particular joy in writing anything that’s people hurting each other.

Then we have the tender and true and clumsy sex scene. It’s two humans trying.
Kaufman: Yeah. Yeah, that’s what we were going for. We didn’t want it to be a joke. Which it could easily have been. And I think the expectation is that it was going to be. People expect that, oh it’s puppets having sex, it’s going to be a joke. But we really worked hard to make it not a joke. [laughs] It’s unflinching. Six months of animation for that scene!

He’s sleepwalking through a world of mass-produced luxury, designed without nuance, and then when I look up Fregoli, it might be the syndrome Michael is suffering, thinking everyone else in the world is the same. It’s there if you look it up afterward, but it isn’t like the kind of reference that would get you a “golf clap” if someone said, for instance, “synecdoche” in “Synecdoche, New York.”
Kaufman: No one ever says “synecdoche” in “Synecdoche, New York.” And originally, Fregoli syndrome was not mentioned. We just couldn’t get the name of the hotel we were using, which was Millennium, which is a real hotel in Cincinnati. I had it originally under a pen name, of Francis Fregoli. So we just swapped it. He doesn’t really have that. Just metaphorically. I was trying to figure out how to do a stage play with three actors where one of them could play a lot of parts, and I had read about this. It sparked a bunch of ideas.