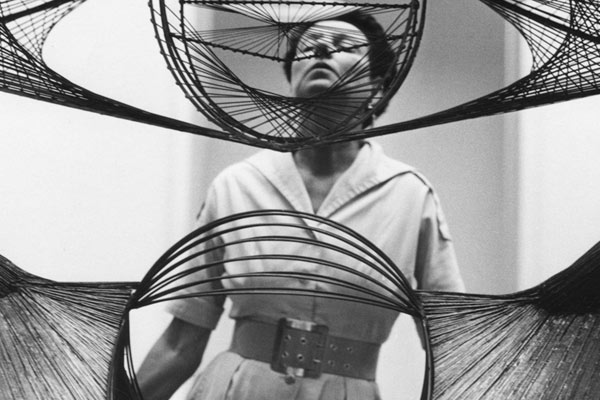 Lisa Immordino Vreeland’s second art-doc after “Diana Vreeland: The Eye has to Travel” is an eyeful and an earful. “Peggy Guggenheim: Art Addict” is a brisk, neatly constructed look behind the life of the late heiress who became one of the twentieth century’s most proficient wheelers and dealers at the top end of the art market, collecting art, but also artists along the way. And slept her way, gainfully and gleefully, through a teeming scene of Surrealists and Dadaists that included Man Ray, Max Ernst, Jackson Pollock, Alexander Calder, Marcel Duchamp, Constantin Brâncusi  and Sam Beckett. Her independence may be more impressive than the many hundreds of millions of dollars her collection is worth today. Long-lost audio recordings of Guggenheim describing her travels and travails, made the year before her death in 1979 at the age of eighty-one, enhance the telling: “I was the midwife to modern art,” she says, and in her own way, a mistress and matriarch as well. “She wasn’t someone who was especially expressive,” Vreeland says of the recordings, “she didn’t have a lot of emotion. And this comes across in the movie, in the tone of her voice.” Still, there’s so much to hang onto. Among the many diamond-ornate facts strewn along the path: her father died on the Titanic. The kindly interviewees include Marina Abramovic, Robert De Niro, Jeffrey Deitch, Larry Gagosian, Arne Glimcher, Hans-Ulrich Obrist, Francine Prose, John Richardson and Calvin Tomkins. Plus: a lifetime of remarkable modern art. 97m. (Ray Pride)

“Peggy Guggenheim: Art Addict” opens Friday, January 8 at the Music Box. The trailer is below.