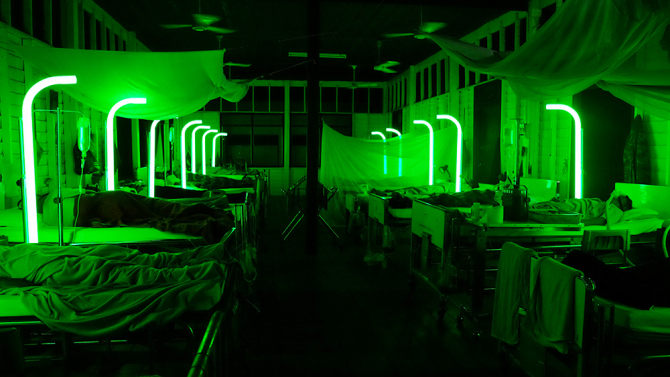 One of the most charming and recurrent of Apichatpong Weerasethakul’s statements in the past decade about his progressively more ethereal features, shorts and art installations is that it’s perfectly alright, even appropriate to nod at some point, waking at an indeterminate later moment when the world has changed (or obstinately remained the same) for his dreamers and sleepwalkers. In the latest simmering surrealism by the School of the Art Institute graduate who likes to be called just “Joe,” “Cemetery of Splendour” (Rak ti Khon Kaen), he literally engages a sleeping sickness, based on a true story, with a cast of soldiers confined to a clinic that stands atop a burial ground for Thai royals. A rich melancholy pronounces itself more readily than any apprehensible allegory. The critical term “slow cinema” quickly drapes itself upon the poetic shoulders of “Splendour,” slower, smaller, ever more imagistic than earlier Weerasethakul, like “Tropical Malady” (2004) and “Uncle Boonmee Who Can Recall His Past Lives” (2010). The cinematography by Diego García enhances the offhand lyricism of this lovely, memory-steeped meditation. Its many fragments haunt. With Jenjira Pongpas, Banlop Lomnoi. 122m. (Ray Pride)

“Cemetery of Splendour” opens Friday, January 29 at Siskel. Weerasethakul will appear at the Monday, February 1 screenings. (Some SAIC affiliates are eligible for complimentary tickets.). Below, a trailer that stands as a finished film in its own right,  from Joe’s Kick The Machine company.