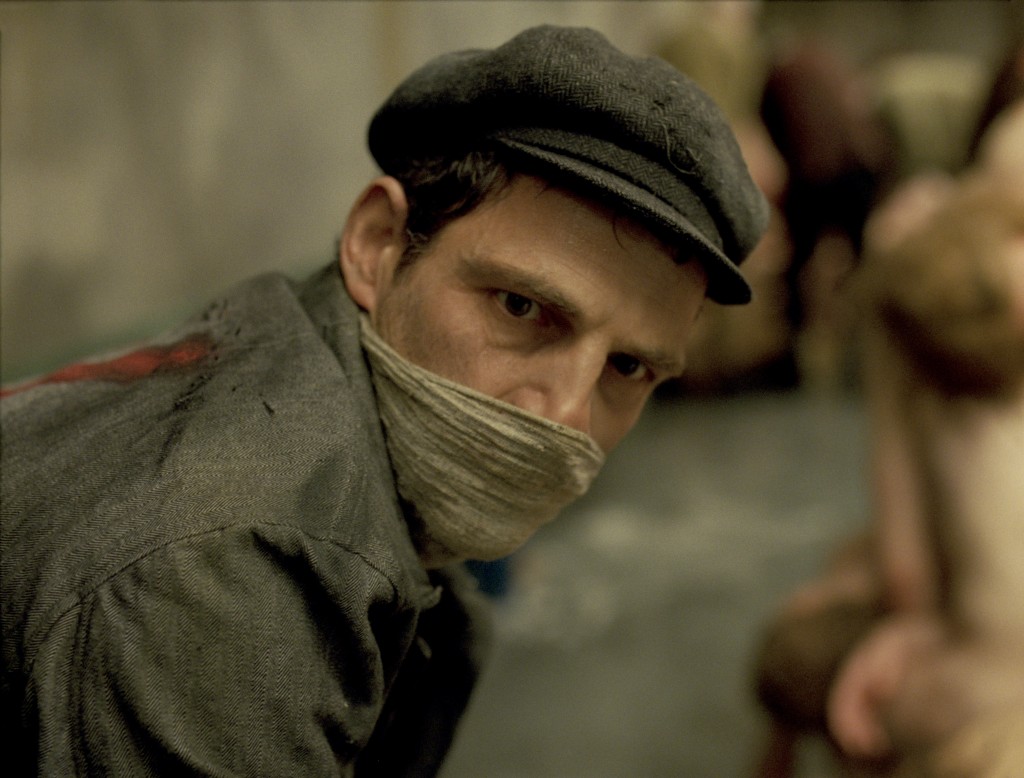 The human face; the ear, provoked. Two of the most powerful tools available to filmmakers are the human face and psychologically suggestive sound design. A couple of quotes, then, in service of glancing at thirty-eight-year-old Hungarian director László Nemes’ death-camp-set debut feature, the unlikely fable of faith “Son of Saul.” First, from French master Robert Bresson’s “Notes on Cinematography”: “The eye solicited alone makes the ear impatient, the ear solicited alone makes the eye impatient. Use these impatiences. Power of the cinematographer who appeals to the two senses in a governable way. Against the tactics of speed, of noise, set tactics of slowness, of silence.” And from George Orwell, the all-too-familiar “If you want a vision of the future, imagine a boot stamping on a human face—forever.” “Son of Saul” is set at Auschwitz-Birkenau in October 1944. The story is fable-simple. We begin in blur, and a face appears within that blur, that of Saul Ausländer, a Hungarian member of the Sonderkommando, a group of Jewish prisoners forced to assist the Nazis in the crematoria. Saul (Géza Röhrig) discovers a body of a boy, and convinced that it is his son, begins a strategic exploitation of the confines of the camp to preserve the body for a proper burial rather than consigning it to the flames. A fool’s errand? From those first glimpses of Saul, our frame of reference remains Röhrig’s shoulders, his face in shallow focus, an increasingly taut mask, deepening in pallor from moment to moment. Behind him, around him, seen in bits and pieces and heard in horrible specificity, slaughter. In the opening scene, Saul and the other Sonderkommando go about their paces in drawing men and women and children from trains to corridors to the “showers” where a metal wall is drawn, and pounding, wails, the sound of flesh hoping to shear at metal rises and the image cuts to black and the main title appears. The moment is a tour-de-force of simplicity and discretion. And we return to Saul’s face, where we will largely stay for the rest of the film, until its conclusion: both in murder and in a dream of a placid wood. Nemes’ learned his trade assisting his Hungarian compatriot Béla Tarr, and his use of exclusion, occlusion and camera movement builds on his patron’s example. “The sound designer, Tamás Zányi, who has worked on all my films, and I decided to work on a sound that was very simple, raw and yet quite complex and multidimensional,” Nemes says in the press kit. “One has to be aware of the very particular sound atmosphere of these hellish factories. The multiplicity of tasks being accomplished, shouted orders, screams and many languages were all intermingling: the German of the SS, the multiple languages spoken by the prisoners, among which was Yiddish, and those spoken by the victims who came from all over Europe. Sound can superimpose over the image, at times even taking its place, because some images are missing and rightfully so. I would compare it to diverse and sometimes contradictory layers of sound. And all this sound material needed to remain raw. It was important not to re-produce it or polish it.” Also unpolished: the brute, haunted furtiveness of Géza Röhrig’s Saul. Röhrig is a Brooklyn-based Hungarian writer and a poet, but his handsome-yet-spent features are as central to the success of “Son of Saul” as sound or image. So many of the film’s silences speak against the tumult of torment. “Son of Saul” is Hungary’s entry for the 2015 Best Foreign Language Film Academy Award. 107m. (Ray Pride)

“Son of Saul” opens Friday, January 29 at the Music Box in the director’s preferred format, 35mm; and in DCP at Renaissance Highland Park.