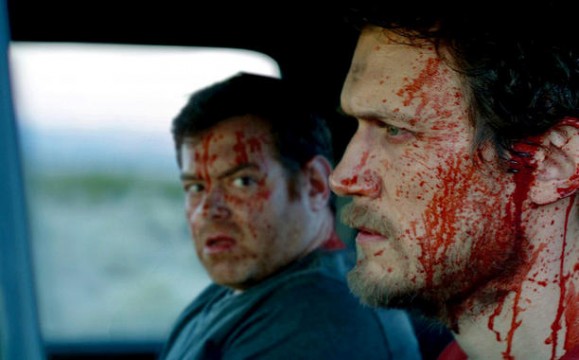 Portmanteau horror films are, formally, a practical expression of the modern means of no-budget film production: minimal, refined anecdotes that a director or team can do in a few days or weeks, and pragmatically, more economically remunerative than a standalone story. And creative risk, with lessened exposure, can result in bold work that can’t be sustained across the full duration of a feature. 2012’s “V/H/S”  was one of the first, and most commercially successful, as well as two “The ABCs of Death” anthologies. But it’s not all blood and roses: of the second “ABCs,” producer Ant Timpson told a reporter at the 2015 SxSW festival, “We got pirated before VOD, even. Before our world premiere. That’s the worst-case scenario. It really hurt us a lot, so we’ll have to crunch the numbers, talk to Magnolia Pictures, and see what’s going on.” Some of the same players repeat behind the camera for the very good, unusually cohesive “Southbound” deserves a finer fate than instantaneous financial immolation. For the five travelers-on-the-road tales, directors David Bruckner, Roxanne Benjamin, Patrick Horvath and film collective Radio Silence sup successfully at the spiked well of “Twilight Zone” and EC Comics-style nightmares. I’m very pleased I went into “Southbound” knowing nothing of what horrors will be unleashed on and around that dusty Mojave road. (The most chilling and best segment takes place at an abandoned hospital. The doings are cruel beauty.) It’s an eye-widening ride. Horror auteur Larry Fessenden provides narration in the form of a radio DJ. With Kate Beahan, Matt Bettinelli-Olpin, Susan Burke, Zoe Cooper, Gerald Downey. 89m. (Ray Pride)

“Southbound” opens Friday, February 5 at Siskel. Newcity film critic Ray Pride will conduct a  Skype Q&A with all the directors after the 815pm show, Monday, February 8.