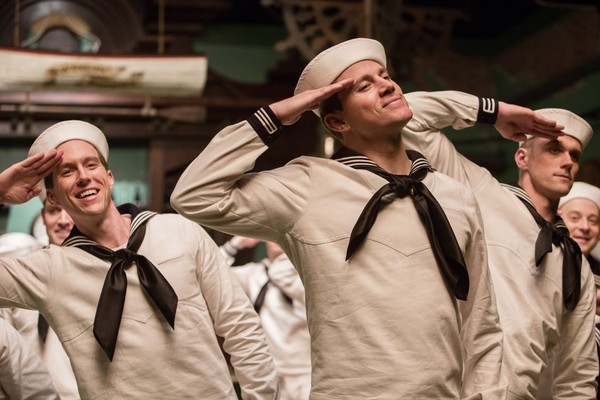 Not so much the stuff itself, more so the women I’ve known who partake and partake, and then watch and rewatch Coen brothers movies. It goes all the way back to, duh, “The Big Lebowski,” a movie that grated on me at first turn, at an advance Manhattan screening the night before interviewing the bros. Coen, where I was entirely sober and straitlaced and my tumultuously laughing, giggling, snorting then-girlfriend was baked within an inch of all her five feet tall. She got it and was gotten good, and explained afterward what I missed with increasing exasperation. It clicked the next day when most every entreaty I offered up to the writer-producer-directors was met with grins and giggles, a smokescreen entirely befitting that particular picture.

The latest Joel and Ethan Coen joint is “Hail, Caesar!,” superficially a satire of the entitled, juvenile doings behind the scenes at an apocryphal 1950s Hollywood studio, Capitol Pictures, modeled in matters small and large after the Melrose Avenue landscape of Paramount Pictures (and MGM, too). In a way, it’s like what might have been going on back at the studio while Preston Sturges’ “Sullivan’s Travels” film director was out on the road looking for so-serioso subject matter.

It’s a sleepless day and night and morning for Eddie Mannix (Josh Brolin in full simian complexity), the “head of physical production” of a full-tilt production slate with many moving parts and parts for all manner of Hollywood archetypes. While he has higher responsibilities, Mannix is patterned after a real-life tough nut, a fixer of the same name who worked for MGM. Being a Coen picture, their Mannix is soft at the core and better for it, yet one more of their Men Who Weren’t There, a man taken for a rustic and a rube, a Rosencrantz and a Guildenstern, who in fact makes the production schedules run on time. (There are also more than a few allusions to a little-known footnote to Hollywood history, a hardly chronicled figure who made the transition from paid-for fall guy to a particular crew position who could make his own fantastical non-satirical epic in another time and movie. I won’t divulge the name, but it’s more than apparent the Coens know the grand, bawdy tales of this figure, and maybe even met him before the end of his long life.)

The kidnapping of one Baird Whitlock (George Clooney at his Coenesque gooniest) from the set of “Hail, Caesar! A Tale Of The Christ” sets Mannix in motion. Whitlock has been abducted in full Roman garb by a crew of Malibu-meeting Communist screenwriters calling themselves “The Future.” “You’ve got a call from The Future” is one of the least eccentric lines in the spiky, sometimes sparkling script, which includes “It’s not really a dirndl,” Clooney’s character complaining of “300 miles of Frankish road” and an insert card during dailies that reads “Divine Presence To Be Shot.” The daily goings-on at the studio also allow the Coens to dip into scenes that are being confabulated in multiple genres of past eras, including Scarlett Johansson in a choreographed mermaid musical, the sorrows of a singing cowboy and a drawing-room drama cast with inappropriately ungenteel actors.

Odd arcana crunches underfoot in most every scene. Tilda Swinton turns up as twin gossips, Thora and Thessaly Thacker, Hedda Hopper and Louella Parsons as if they were born sisters like Dear Abby and Ann Landers, demarcated by swooping, stabbing aerodynamic hats. At a Chinese restaurant much like West Hollywood’s Formosa Café (a couple miles east of the Paramount lot), a scout for Lockheed hopes to summon Mannix into the future, which sounds much like a Thomas Pynchon novel or two to come, where he’d leave the “circus” of the studio’s fixing and human interaction behind for a “ten-year contract.” Historically suggestive proper names clatter without referents: Hogarth, Van Vechten. The Coens like the sound of mid-century surnames, that’s all.

There’s also a colorful snippet of a scene that goes to great and subterranean pains to link the lineage of “Hail, Caesar!” to unmade movies like “Hey Hey In The Hayloft,” one of the prior travails of the director in “Sullivan’s Travels.” In a darkened edit suite, Frances McDormand is the studio’s editing fixer C. C. Calhoun, coils of cigarette smoke and curls of hair and ringlets of 35mm film stock installed behind a Moviola, showing Mannix a scene that could reveal whether an extra might have been one of the men who kidnapped Whitlock. As they watch, the machine starts to strangle C. C., who disengages herself from near-death with a tossed off “I shouldn’t wear scarves.” The indelible allusion: Preston Sturges’ prestidigitation of a childhood across cosmopolitan reaches of several continents came from his mother, who was assistant-cum-amanuensis to legendary dancer Isadora Duncan, whom she gifted with a huge silk scarf that strangled Duncan when it became tangled in the spokes of her convertible roadster. If the Coens embed their japery that deeply, there’s more to divine from this seemingly superficial, largely pop-poppy confection than the “On The Town”-inspired Channing Tatum-featuring tap-dance musical number.

Unlike, say, “Inside Llewyn Davis,” after only twenty-four hours, I haven’t a clue how much “Hail, Caesar!” will hang within the epic Coen filmography, but something tells me the furrowed brow of Josh Brolin’s Eddie Mannix is going to stick with me, weed or no weed.