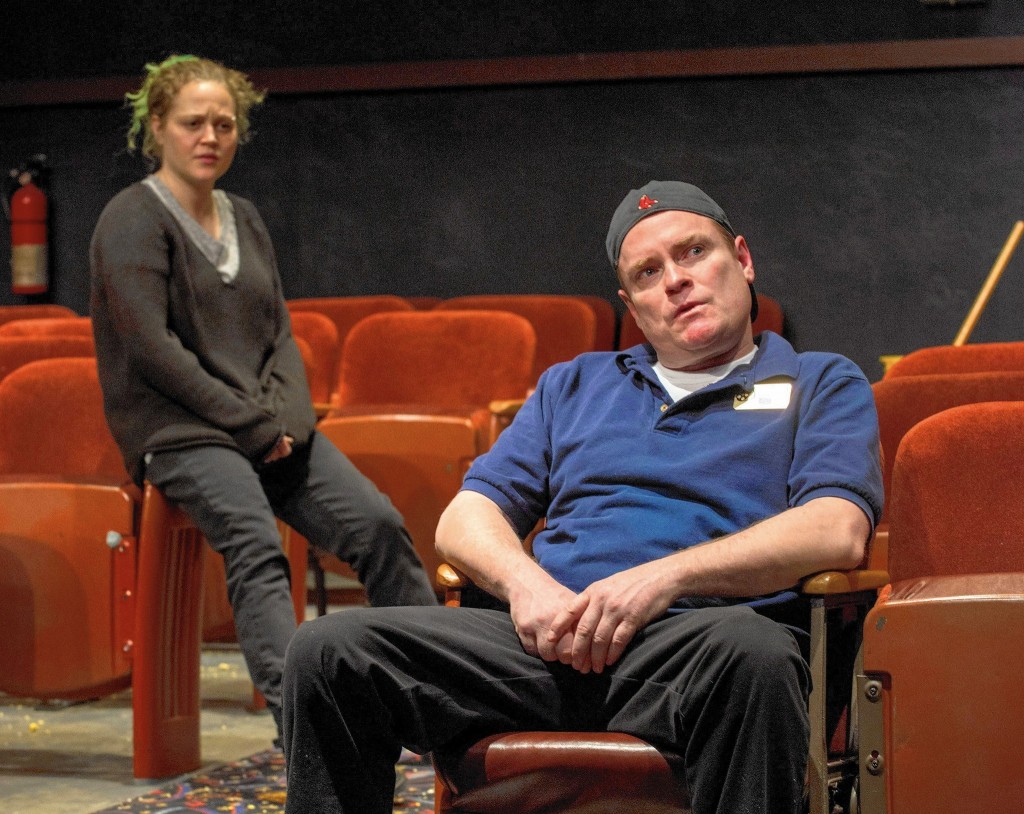 “Flicks” is an ugly word, but “The Flick” is a lovely play.

The Newcity film section style sheet has four or five stylistic oddities. “Flicks” is roundly prohibited. “Fucks” is how the longtime body type of the paper, Meta, renders those letters. Another is just how homely and condescending a word it is, how demeaning it sounds. The superior-sounding name of Gene Siskel’s column of capsules at the end of his career was “Siskel’s Flicks Picks.” So awful. “Film.” “Movies.” Even “flickers” sounds better! But as the name of a struggling, Worcester, Massachusetts (population 182,000) cinema, it’s got a ring in Annie Baker’s Pulitzer-winning play, as the last local theater, one of the last in the region, makes a last stand against digital projection sometime in 2012.

The Steppenwolf set is a down-at-the-heels 140-seat set, directly facing the actual seats inside the black box space. The trio of employees includes a man and a woman who’ve worked together for months, and a new, younger employee whose movie love ranges from “old Jim Carrey movies [to] the complete Criterion Collection.” Their bristling camaraderie born of shared drudgery allows them to expand on dollar-house dreams at an alienating job in an alienated culture as a century of celluloid gives way to digital projection. (The brand name of the projector is, notably, “Century.”) It’s a different era than when I worked just out of college at Evanston’s Varsity and Lakeview’s Parkway Theatre, but the rhythms (and even many of the anecdotes) ring true down the years into the present moment.

There are larger symbols, the auditorium a purgatory, sure, and the projection booth as a choir loft or heaven of sorts with its earthly angel and her coils of curls of blonde and suddenly spoken truths: “I totally have a drinking problem.” She also confesses, slouching in a despondent moment, “I can’t stay attracted to someone for more than four months.” The banter is straightforward but piercing. One of the male employees confesses, “I’m in love with you, I don’t know why, I see all these things that are wrong with you.” She squinches her features, thinks, asks: “Is it the kind of thing where you want the person to love you back, or secretly, you don’t want them to love you back?” “Good question,” he says, still unable to look her in the face. In these moments, there’s some of the bittersweet savor of “The Last Picture Show,” sharing the ruefulness of Bogdanovich’s film.

Like the movement in movies around the world sometimes called “slow cinema,” Dexter Bullard’s finely observed, precisely paced direction of “The Flick” works from duration rather than tedium. Across its three-hour-plus running time the tempo isn’t slow, but deliberate. While world filmmakers like Iran’s Abbas Kiarostami, Hungary’s Béla Tarr, Mexico’s Carlos Reygadas and Romania’s Cristi Puiu have been taxonomized as practitioners of “slow cinema,” one of the most appropriate examples is from Taiwanese director Tsai Ming-liang’s 2003 “Good Bye, Dragon Inn,” which takes place largely on a closing night showing of an action film, “Dragon Inn,” in a ramshackle theater on a night full of rain, populated by the projectionist, a few patrons and even a couple of ghosts from the movie’s era. An hour in, there’s a shot of about six minutes that matches the perspective we have on The Flick’s auditorium, and one of the ushers moves through, gathering trash, slamming seats into an upright position. There’s a gentler version of this at the end of “The Flick,” in which one of the ushers does a little sidestep of a soccer kick and a seat at the back of the theater pops upright. Intentional or not, the small gesture in echo with Tsai’s great elegy is one among many, the small bits of poetry in the staging of Baker’s play. Particularly striking is the dismantling of the Century projector, seen from the auditorium, and the glide-in of the flat, featureless new digital projector, a caisson rolled into place, the flickering white beam of 35mm replaced with a post-“2001: A Space Odyssey” blue dot of light in abrupt darkness, accompanied by a brief, dull hum. There’s no detail on page or in space I’d nitpick, even two tiny efficiencies: feature films being shown on a single projector, rather than two; movies fitting into a single, octagonal metal tin rather than two.

And there was another movie-movie moment during that preview. At the intermission, exiting to the lobby, voices there were raised in unusually vivid chorus, different pitches, registers, almost like we were walking out into an a cappella number in a Jacques Demy musical: “Scalia! Scalia? Scalia-Scalia! Scalia is dead! Scalia is dead? Can it? Is it? Scalia! Scalia is dead!” Voices raised, rosy cheeks in bloom, shock, surprise, a moment of larger life in parallel with live theater. The rush of history sped the second act of “The Flick” to its bittersweet but still comical end. (Ray Pride)

“The Flick” runs through May 8. Details here.