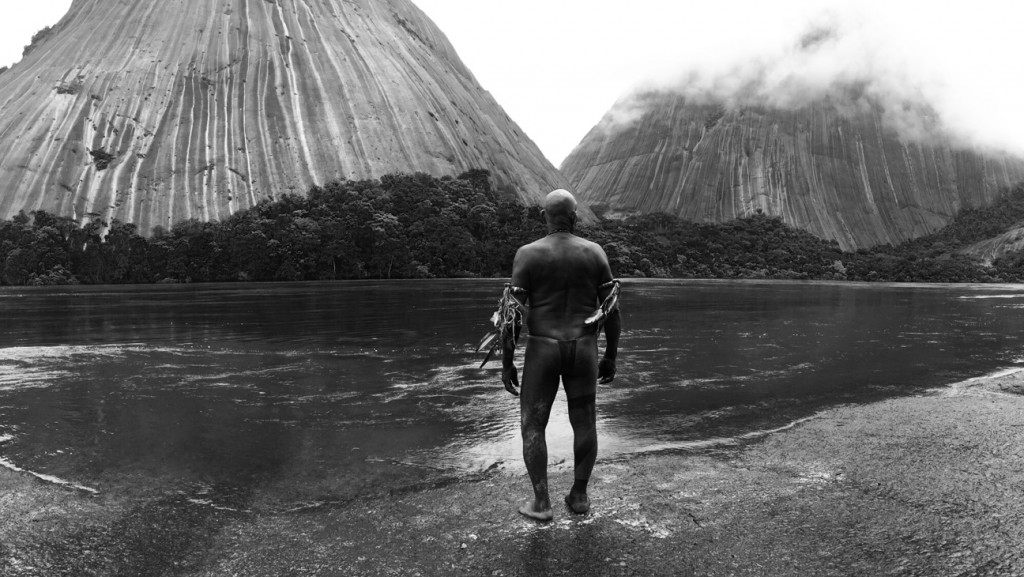 Ciro Guerra’s hypnotic twentieth-century-set “Embrace of the Serpent” (El abrazo de la serpiente), is an otherworldly innerworldly trip, a serenely strange vision of black-and-white iridescence, a journey, at first, toward healing, but also toward foreseeable predations of colonialism. Lessons lie low as the confident illogic of raging visions takes hold. Drawing on the journals of Theodor Koch-Grunberg and Richard Evans Schultes, explorers of the Colombian Amazon, “Embrace” begins in 1907 with the German Koch-Grunberg (Jan Bijvoet) in search of a rare, mysterious flower, the sacred plant yakruna, that he believes can cure him. They meet Karamakate (the Cohiuanon tribesman Nilbio Torres), an Amazonian shaman who believes he is the last of his kind. A second narrative, set in 1940 after the incursion of predatory rubber barons, is interleaved, taking the older Karamakate (Antonio Bolívar) on another, darker journey, with another explorer, Evan (Brionne Davis), in quest of the elusive yakruna. Both quests move deeply, darkly toward hearts of darkness. Guerra’s lyrical, direct third feature pulses with Herzogian ambition, as demonstrated in movies like “Fitzcarraldo” and “Aguirre, The Wrath of God,” as well as toward more hallucinatory meet-the-indigenous narratives, including Jim Jarmusch’s dream of the walking dead, “Dead Man,” and in its more emphatic, expressionistic bursts, the pungent work of Alejandro Jodorowsky. The sublime, silvery Super 35 images, as well as the setting, also evoke the body of work of the great Brazilian documentary photographer Sebastião Salgado. Guerra’s silken surfaces and sudden eruptions seduce the eye and ear in equal measure. (Ray Pride)

“Embrace of the Serpent” opens March 11 at the Music Box.