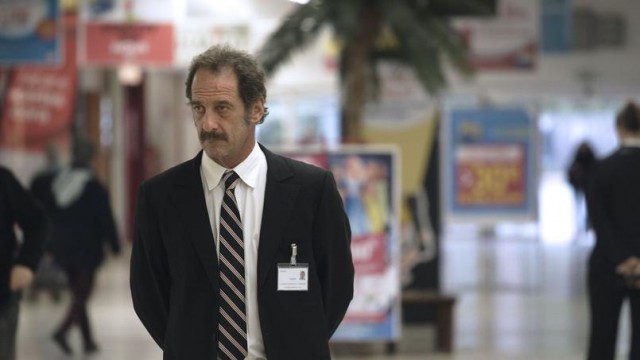 French film stalwart Vincent Lindon offers one of his most engaging performances in memory in the muted drama “Measure of a Man,” as Thierry, an unemployed working-class husband and father of a mentally challenged teenager, who returns to the workplace after nearly two years of unemployment. (The French title of “La loi du marché,” translates roughly to “The Law of the Market.”) The close-in, largely handheld hyper-vérité camerawork is in our face as well as Thierry’s, but director Stéphane Brizé (“Mademoiselle Chambon”) doggedly stays with the hangdog Lindon through thin and thin. Bureaucracy bites at the decent man, job interviews chew him through. Frustration rests upon frustration. Thierry means to persevere, but melancholy rests on his shoulders almost as weightily as the droop of his mustache. There are passages of joy, glimmers of hope and the terrifying, ill-defined laws of the market. Soulful simmering like “The Measure of a Man” does at least demonstrate that the angry, insurgent work of the Dardennes or Mike Leigh does put modest (if not meek) social-issue filmmaking in the shade. The end scene of the Dardennes’ “Rosetta”? Could’ve used some of that here. 93m. (Ray Pride)

“The Measure of a Man” opens Friday, April 22 at Siskel.