After five years on Comedy Central, comedians Keegan-Michael Key and Jordan Peele make a leap to the widescreen with “Keanu,” an action comedy that pits two cousins against drug-dealing gangsters after the loss of a beloved gray tabby named, yes, “Keanu.” The tabby battles for cutest feline honors ever in a swear-filled, R-rated tribute to 1980s-nineties movies like “Midnight Run.” We caught up with the team one recent morning at Bucktown’s Tree House Humane Society, but sadly, sans kittens.

Do you know the collective noun for cats?
Key: No!

Feral cats, it’s a destruction of feral cats.
Key: Okay, that just overtook a murder of crows. Murder of crows was always the best one. A destruction! What’s a pod? Whales? No, that’s a herd. A pod. A pod of dolphins! And an army of frogs.

Peele: Who comes up with these? Who gets to do that?

I think it should be a puddle of kittens.
Peele: That would be good.

Peele: We just made one up!

How did this cat become a fluffy superhero?
Peele: Jordan, you and [co-writer] Alex [Rubens] started this three years ago?

Key: Yeah, which is pretty new in Hollywood terms. But the kitten is symbolic of our relationship in the movie, Keegan and my character are cousins. It’s the heart of the story. It’s the McGuffin. But I think the thing that grounds this heightened situation, we talk about this idea that this is fish out of water, guys electing to put themselves in harm’s way. The first draft of the script that we did, didn’t have the kitten in it.

Aw!
Peele: See! That’s how compelling the idea is!

Key: Interestingly enough, that first draft, it didn’t feel realistic enough, why are these guys—we needed the why. Everybody can relate to the idea that you’d do anything for your animal. Family is the heart of this movie, and Keanu, the kitten, is definitely going to sell more tickets in Japan than Key and Peele.

You’re tempting the most retrograde thing, an adorable animal in peril. But you don’t really threaten Keanu, do you?
Key: No, he’s Helen of Troy. The kitten is Helen of Troy! There were drafts of the script where you’d see, it’d say three or four times in the script, “Remember, this is the most adorable kitten that’s ever lived, and everyone is immediately enamored.” The cat is a tractor beam, so it becomes the thing that everyone fights over. We’re the Athenians, we’re the Greeks, and Cheddar and his gang are Trojans, I guess.

Peele: Tonally, too, we thought about it. Do you have somebody hold a gun up to a kitten? The answer is no.

There’s a 1990s New Line Cinema feel and that’s the label the film was produced under.|
Peele: Certainly, the nineties thing. The movies that really inspired this are “True Romance,” “Thelma & Louise,” “New Jack City,” “Raising Arizona,” some “¡Three Amigos!”

Key: That’s the stew. And with a soupçon of Marty Brest.

Key: A soupçon, just a dash, a skotch. In that world of “Midnight Run” and “Beverly Hills Cop,” we get this sense of it being terribly hysterical, yet the bullets are real. We wanted it to be grounded, which is what we did in our sketch show, the kind of rule of thumb was, always be as grounded as you can at the top, so that the genre is deadly accurate as it can be and the acting is deadly accurate as can be and then we can heighten from there however we want. So that nineties esthetic is extremely important. 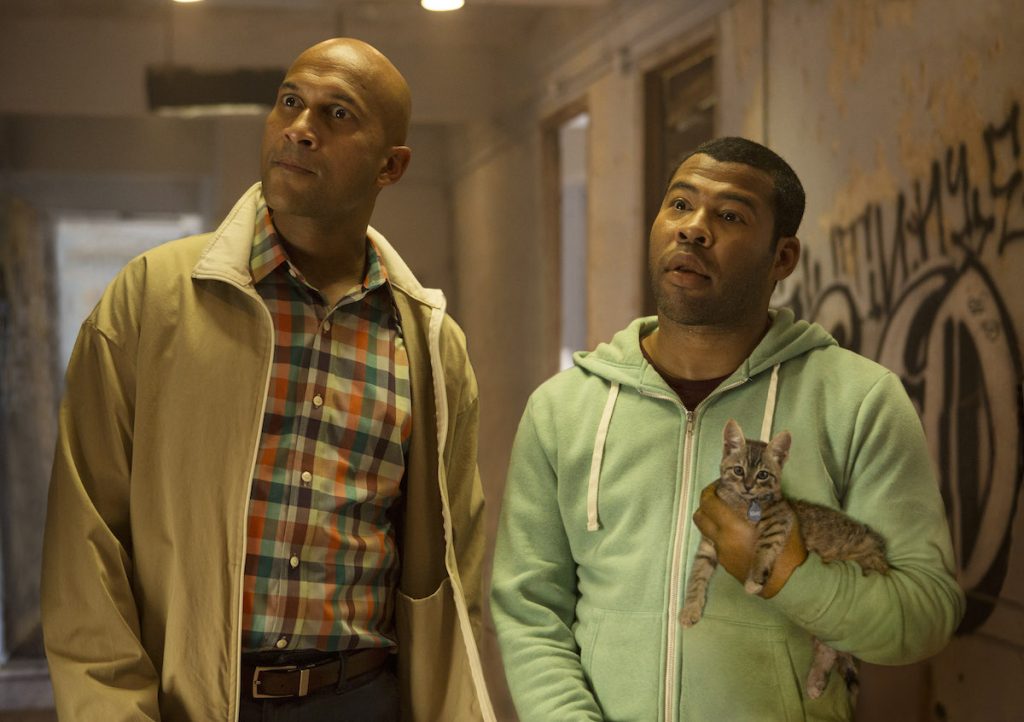 Peele: And that’s kind of the golden era of films with movie stars…

Peele: Action comedies from that era, they had their independent edge but they also had money.

Keanu leaves an indelible mark, but there are stretches we’re just with your characters in extended setpieces. How did you think about the difference between sketch comedy and a feature film?
Key: We knew pretty early that anything with a kitten in it is gold. There is a section in the movie where we’re putting the audience through what the characters are being put through, and there’s this sense, we gotta get Keanu. This cat is that driving force.

Peele: I think in the sequel, there’s going to be even more kitten.

The cat’s real, but how many were there?
Key: Seven cats. Yes. You can’t start training cats until they’re nine weeks old. The trainers are very astute and attuned to the animals: which kitten can we use that travels from point A to point B, which is the kitten that you can hold and it won’t fidget, and which kitten is the one that does exactly this. They watch their personalities as they grow and they train them in different directions. So we used three, they started bringing up the next four, there was a day we went to a cat cage and we pulled out the cat, nope, we can’t use him! It had a growth spurt overnight. Definitely a team effort.

Why was this a good jump from the years of doing a series?
Peele: This movie was presuming that we had to introduce ourselves. I don’t think of it so much as a jumping-off from the show as if, we had to sum up to an audience, everything that we’ve developed as comedians. If we had to give someone a crash course in what we do and do it on a big screen, this would be it.

But it has to stand on its own. This has to be its own animal.
Key: Riiight. Keanu certainly has the best approval ratings of the top three actors in the film. He’s working at a very healthy eighty-seven percent right now.

Peele: Kudos to us for competing with a kitten.

Key: That we’re even in the running!

When in doubt, cut to the close-up, no, the extreme close-up!
Key: Yes! I want to see those dewy eyes!