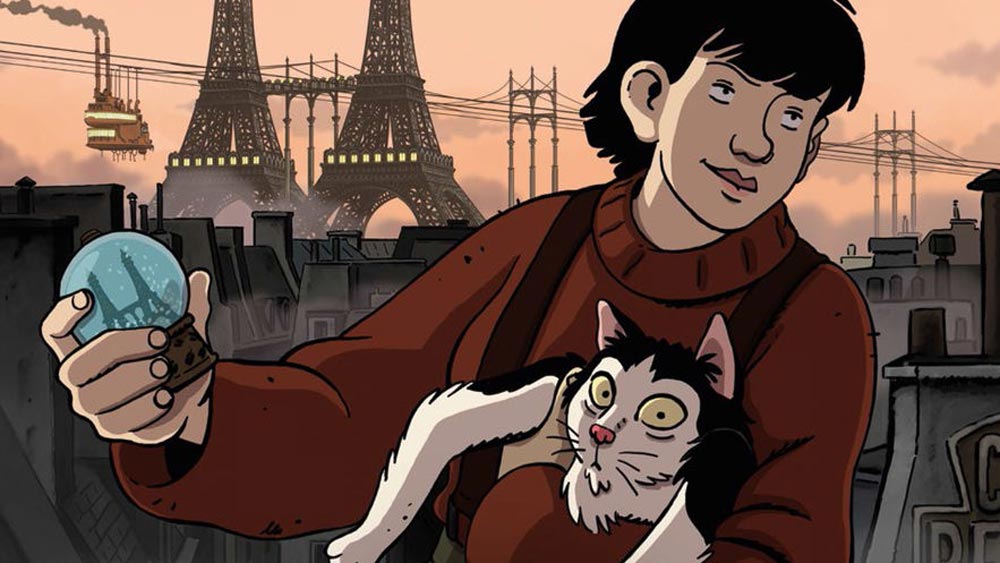 A question to which I immediately say yes, yes: Smart, clever, ceaselessly dazzling steampunk, drawn entirely from French visual sources, about a family of scientists obsessed with longevity who dash about an alternate-universe Paris, where the Industrial Revolution never happened, where progress stopped when most of the scientists disappeared at the turn of the century and where everything is fueled by coal and steam, with no electricity to light the land?

Christian Desmares and Franck Ekinci’s grand and dazzling, wonderfully weird “April and the Extraordinary World” (Avril et le monde truqué), a packed, swarming eyeful of imaginative goodness and foolishness and hand-hewn line drawing, is also an answer to, “What the fuck are all those U.S.-produced animated films about? Is there any potential for animation as an art form?” Of course there is, but, coming from famed graphic novelist Jacques Tardi and the producers of “Persepolis,” “April” bursts with bleak invention, including battles that would be nearly impossible to stage (or finance) in live action. There’s also a memorable talking cat named “Darwin” and I never would have predicted I’d be a sucker for the apparition of cyborg rat spies. With the voices of Marion Cotillard, Jean Rochefort, Philippe Katerine, Olivier Gourmet, Marc-Andre Grondin, Bouli Lanners. 105m. (Ray Pride)

“April and the Extraordinary World” plays May 6-19 at Siskel.