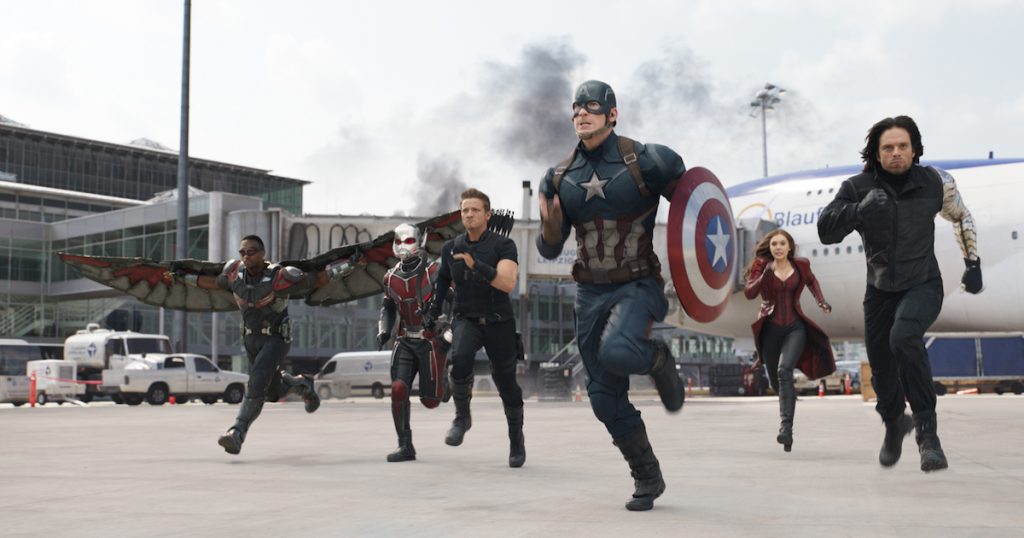 “Everyone’s got a gimmick now!” one of the phalanx of superheroes rightly remarks in the middle of “Captain America: Civil War.” And hell-o, Tom Holland, Spider-Man the third! With 147 minutes of call-and-response among eleven characters, and despite the affable dispatch of the second “CA” movie directed by Joe and Anthony Russo, the debut of the newest lamb relatively late in the picture (not lessened by the introduction of a new Aunt May, Marisa Tomei) was the first passage where I found myself chortling aloud. Paul Rudd’s Ant-Man turn is also a small delight from a different place, but the international-terminal bustle of characters passing and flying and crashing and blasting through, and ultimately battling to no good end on a Leipzig tarmac, wears even in the Russos’ proficient grasp. As does Robert Downey, Jr., jostling tones of weariness and betrayal with the irritated delivery of near-nonsensical non-sequiturs. For anyone who suffered through the lead-bar-in-motor-oil self-importance of Zack Snyder’s DC dreadnought, “Batman v Superman,” the use of daylight, comprehensible blocking and coherent action editing is a relief, as is the realization that “CA: CW” covers much of the same ground: what responsibility do those with power have to those who are killed as collateral damage, what responsibility is there to respect sovereign nations in a world bristling with terror threats? The Russos and credited screenwriters Christopher Markus and Stephen McFeely establish stakes with only as much self-seriousness that is necessary when differentiating a raft of “enhanced individuals” like the Avengers, and it’s a far cry from the grim, feigned gravitas of the Snyderverse. For those who relish the sprawl of the Marvel Comics universe, “Civil War” should be even more of a delight. There’s no Thor or Loki or Hulk or Bruce Banner, so the other Avengers, Captain America/Steve Rogers (Chris Evans), Iron Man/Tony Stark (Downey), Falcon/Sam Wilson (Anthony Mackie), Ant-Man/Scott Lang (Paul Rudd), Hawkeye/Clint Barton (Jeremy Renner), Scarlet Witch/Wanda Maximoff (Elizabeth Olsen), Vision (Paul Bettany), T’Challa/Black Panther (Chadwick Boseman), James Rhodes/War Machine (Don Cheadle), Natasha Romanova/Black Widow (Scarlett Johansson) and Winter Soldier/Bucky Barnes (Sebastian Stan) will have to satisfy. With Daniel Brühl, William Hurt, Martin Freeman, John Slattery, an uncredited Hope Davis and, in a single searing scene, Alfre Woodard. Widescreen. Reviewed in IMAX 3D. 147m. (Ray Pride)