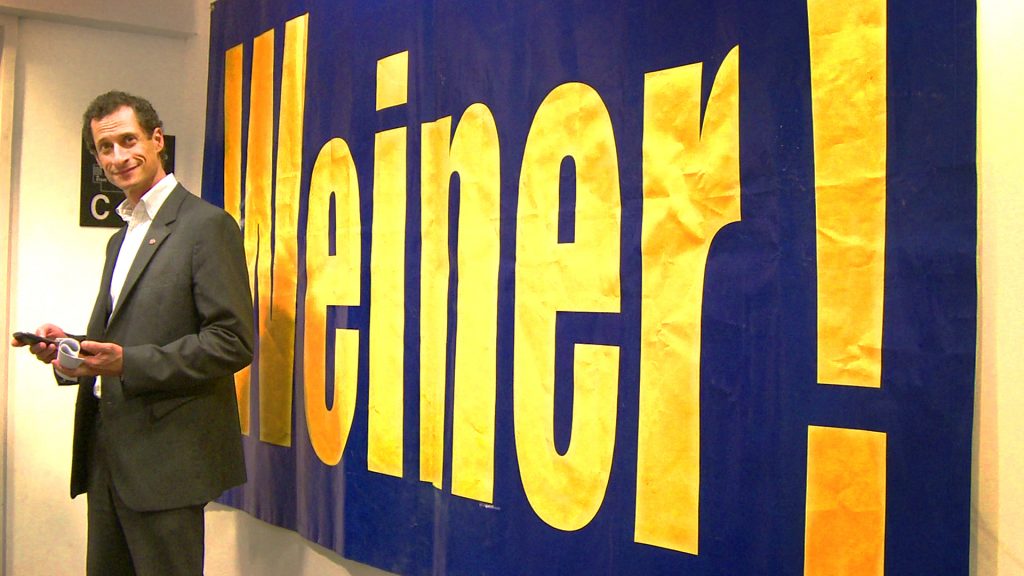 Josh Kriegman and Elyse Steinberg’s nonfiction politico-horror-comedy “Weiner” begins with a quote ascribed to Marshall McLuhan: “The name of a man is a numbing blow from which he never recovers.” Followed by a jauntily scored credit sequence playing over former New York Congressman Anthony Weiner’s hot-tempered defense of 9/11 first responders, we’re positioned to take the man who brought himself down, twice, in nonsexual-sexual texting humiliation under the nom de spume of “Carlos Danger” as downright comedy of mortification. “Weiner” is that and more, a terrifying display of hubris and failure, and pain that is spread all around, from his loyal, beleaguered staff to his wife, Huma Abedin, known as Hillary Clinton’s right hand for many years. The proximity and intimacy outstrips average reality TV by miles. Shortly after his opening line, “Shit,” Weiner says to the camera, “I guess the punchline about me is true, I did the things, but I did a lot of other things too.” The tragic element begins quickly as he’s badgered on morality by CNN’s elder empty suit Wolf Blitzer: “You would know if that was your underpants.” (Bonus footage: Donald Trump video-blogging “We don’t want perverts elected in New York City, no perverts.”) Kriegman worked for Weiner during his first mayoral run in 2005 and later became his New York chief of staff. When he heard that Weiner was running again in 2013, he approached Weiner, who, you’d presume, hoped for a portrait of redemption in some form or another. By this portrait, he’s an image-obsessed, phone-fixated, emotionally masochistic man whose stirring politic instincts and genuine fits of charisma are undercut by a tendency to verbalize his every motivation, often to reporters, not just the camera, and then to slough off his statements by saying, “No, I was just talking words.” But the snips of media we see are just as daffy, with one talking head saying, “The heart has its reasons of which the heart knows nothing,” citing Blaise Pascal, which is discounted by someone else with words for Abedin, drawn from Macbeth, “Has she eaten on the insane root that devours intellect?” It’s a smaller canvas than Shakespeare’s, yet one of the most appalling, fascinating, compelling portraits of a modern politician. A high point among so many, flawed only by a small cut, is in the Weiner-Abedin kitchen one morning, when Abedin is asked how she’s doing. She pauses, there’s a cut, she says flatly, “It’s like living in a nightmare.” She smiles, all poise and resolve and red lipstick and white teeth and hightails it out of the frame. Second only to that is Weiner turning to his interrogators in the back of his car, “Isn’t the fly-on-the-wall technique, doesn’t that have a little to do with the notion of not being seen or heard, you just kind of pick up what goes on around you?” Why would anyone offer this much intimate access at work, in the car, at home? Would anyone ever do it again? (You can guess why; of course.) 100m. (Ray Pride)

“Weiner” opens Friday, May 27 at the Music Box.