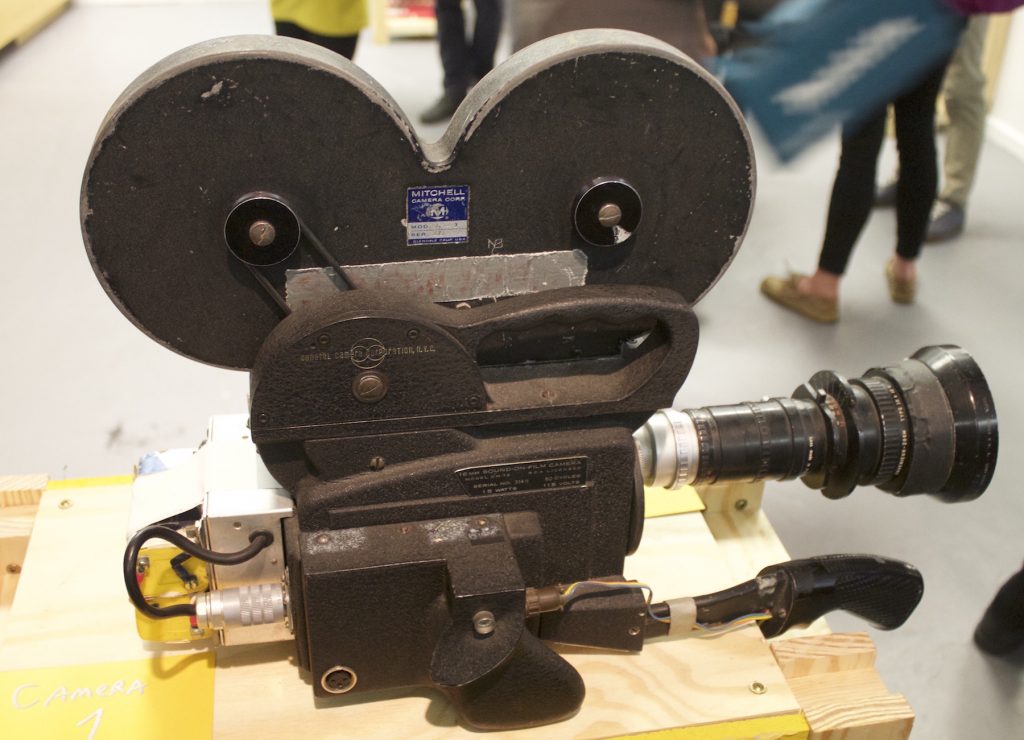 There are facts and figures for days and decades about the fifty-year history of Chicago’s unique, not-for-profit social justice documentary collective, Kartemquin. There’s an edifice, too, a modest, unassuming, even threadbare seventeen-room, three-bathroom, one-scary-basement (with dirt floors that may have been used by bootleggers) building on Wellington Street, bought in 1971 for $21,500. Five edit bays are in steady service, inching toward the finish line for fourteen works in progress. (Two releases are expected later this year, including the rapturously reviewed “Raising Bertie,” and a potential eight releases in 2017.) There are layers of snapshots and reminders on the refrigerator, and there’s stuff everywhere: an Emmy here, an Emmy there, a Peabody, another Directors Guild award. Sculptures sleek and dumpy from around the world of film. (No Oscars, though: that’s a historical omission that hasn’t changed since the oversight of “Hoop Dreams” in 1994, which elicited howls from many, perhaps the loudest from Roger Ebert.) While core members from its 1960s inception and idealistic origins remain attached in one form or another, the group works with a staff of fourteen, producing almost fifty new program alumni each year, and with a network of associated filmmakers and core alumni that could number as many as seventy-five active participants.

The Kartemquin filmography is pegged at fifty-five, a number that Tim Horsburgh, Kartemquin’s director of communications and distribution since 2009, finds “iffy, for a multitude of reasons. But that’s the current canonical number. There were several years without any releases, especially in the 1980s and 1990s. During that era, they supported themselves with industrial work-for-hire projects that also aren’t part of our official canon.” (Over half of Kartemquin’s films have been produced since 2000.) 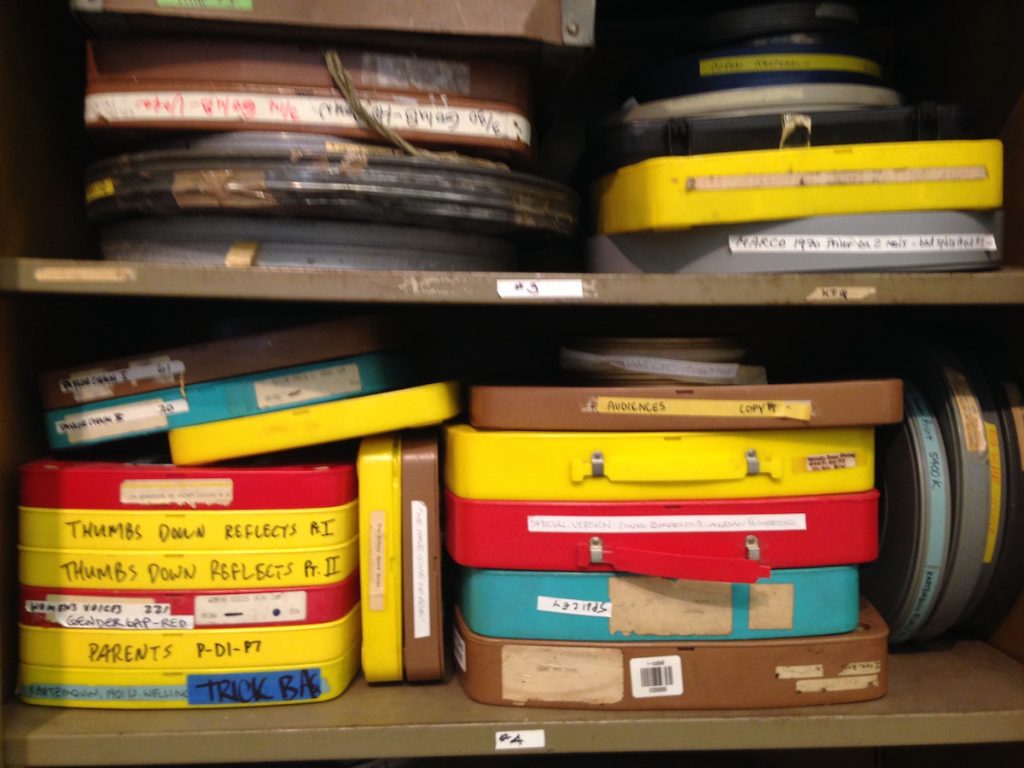 The group’s goals have gone beyond production of a succession of nonfiction films, but the exhibit running through August at the city of Chicago’s Expo 72 exhibition space on Randolph, “Kartemquin Films 1966-2016: Democracy Through Documentary,” is a packrat’s daydream of evidence of what it took to make independent movies in the past half-century, from key documents to “Camera 1,” the rough, custom-crafted camera that shot the earliest Kartemquin endeavors. There are many more moving parts to the celebration, including retrospectives, screenings, free online streaming of every Kartemquin film, one each week, monthly WTTW programs, as well as a wealth of workshops, panels and master classes. The memorabilia show is the most visible and will have additional artifacts moving in and out throughout its run.

Horsburgh personally found a range of artifacts on show as meaningful. “I was really pleased we got [late co-founder] Jerry’s [Blumenthal]’s desk and the yellow cabinet of actual film prints in there, and the Sandinista letter [thanking the group in 1981 for a gift of an Auricon 16mm camera] and the random boxes of files and tapes… They’re all parts of Kartemquin that are actually part of the usual furniture of 1901 West Wellington.” 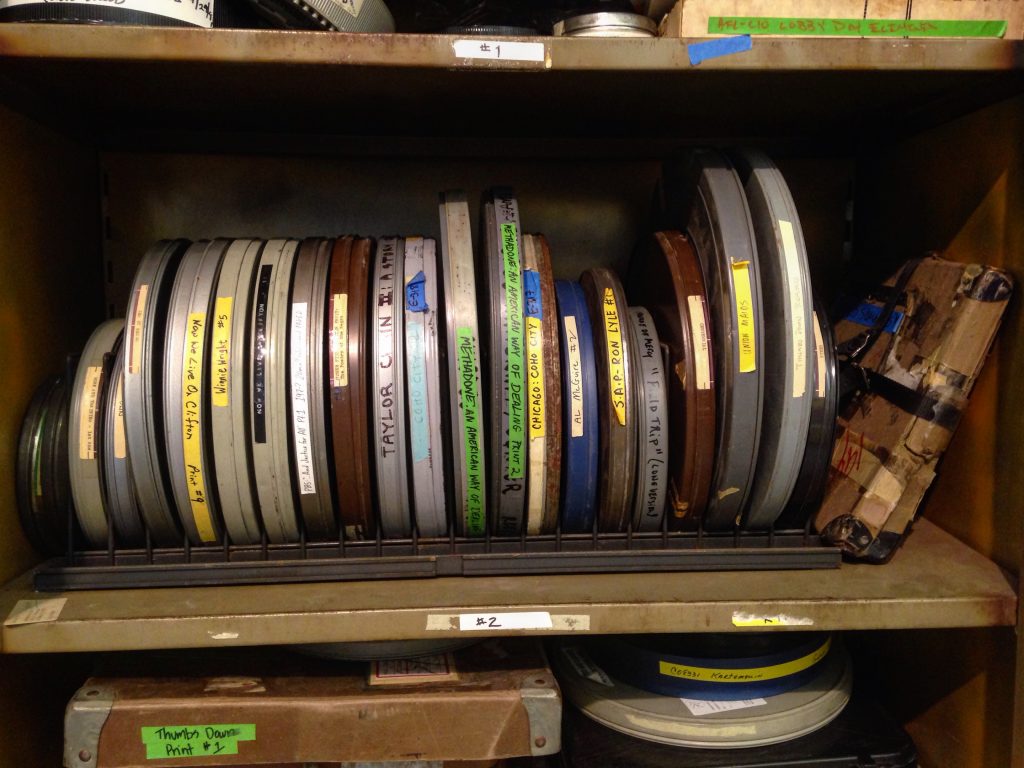 You’re sharing your mold with the masses?

“Yes,” Horsburgh says, “But I think one of the coolest things is that people can look at those original founding documents of cinematic social inquiry, and the two original (unsuccessful) fundraising proposals for ‘Hoop Dreams,’ one from around 1986 or eighty-seven, and the other around 1990, when the length had gone from one hour to three hours, and you can see how much more the filmmakers understand the story they have been capturing, and so people can see that process of forming a film over multiple years, how perilous and uncertain it is. We hope people will go through and be amazed and, we hope, inspired that [any group] like this has survived for so long without compromising on ideals or on quality.”

And those three blue metal tins at the entrance of the exhibit marked “Hoop Dreams” contain an actual, complete 35mm print?

There’s engrossing documentation of all kinds as well, including a recurrent, brief quotation that co-founder and artistic director Gordon Quinn has favored from the first glimmer to explain the enterprise, from pragmatist philosopher John Dewey: “Artists have always been the real purveyors of the news, for it is not the outward happening in itself which is new, but the kindling by it of emotion, perception and appreciation.” There’s also a page of minutes written into a spiral notebook in red ballpoint, with the frank notation: WE ARE OVERDRAWN. 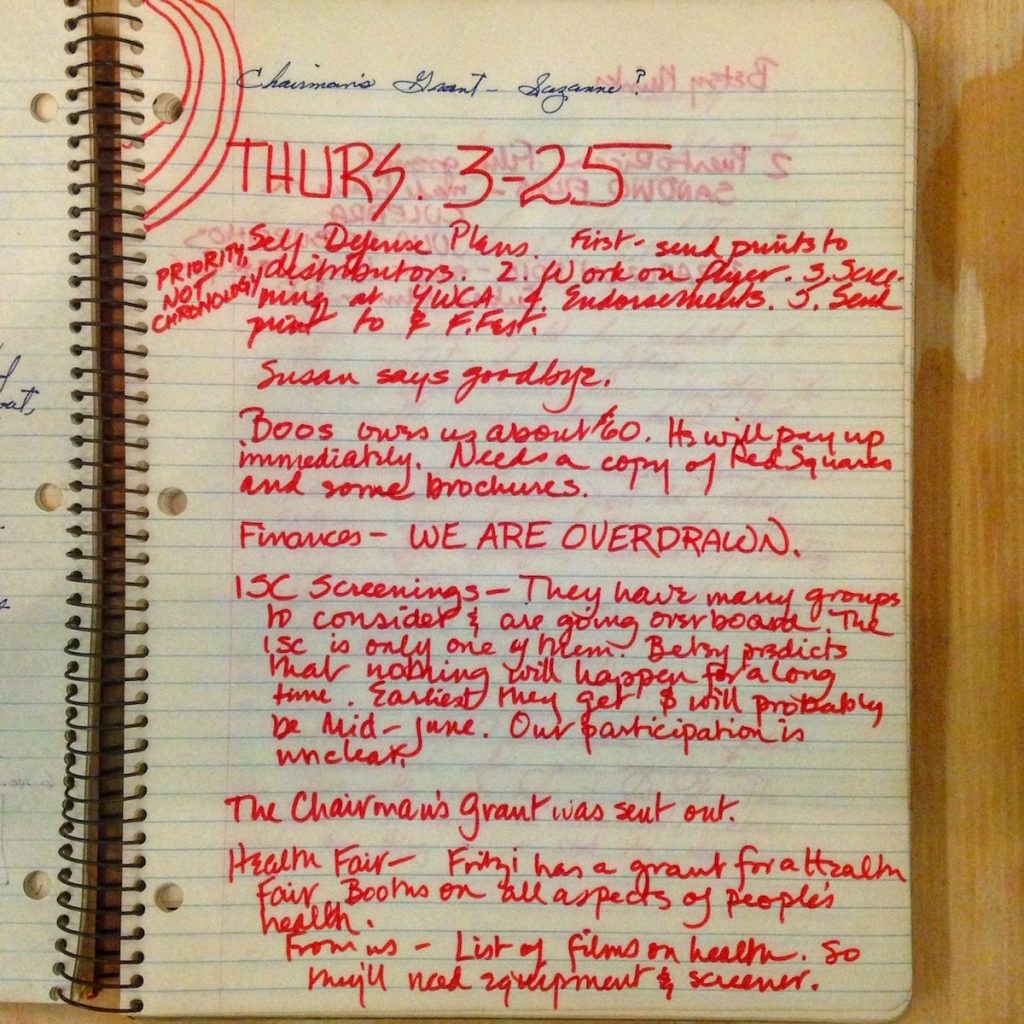 On a drowsy weekday afternoon at the Kartemquin compound, I asked Quinn, the seventy-three-year-old all-round keeper of the mission, about how the past and the prospective future reflect each other. Known for documentaries that build on longitudinal shooting periods and often, distinctively extended editing schedules to find an ideal form, Kartemquin would also like to make shorter work. “We’ve been talking about making short films here for years and haven’t really been doing it! It’s tricky,” Quinn says, beginning a digressive but comprehensive answer. “One of the things that can happen, from this fiftieth anniversary, what you want from an anniversary is not a dwelling on the past, but figuring out what propels you into the future. I think we’re at a pretty confusing time in terms of where things are going. When we were a collective and it was the late sixties, the seventies, we all thought we all knew where we were going, we were going to make revolutionary change, we were going to change the world. There was a real thrust into the future. But that hasn’t always been the case in terms of the period we were making films in.” 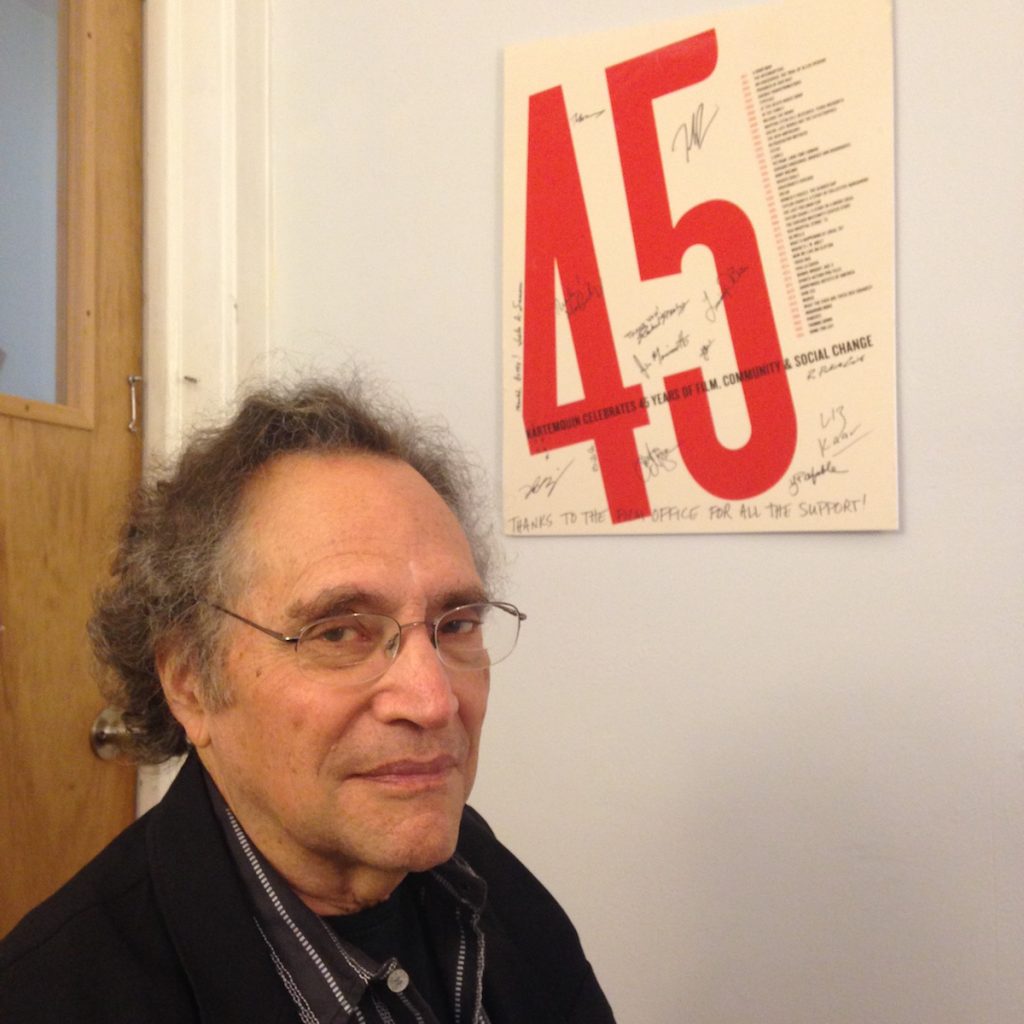 “Hoop Dreams” was the collective’s most important turning point.

“When we were making ‘Hoop Dreams,’ we were totally committed to it,” Quinn says, crossing his legs and revealing his customary white socks. “We had very little luck raising money for it. [St. Paul PBS affiliate] KTCA got involved, but basically, most of it was done with donated labor and people working on other projects while the film was being made. It was tough, and I don’t think we saw at the time the tremendous impact that that film was going to have, it would change our thinking about where we fit in, and what we should be doing. I think we’re at a period like that again. It’s not quite clear. Yes, we want to do shorter work, you want to do work that has that potential to be on the internet, but by the same token, you don’t just want to pander…

“One of my least favorite things,” Quinn continues, “[is] people saying, ‘we have to get kids to watch this, we’ll turn it into [the equivalent of a rap video].’ Wrong! ‘Hoop Dreams’ is not a rap song, it’s three hours long, and kids, especially when it came out, it held them. They were riveted. What we need to do with short work is something [resourceful], you really need to be thinking about what are new ways of telling a story, that doesn’t just recreate what’s already out there, or just going with what you think is popular, or sells.”

Betsy Steinberg, former head of the Illinois Film Office and Kartemquin executive director since December 2015, joins in the conversation. “One of the key aspects of Kartemquin today is the commitment to future filmmakers, including the programs that we’ve got going that are designed to  guide emerging filmmakers. One of the things that I learned about Gordon very early on was that his commitment to helping someone guide their craft, and that it remains their craft, is really important. He’s not trying to make a little army, a new generation of Gordon Quinns. He wants to communicate really important aspects of storytelling and form, that the voices be the most important part of the film. The programs that we’re doing are really about future and legacy, it’s influencing the next generation of filmmakers. What goes hand-in-hand with that is the commitment to public media and independent media.”

“It goes back to that early experience, and I say it now when I speak to groups of young filmmakers,” Quinn continues. “If you don’t see the space that you want to be in your field, fight for it, create it. Which is what we did. We battled for the creation of ITVS, Independent Television Service [which supports nonfiction work that is shown on PBS affiliates], the battle around fair use [which allows filmmakers to use sounds and images without paying exorbitant fees], the recent battle around the scheduling of POV and Independent Lens [programming strands that were almost shunted into the wee hours of the night by key stations], all of those things were saying to the world, there needs to be a space for a certain kind of work, and we, as the field, have to stand up, as a community. We used to be known for creating films, and I think more and more we are becoming known for creating filmmakers. For instance, when Usama Alshaibi came in and made [his personal essay film] ‘American Arab’ with us, he came out of an experimental background. First, I think because it was Kartemquin, when he was here, it was a much more vérité documentary, but I could see him pushing around the edges, trying to sneak these things in. It was like, y’know? Go with that! Go with what you think it really ought to be.”

“Kartemquin Films 1966-2016: Democracy Through Documentary” continues through August 20 at Expo 72, 72 East Randolph. The many fiftieth year events are listed at kartemquin.org. The official KTQ50 Birthday Party is June 24 at Harris Theater Rooftop (ktq50.org/party)