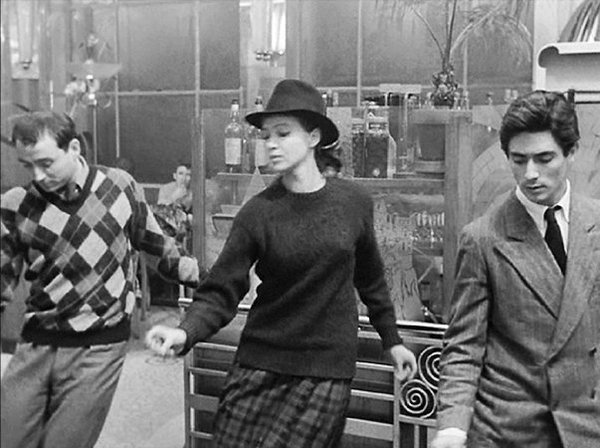 In the collection “Godard by Godard,” Jean-Luc Godard claims that “Pierrot le fou” was banned to those under eighteen for “intellectual and moral anarchy.” Godard’s fertile production in the years that “Band of Outsiders” (“Bande à part,” 1964) and “Pierrot le fou” (1965) were made partook of its own sort of anarchy, steeped in cash and casting. “What exactly was the starting point for ‘Pierrot le fou’?” poses a Cahiers du Cinéma interviewer in the same book. “A ‘Lolita’-style novel whose rights I had bought two years earlier. That was to have been made with Sylvie Vartan. She refused. Instead I made ‘Band of Outsiders.’ Then I tried to set the film up again with Anna Karina and Richard Burton. Burton, alas, had become too Hollywood. In the end the whole thing was changed by the casting of Anna [Karina] and [Jean-Paul] Belmondo. I thought about [Fritz Lang’s 1937 outlaw couple story] ‘You Only Live Once’; and instead of the ‘Lolita’…kind of couple, I wanted to tell the story of the last romantic couple.”

In the more than fifty years since this pair of movies were made, shown in new DCP digital restorations, there have been so many borrowings and homages and nods to the finished results of Godard’s provisional, haphazard, yet carefree production methods, it’s still important to realize how strange, obstinate, tender and lyrically strange these two movies were, juggled simultaneously in the mind of this Swiss kid. (Ray Pride)