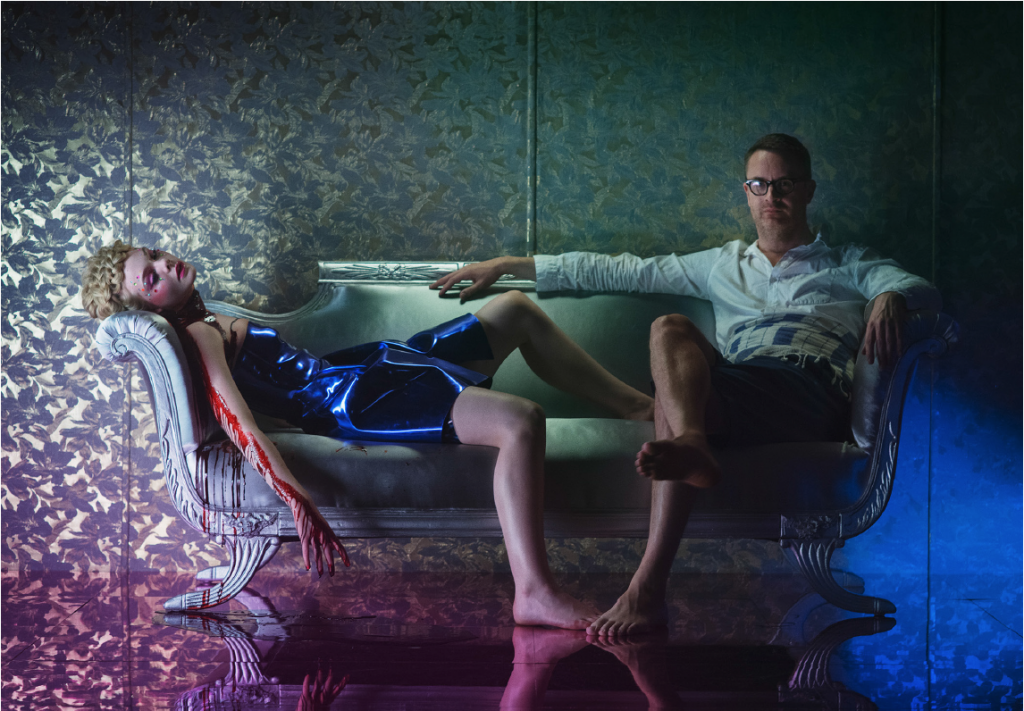 Nic Refn is on the phone ordering three hard-boiled eggs.

The forty-five-year-old Dane wears black leather slippers, sockless, black pants just so above the ankle, his customary interview white shirt, two buttons undone, thank you, a pair of ear buds, buds tossed over his shoulders and the plug forward to a missing device: the iPhone he’s emailing on. Elle Fanning sits on the couch beside the puckish provocateur in a simple black dress and clunky oversize pink-and-silver running shoes. Outside the hotel on the Gold Coast, the first day of summer, it’s almost one-hundred degrees.

His new movie, “The Neon Demon” is minimalism and maximalism, a languorous rush of images and wall of music hangered onto a fairytale of an underage girl (Elle Fanning) who arrives in Los Angeles with hopes of becoming a model and then falls in with a perverse raft of archetypes atop waves of deep crimson imagery. Someone could look at this film and say, ‘These are only tableaux! Nothing’s going on.” But beauty is in the eye of the beholder: is all the sound and fury, the design and décor, the understated acting, is that…cinema? “I really like the way that you call it tableaux,” Refn says, leaning into his flattery, “because you’re the only one that picked up on that.”

When composing these tableaux vivant, Refn and his splendid cinematographer Natasha Braier (“The Rover,” “The Milk Of Sorrow”) are aware of parallel fine artists, not limited to the fashion-inspired performances of Vanessa Beecroft and photographers including the late Vogue photographer Guy Bourdin and maker of sinister scenarios Gregory Crewdson. “But it’s not so much that. It’s when you said tableaux, that’s very precise structurally. I basically designed the movie as something my kids would watch on the internet. Because they have no more length than ten minutes on YouTube. The idea was that you could cut the movie up in ten-minute pieces, see it individually, or you could put it all together and see it again.”

Kenneth Anger and Alejandro Jodorowsky are two godfathers of “The Neon Demon.” What’s their contribution? “Wow! Big questions!” he says, laughing. “Everyone can refer to [Anger] in modern cinema. I mean, ‘Scorpio Rising,’ his introduction to larger-than-life, fetishized images combined with pop music, he created modern advertising. A lot of other directors can talk about clear references to his work. He did a movie called ‘The Inauguration of the Pleasure Dome,’ (1954) which I always found very, very interesting. I mean, of course, the use of colors and how Kenneth Anger would frame off and the eroticism that in a way was very mixed of male and female. He made some incredible things with women. And of course, Jodorowsky more just as a [friend]. When I did this film with Elle, I had a Tarot reading [with him] every weekend.”

Refn has expressed envy of silent film acting in all its forms. “The Neon Demon”’s mise-en-scène is grandiose, but the acting is hushed. “Well, less is more,” he murmurs.

“Yeah. Always,” the eighteen-year-old Fanning adds. “The subtlety… the character seems like such a, well, big idea, such a huge change on paper, it seems like this giant transformation, going from, oh, this innocent, to the neon demon of what she becomes. Nic helped me with that. We would do the scenes repeatedly and hone in on the particulars, so it was very detail-oriented, you didn’t need to do much. But everything’s underneath. It’s funny, ’cause while you’re filming the scene, it felt huge inside me. Inside, it just feels like you’re erupting, but that comes across in a very subtle way when I saw it. When you’re filming the scene, you’re not thinking, ‘Oh, this I want to be subtle,’ it comes across that way in small movements.”


“It’s a quality of acting that is partly a matter of having to think,” Refn continues. “It’s, well, it’s that having to do less. These are the people who make acting look easy. That’s the hardest thing. Minimalist acting is probably the most demanding form of acting because every single detail of the performance is enlarged enormously and you are very much like almost… it becomes transparent, where performance-wise, you can’t tell where it stops and where it ends. Cinema has this ability to mutate acting into a form of performance art. But with images.”

In Refn’s most recent films, the framing suggests there’s something just beyond the boundaries, not like in terror or horror, but is the movie over here, will it shift, figuratively? “If you look at Guy Bourdin, what’s interesting about his design is that a lot of times, the curiosity lies in what’s around, so it’s not what you see, but it’s what you don’t see,” he says. “Where Kenneth Anger was purely fetishization, Guy Bourdin has a sense of mystery. And what I think is interesting in cinema is the idea that what you see is not so much as interesting as what you could imagine that’s around it. So that’s why everything in the movie, we shoot very little coverage, so specific, because it’s what you see, but the magic is what’s around it.”

“The Neon Demon” makes a twisted appropriation of a classic element of surrealist imagery, the eye. There’s an eyeball that the film winds up dealing with that resists interpretation, not the eye of the viewer, but this poison that infects everyone who attempts to imbibe it. “It’s the neon demon!” he says. “You can’t destroy it. The eye is more powerful than our reality. Our perception is more important than what is essentially there.”

Refn’s ringtone sounds, the Theremin sting from “Forbidden Planet.” He flicks it away. “Narcissus found the liquid and falls in and continues to swim forever and ever. Something that Elle and I talked a lot about, well, what if the liquid became digital? And the digital world and the world of reality… Our generation grew up with the advent of the digital revolution. Elle’s generation? Our generation, it was obviously an artificial creation, because we saw the creation of it. Elle’s generation and the one after, the artificial revolution will essentially become a reality. There’ll be almost no difference. It’ll be like a mutation of the digital, and with the real world, will become one world that is only viewed of reality in the future. The eye, it’s how we define the world, and it’s at the same time, it’s how we view ourselves. So that narcissism essentially becomes a quality, a celebration.”

“Our strength is what we look up to, so it’s all about how can we create perfection through the digital revolution that we can mutate into? That’s why the neon demon wins!”

[…] Nicholas Winding Refn’s The Neon Demon (Broad Green Blu, $35) is minimalism and maximalism, a languorous rush of images and wall of music hangered onto a fairytale of an underage girl (Elle Fanning) who arrives in Los Angeles with hopes of becoming a model and then falls in with a perverse raft of archetypes atop waves of deep crimson imagery. Someone could look at this film and say, ‘These are only tableaux! Nothing’s going on.” But beauty is in the eye of the beholder: is all the sound and fury, the design and décor, the understated acting, is that…cinema? “I really like… Read more »