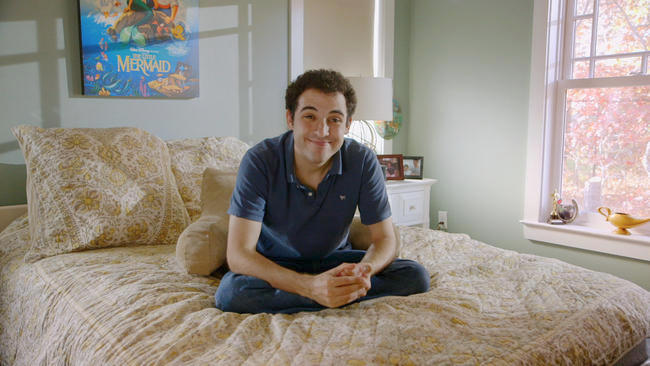 When I hear the words, “inspirational documentary,” I almost immediately feel my teeth grind. I’ll usually resist that teeming genre unless I absolutely believe what someone else has said, or written, about a movie that meets that description. (“Coming-of-age” is a loud, clear bell as well.) Roger Ross Williams’ warm coming-of-age inspirational documentary “Life, Animated” is about Owen Suskind, a twenty-five-year-old who couldn’t speak as a child, but through the offices of many repeated viewings of Walt Disney animated films, found his way out of a diagnosis of “regressive autism” at the age of three, into communicating with the world in his own way. Here’s a measure of how good “Life, Animated” is: the copyright-frosty Disney corporation cleared a plethora of footage of its products for use. Emotionally  and ultimately thrilling, the time-shifting “Life, Animated” is suggestive on the subject of the power of cinema, and specific on the effects it had on unlocking at least one particular mind. Suskind’s intent watchfulness, intercut with footage from movies is compelling, even as recurrent valentines to the universality of Disney myth-crafting grate. The intimacy with Owen comes at the cost of understanding whether similar joy has been visited upon others. U.S. documentary directing award winner at Sundance 2016. With Ron Suskind, Gilbert Gottfried. 92m. (Ray Pride)