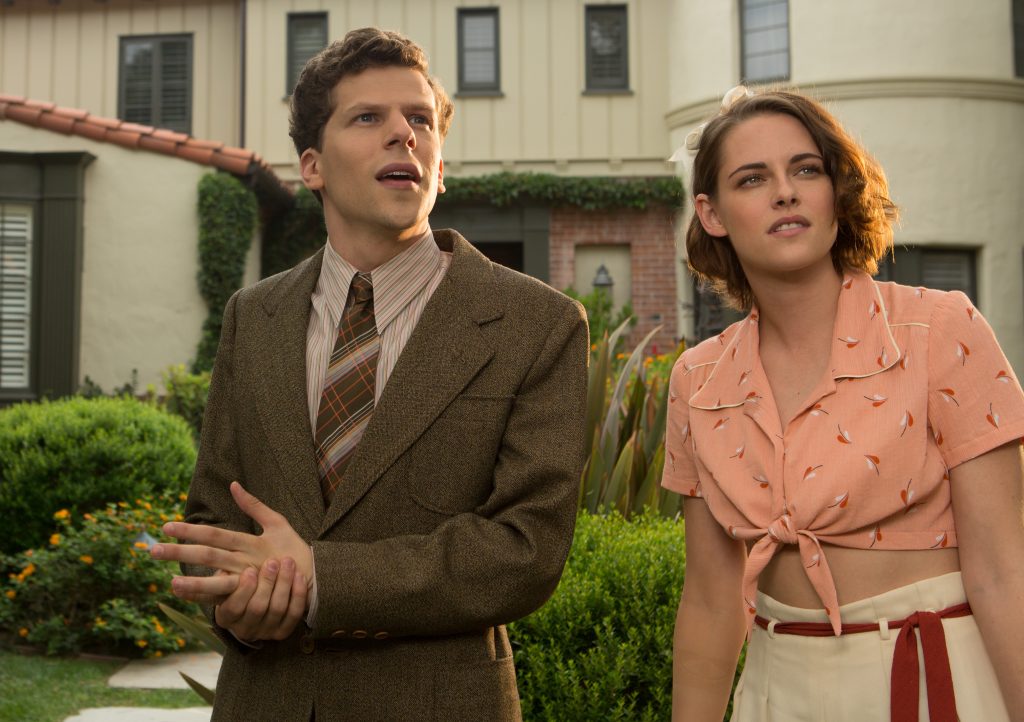 Woody Allen’s forty-ninth or so feature, completed around the age of eighty, is a light romance, but lit with the most serious of ethereal light by the great Vittorio Storaro (“The Conformist,” “Apocalypse Now”), providing Allen with his first shot-on-digital picture. Whether in overcast New York City or honeyed L.A., “Café Society” is Allen’s best-looking movie since the heyday of his seminal collaborations with Gordon Willis. It’s the 1930s and lightly sketched Bronx boy Bobby Dorfman (Jesse Eisenberg) escapes his family for Hollywood, and turns from naïf to macher in the reflected light of the even more lightly sketched secretary Vonnie (Kristen Stewart). Steve Carell (taking over for another, older actor who couldn’t stand the heavy lifting of largely sitting in chairs and in barrooms) does clean work as Phil, the quietly rat-a-tat agent who brings the pair together (and pulls them apart). The jokes are familiar, beginning with Bobby’s battling family (Jeannie Berlin, Ken Stott) and his cut-to-the-punchline gangster brother (Corey Stoll). Still, the ineffable Berlin is a voice of steady umbrage. And Storaro’s light can do no wrong upon faces, bringing out a piercing pale blue I’ve never seen in Eisenberg’s eyes, and making Stewart both modern and classical, her face radiating different in generous light that ranges from burnished to creamy to dreamy to candlelight to nightclub-bound. One of the many name-dropping lines that pass for dialogue, “What do you think of Joel McCrea?”—is followed by a shot of Eisenberg, practically McCrea in a nimbus of afternoon light.

The design extends in multiple lovely settings to the color experimentation Storaro practices, such as a light swoon of a moment where we first notice a simple, red-detailed dress worn by Stewart, who then walks toward a bar with a red neon “Cocktails” sign, passing beneath a spray of red maple leaves. (This is not to neglect Santo Loquasto’s design genius.) A repetition of gun murders ordered by Bobby’s brothers brings Allen’s direct shooting style close to that of Alan Clarke’s dispassionate “Elephant.” It’s a bracing element amid the agreeable japery and pleasantly familiar goings-on. The melodies of the casual storytelling are like a familiar song heard from the street below, or TCM playing in a nearby apartment. “Dare I kiss you?” “How dare you not?” (Stewart sounds the second line to perfection.) Allen’s largely superfluous voiceover sounds as if he’s sight-reading unfamiliar and unpleasant text, his belabored delivery also capturing the clack of teeth and the sigh of difficult breath. (If only Todd Solondz had narrated.) With Blake Lively as the translucent slip of a blonde who cannot supplant the memory of Vonnie despite bearing the same name; Parker Posey, Corey Stoll, Paul Schneider. 96m. (Ray Pride)