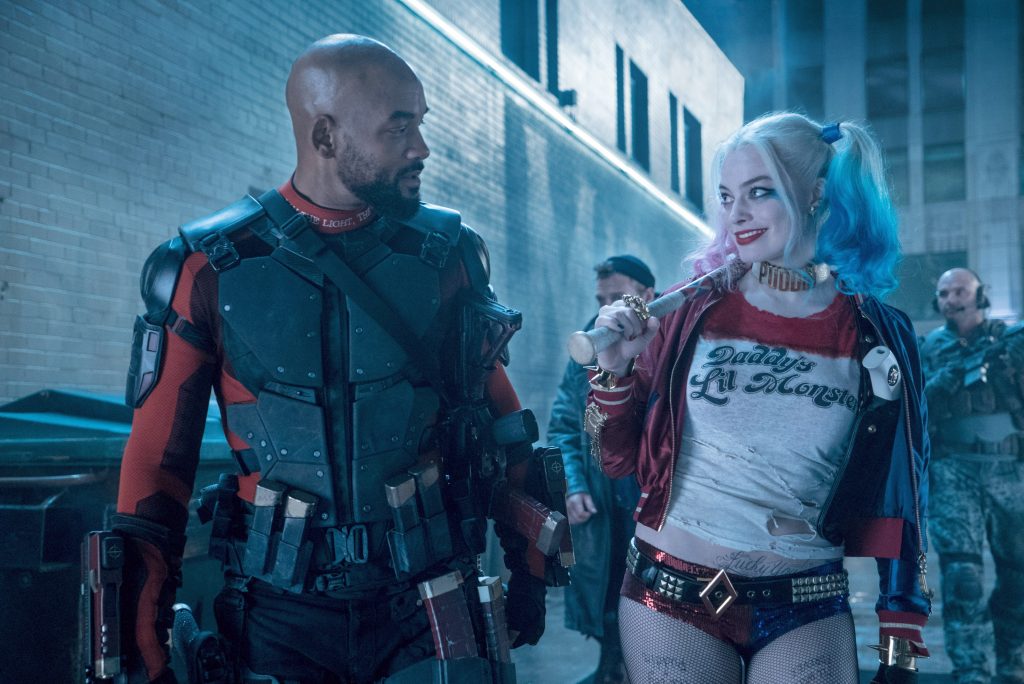 Super-meh. Writer-director David Ayer’s (“End of Watch,” “Fury”) DC Comics adaptation strands a raft of largely uninteresting supervillain characters in a PG-13 jab at grimy, scuzzy, post-punk, post-Michael Mann, nearly-post-Zack Snyder bubblegum antihero action. It’s a jumble in every fashion: “Suicide Squad” leaps feet first into the problem that faces many of the current crop of rogue’s-gallery superhero films: too many “meta-human” characters, too little characterization. I’d count five primary characters: Will Smith’s Deadshot, Margot Robbie’s Harley Quinn, Ben Affleck’s sexually aggressive Batman, the movie’s own version of Fritz Lang’s Dr. Mabuse (Viola Davis) and the seldom-seen Joker, an only lightly louche Jared Leto. Then there are at least eight more: Jai Courtney, Jay Hernandez, Adewale Akinnuoye-Agbaje, Ike Barinholtz, Scott Eastwood, Cara Delevingne, Adam Beach and Karen Fukuhara. Robbie’s performance is the most vexing among the quirksome and the quixotic as her boldly costumed Suicide Girl-styled figure is cast adrift on a cartoon Brooklyn-Jersey accent, her smile smeared judiciously with slicks of red lipstick, the camera isolating her for lines like “Normal is a setting on the dryer!” (The film does not live up to the dramatic potential of the implications of female agency in her self-confident declaration, “I sleep where I want, when I want, with who I want.”) After a promisingly confident, jabby-herky-jerky opening, “Suicide” descends into spatially, narratively incoherent battles royale, with dark, clotted images shot on backlots and Toronto streets, including readily recognizable local brand names like Pizza Pizza, along with zooming nighttime chases down corridors of Yonge Street. A couple of images burn: a figure cast of flame dancing on a pyro’s hand fading and falling to airless nothing beneath a pint glass; a detonated subway platform spatted and striated with gusts of frozen black ick, akin to a Cornelia Parker sculpture like “Cold Dark Matter.” The dialogue tries for the offhanded and irreverent: “Deadshot, he shoots people… He’s a crocodile, he eats people… He burns people…You’re possessed by a witch…And she’s just crazy” is typical. On the occasion of the end of the world in Midway City, a miles-high CGI waterspout-magnetic pyre emanates from Toronto’s Bay Street TTC station and threatens to consume the planet entire. Scary! Then there’s another twenty minutes of bunkum-junkum mock-mystical mumbo-jumbo as well as gushing sentimental embrace of the comfort of having the back of your family of pick-up fuck-ups. In the crashingly dull last half hour, I could only think, what has Donald Trump said since supper? The unfailingly on-the-nose and unthinkably costly pop-rock song score includes “House Of The Rising Sun,” “You Don’t Own Me,” “Sympathy For The Devil,” “Super Freak,” “Dirty Deeds Done Dirt Cheap,” “Slippin’ Into Darkness,” “Fortunate Son,” “Black Skinhead,” “Seven Nation Army,” “Spirit In The Sky,” “Bohemian Rhapsody” and Eminem’s “Without Me.” Reviewed in non-3D format. 123m. (Ray Pride)