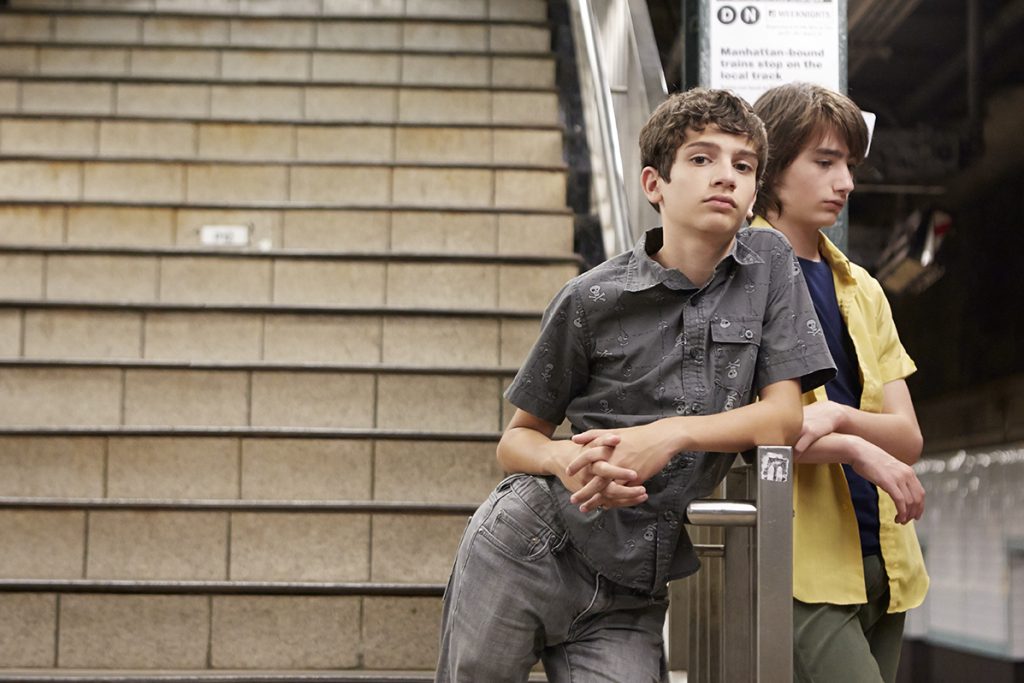 Writer-director Ira Sachs’ mesmerizing movies are quiet yet restive, compact yet hardly terse. In “Little Men,” questions like, “what is family?” and “what is money?” are dramatized with delicate, elusive craft through the handiwork of craftspeople doing what they do best.

It’s not only the screenplay by Sachs and Mauricio Zacharias, his co-writer on  “Keep The Lights On” and “Love Is Strange.” It’s the playful yet wary score by Dickon Hinchliffe (Claire Denis’ “Friday Night” and several Sachs films beginning with “40 Shades Of Blue”). Production design (Alexandra Schaller) and costume design (Eden Miller) that suggest summer, in neon-assertive colors by day, falling off to rust red and then in the classic apartment’s fall of crepuscular dusk into shadow. Simple, loose frames that use a slightly longer focal length to bring near and far together, as drawn by cinematographer Oscar Durán. And Sachs’ customary sound designer, Damian Volpe, insinuating, then insisting on the aural swaddle of a borough ever in motion, the quick conflict of bodies in proximity.

The twining of the characters begins immediately after introducing thirteen-year-old Jake (contemplative Theo Taplitz) in the classroom, chided by a teacher for his creative color choices in an art class with “Watch out, Jacob, van Gogh wound up cutting off his own ear.” When Jake’s grandfather dies, his family inherits a Brooklyn storefront and moves into the second-floor apartment above a clothing store run by Leonor (Chilean actress Paulina Garcia, “Gloria”), who also has a thirteen-year-old, Tony, who wants to be an actor (a properly protean Michael Barbieri).

“You know I grew up in this house,” is one of the first things we hear from Jake’s father, Brian (Greg Kinnear) to his wife, Kathy (Jennifer Ehle). “It’s become a very bohemian area,” Tony says to Jake, not knowing he’s befriended the boy of proto-post-bohos. A working actor, Brian’s broke, even as Kathy works as a psychotherapist, so the building’s a godsend, even if it means raising the rent on the dress shop to unaffordable (for Leonor) near-market rates. “Well, the neighborhood’s changing,” Brian says, simultaneously voice of inheritance and gentrifier, plucking a lease from a leather valise and passing it across to Leonor.

That’s property. What is family? Leonor tended to Max, Brian’s late father. Brian and Kathy argue. The boys bond. All this unfolds in miniaturist intricacy, thrilling in its apparent ordinariness, as if the camera just came to rest in front of these moments that are actually rich with seductive design, a jewel setting for the tender trapped gestures of each performance, each actor’s actions and reactions, seemingly offhanded, yet precisely arrayed. “To some extent, we’re all defined by our relationship to love and our relationship to money,” Sachs says in the film’s press kit. “As a storyteller, I’m interested in how people respond to those two things. In this situation, you have these kids who still have a certain innocence of the world, and their friendship comes into conflict with the hard realities of adulthood and living in the world.”

There’s narrative confidence underpinning all of Sachs’ screenplays, as well as suitable visual dynamics, but in “Keep The Lights On” (2012), “Love Is Strange” (2014) and now “Little Men,” Sachs has become a consistently superlative visual artist, calibrating the look and sensation of the modern metropolis of New York City. The attentiveness to light and texture, from bright to diminished, functions as both heightened naturalism and as evocation of painterly gestures (which Sachs would surely cite, as always, when pressed) that are hushed and elegant. Gently simmering. But what could have simply been keen, decorous anthropology rises to humane drama of rare intimacy.

For “Little Men,” Sachs has cited the master of the straightforward-yet-roiling domestic drama, Yasujiro Ozu, and in particular his silent chronicle of teen-boy hijinks (with one of the greatest film titles ever), “I Was Born, But…” (1932), as well as its 1959 remake of sorts, “Good Morning.” The borrowing is apt yet unshowy: Ozu lingered in the contested spaces of Sachs’ previous film, “Love is Strange” in its patterning of incident after Roger Ebert favorite “Tokyo Story.” Yet it’s the boys’ own stories in “Little Men,” the joy of becoming friends on the streets of the city, aside from the drama of property and inheritance and provisional family. We see the drama from their curious, yet forbearing perspective. They want to play. They seem to say: leave us alone, we’re bonding over video games. Future all around you, dad. Learn to negotiate it and negotiate with it or else we’re the generation that will suffer consequences.

A loving embrace. A quiet tragedy. “Little Men” stands for a generation of independent filmmaking that isn’t being financed, produced or properly distributed. It’s author-driven but team-built. It’s heartfelt, and at the end of its fleet eighty-five minutes, it’s lovely and hopeful, yet shattering.

I saw Little Men when it premiered at the Chicago Critics’ Film Festival. Wow, what a touching and wonderful film! The NYC Writer/Director of “Little Men” was in attendance and spoke before the screening, where he thanked one of the local Chicago producers, which was Fathers Rights’ pioneer Jeffery Leving. He is the top family law attorney in the nation. Leving is a huge advocate for the powerful positive force of paternal involvement, which was an underlying theme in the film.. There are countless statistics that show the positive effects of father involvement that Tony was lacking. I suspect this… Read more »