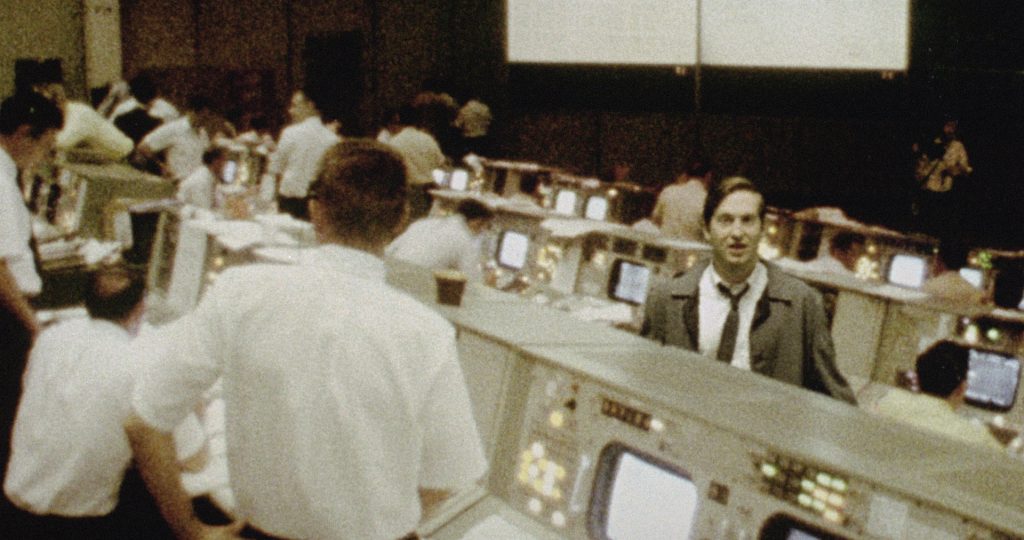 With his second feature, twenty-eight-year-old Canadian writer-director-actor Matt Johnson remains promising, but, man, is the semi-improvised “Operation Avalanche” a wearisome batch of muffled gags. A 1967-set fake period documentary aiming toward the style of “Zelig” and “Forrest Gump,” “Avalanche” pits a pair of young CIA agents (or, young actors playing CIA agents) against a potential Russian mole at NASA. Discovering a government cover-up that the U.S. won’t make it to the moon, the pair pretends to be documentary filmmakers (or, young actors playing CIA agents playing documentary filmmakers) in order to fake the landing in a studio in Texas. A brief scene finds them infiltrating Stanley Kubrick’s “2001: A Space Odyssey” Shepperton Studios backlot, introducing the first of several scenes that indicate wit but go no farther.

It’s a cheap movie, which should be part of a quantum of nerdy charm: fakers meet fakers meet fakers and let’s put on a show. But starting with the single can of Fischer beer that winds up in several scenes upside down, the attempt grows tedious, like a Super 8 movie by a fourteen-year-old that encourages a teacher to take the filmmaker under wing. It’s like it says:  “Never. Ever. Again. Show this to anyone.”

There’s also a familiar Canadian lackadaisicalness, a recurrent airlessness, suggesting a film made by Brit-born Christopher Guest running on fumes. The Canuck character of the enterprise comes through in how many, many times the actors pronounce “out” and “about” with the Northern elongation: “ooot,” “abooot.” There’s also a sloppy surfeit of ragged “fucks,” a function of provincial classification systems that don’t slap restricted ratings on pictures with profanity. The “filmmakers”-within-the-film also cart around a lot of one-sheets for cinephiles of that era, including Orson Welles’ “The Stranger,” “Dr. Strangelove,” “Dr. Zhivago,” “8 ½,” “Lawrence of Arabia,” “Lolita,” “The Misfits,” “Touch of Evil” and “Contempt.” I wouldn’t recommend “Operation Avalanche,” but I also wouldn’t bet against Johnson’s industry and ambition, particularly as he learns and grows with further features with the team also behind his debut, “The Dirties,” working under the moniker, “Zapruder Films.” 93m. (Ray Pride)