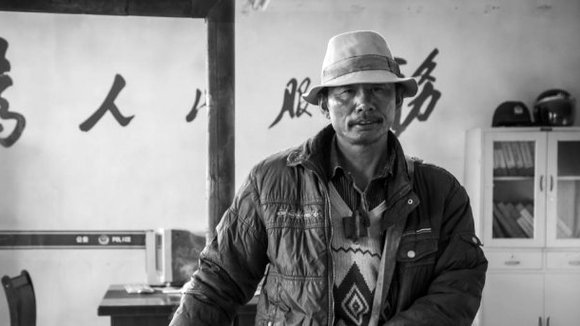 A refined, fabulist love story from Tibetan director Pema Tseden (“Old Dog”), “Tharlo” (Ta luo) manages to be poetic, political and romantic in eighty-four rigorous black-and-white shots. Adapting his own novel, Tseden portrays Tharlo (Tibetan comedy star Shide Nyima) as an orphan grown into a shepherd of forty or so, known to locals as “Ponytail” (Tharlo). He has a prodigious memory, but doesn’t remember his own name. (Read the political implication as you will.) Tharlo makes a trip to the city for a new Chinese I.D. card, where the complications include having to have his hair washed by a hairdresser (Yangshik Tso) with whom he’s immediately taken. The loss of his ponytail leaves him bald: read the political implication as you will. Smoking, drinking, karaoke and little lost lambs ensue, along with commonplace deceit. Could they run away to Lhasa or Beijing? “Tharlo is typical of Tibetans of the present generation,” Tseden has written. “This is a story that shows them in the state of confusion, disorientation and desensitization.” The lovely, loving craft extends to gentle, haunting sound design: these worlds are both concrete and dreamy in Tseden’s eye, geometrically exquisite yet filled with implications of wandering and wonder. 123m. (Ray Pride)