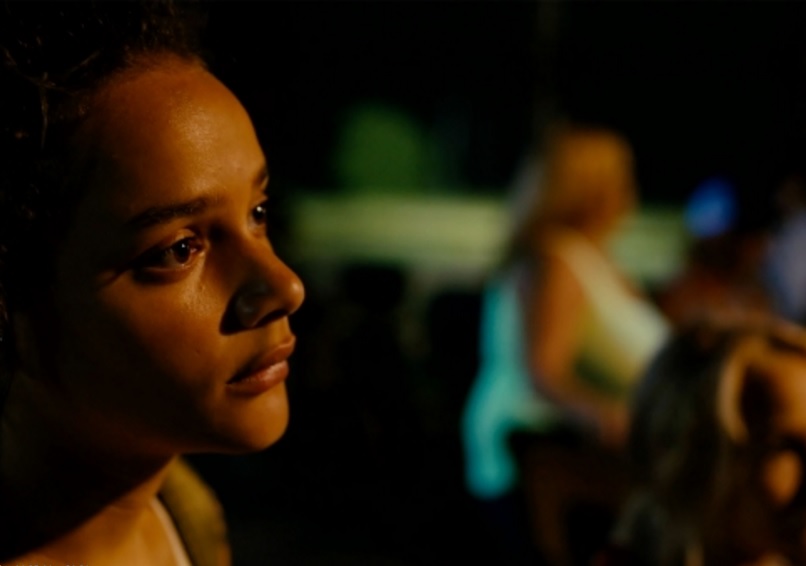 Andrea Arnold’s magical “American Honey” skirts rivers and bodies of water, and arrives at a firefly-graced glade whose tributaries are the mostly paved, sometimes rugged dirt highways between great, green gulps of the twenty-first century American West. Lush, lovelorn, packed with the rowdiness and hormonal charge of young bodies as well as the momentary interventions of flora and fauna, it’s the most loving and forgiving of Arnold’s four fine features, which include the sexually stark “Red Road” (2006), the rowdy “Fish Tank” (2009) and “Wuthering Heights.” Arnold also won the Academy Award in 2003 for her blisteringly exquisite short, “Wasp,” about  a single mother who leaves her children on their own as she goes on a date. That feeling, the ache of children left alone, resonates throughout her work.

The story behind the production of “American Honey” is almost as compelling as the gestures, the strokes of behavior and the brisk wit of her teen characters in this road drama film. The fifty-five-year-old English writer-director debuted her wind-shorn adaptation of “Wuthering Heights” at the 2012 Sundance Film Festival. While in Utah she was taken with the landscape, the hardscrabble towns, and the people she met. When traveling via shuttle bus to the airport, Arnold, who is from the U.K., had a moment. “The sun was coming up over the mountains and I was looking out the window and thinking, ‘how can I have come all this way and not stop and take all this in?’ ” she recounts in the film’s press notes. “I started crying. The way I was living felt all wrong.” At the Salt Lake City airport, she rented a car with no destination in mind. “I didn’t have a map,” Arnold says. “I just talked to people and asked them where I should go. People kept recommending places.”

The “places” she discovered filtered into her inchoate project, further propelled by a New York Times article about youth crews crisscrossing the country selling magazine subscriptions, an apparently anachronistic pursuit that offers her movie a ready armature to convey the nomadic impulse of a teenager hoping to escape family and peers. (The production scout covered 21,000 miles; the shoot itself, 15,000.) Arnold’s narrative, drawn from an outline, has improvisations that reflect the personalities of the young people she cast. The crew moves from one suburb to another arrogantly verdant suburb, from dusty state to dustier state, making up identities for each potential sale from door to door and moment to moment, at an age when most social interaction is already unconsciously about identify formation. Of the fifteen roles Arnold cast, eleven of her choices had never acted before. The road movie behind the road movie was cast with her usual cinematographer, Robbie Ryan, her production designer Kelly McGehee, her costume designer, a sound recordist and two producers.

All this function leads to finely detailed form: a lengthy but never laborious journey that embraces small and smaller towns and features both young and old through the lens of a foreigner’s eye and a lover’s gleeful delectation. There’s drink and drugs and sex. The attractions between characters are shambolic and narcotic, but Arnold’s eye is hardly lewd. Even the most fraught scene, an intimacy-for-pay interlude in an oil field, is lit by a juddering pyre of well runoff that rises more like the dead wrath of a silent god than a sexual force. The renegade, roistering, song-heavy result ranges from moments of emotional vehemence to tender delicacy.

There would be more incident than plot to recount in a story readily reduced to what is written in the press notes: “a clutch of Dodgers from around the country hope to cadge cash under the eye of a female Fagin. The eye of the storminess is Star, played by final-minute discovery Sasha Lane, a mixed-race college freshman from Texas with dreadlocks and tattoos.” The discovery of Lane was an augury for all the opportunities that Arnold hoped to avail herself of in the production process: liquid-eyed, quick to smile, quicker to scowl, Lane is a vital, vivid screen presence. Her emotional veracity is matched by the other members of the crew, including a rangy performance by Shia LaBeouf as a slightly older player who specializes in drawing young women into the clutches of crew manager Kristal (the sullen Riley Keough).

Arnold and Ryan again shoot in the nearly square Academy format of classic Hollywood, but the effect in “American Honey” is for her close-ups to capture the strength and bursting vitality of her characters. The format of Instagram photos or Polaroid pictures might come to mind, but the caress of Arnold’s camera pushes intellectualized comparisons largely to the side. The motions in the moments moving toward the lyrical ending are a cool bath of images, inchoate, unspoken; nature and Star merge in a dream of the gentle, assured flight of lightning bugs. Fireflies make a dance of beautiful light, but their life is short. Some perish when touched. Like the disorderly children of Arnold’s beautiful, generous work, we can only admire those luminescent, luminous instants.