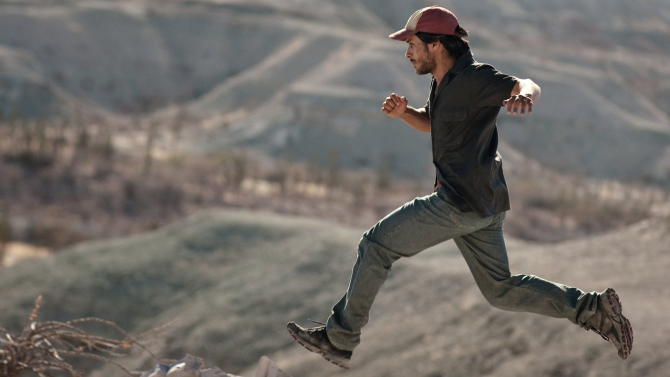 “Leaving is a form of dying,” a character says prayerfully in the opening scene of “Desierto,” before all hell, and Hell, breaks loose. In his spare, even minimalist second feature, thirty-five-year-old Jonás Cuarón—co-writer of “Gravity” with his father, Alfonso Cuarón—puts the human face on the terrifying story of border crossings between Mexico and the United States. It’s artful in its own right, but also a blunt, powerful rebuke to the sloganeering politics of xenophobe American politicians like Donald Trump. (Cuarón also directed the haunting Oscar-shortlisted “Aningaaq,” a 2013 short that accompanied “Gravity,” dramatizing the other end of the strange phone call Sandra Bullock’s character receives in space.)

Cuarón’s first feature, 2007’s “Year of the Nail” was another kind of formal exercise, telling the story of a youthful love affair crossing continents through a succession of stills. (Also clever in not requiring much of a crew to go from place to place.) The near-wordless “Desierto” is masterfully taut, with Gael García Bernal playing a kindly man who doesn’t expect he and his fellow immigrants to land in the crosshairs of a murderous sniper vigilante. Confederate flag-brandishing Jeffrey Dean Morgan pursues this group of men and women who have nowhere to hide in the desert terrain between the borders of Mexico and the United States. Cuarón jokes that he’s made the “down to earth” version of “Gravity” with his latest film. As in the best genre films, larger truths and topical awareness are introduced as primal fears are stoked in Cuarón’s admirably harsh, bloody, unsentimental exploitation thriller. Innocence is laid waste in the wasteland. The percussive score by the talented Yoann Lemoine, who performs as Woodkid, is indelibly nerve-jangling. 88m. (Ray Pride)