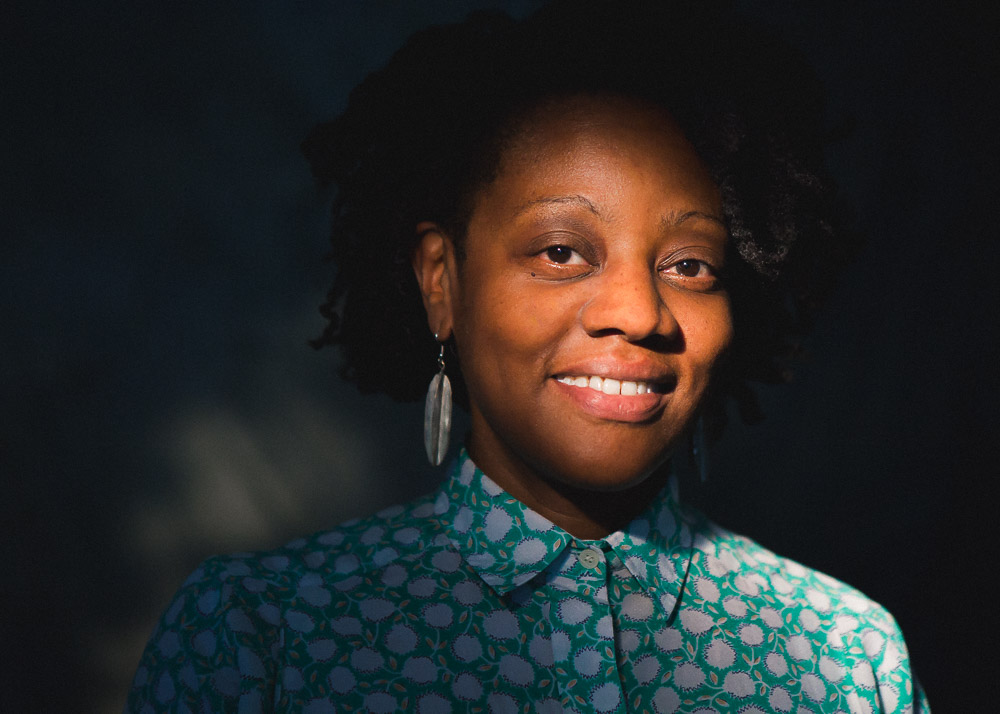 31
CAULEEN SMITH
“I’m so comfortable being an outlier that the idea that the film community knows me, sees me and appreciates my little contributions is very meaningful to me,” says interdisciplinary artist Cauleen Smith. “I’m a new resident to Chicago, but a fiercely proud one.” Smith, who brings a piercing gaze to Chicago landscapes and figures, is shooting a series of short films “very loosely based“ on the social architecture of Simon Rodia, the spiritual writings of Alice Coltrane, the gift drawings of teenage Shaker girls in the middle of the eighteenth century, “and the prophetic visions, as told by her, of a Black Shaker Eldress named Rebecca Jackson who ran her own colony of Shakers in the center of Philadelphia.” She has a muse, she says, “who is just such a skilled mover and performer that she will play all of the characters. Most of the constructed scenes will be shot of her in Chicago in my neighborhood, Grand Boulevard.” Her present work is “a reorientation to cinema and what it means to watch moving images. Things appear to be documentary that are wholly constructed, and things that are forcefully constructed stand in for fact. I guess I’m trying to get the viewer to trust me more than she trusts the conventions of cinema. Most likely an impossible task, but an interesting personal challenge.” She looks for other challenges as well. “Moving to Chicago [from San Diego] changed the way I work. I decided to try and operate my own camera. As you can imagine, that changed a lot of the aesthetics, maybe not for the better, but in interesting ways. So now I am slowly gathering a team, or maybe a better description would be a band, my crew and cast, a nimble and skilled group of technicians who can work together improvisationally. So far working this way has been really fun. But my band has never been more than a trio. We’ll see what happens when we get to Earth, Wind, & Fire size!” Smith also appreciates the larger vista of local possibilities. “I know that Chicago filmmakers are really dedicated to a strong documentary community and a strong commercial television business. This is vital because people like me depend on the industry. I think I just participate in it a little different than the purposes for which it was designed. For me the most important thing right now is trying to support the screening venues all over the city, which is a challenge for us all. But bringing work to Chicago and bringing artists to Chicago to screen work is so exciting and produces such fruitful dialogues.” Website.

32
FREDERICK MENSCH
“I write about what it feels like to want something that you can’t have,” screenwriter Frederick Mensch says of his work. “For one reason or another, I keep returning to that theme. That’s what my HBO film ‘Nightingale’ [2014] is about, and that’s what my new script ‘Wrong Numbers’ is about, too.” “Nightingale,” starring David Oyelowo, follows a killer confessing to the murder of his mother, restricted to a single location. Mensch’s current projects also strive toward simplicity. “The screenplays I’m writing lately are directly influenced by the Chicago storefront theater scene. That hyper-focused, no-frills intimacy is a huge inspiration.” “Wrong Numbers” is “a two-character, four-location chamber drama that director Duane Edwards and I plan to shoot this spring with Steppenwolf Ensemble member James Vincent Meredith and Marina Squerciati from ‘Chicago P.D.’ It’s about two characters who fall into a one-night stand that turns into something that neither one of them expected.” Chicago’s fertile creative scene is an important influence. “For better or worse, a lot of us working in Chicago are less focused on commerce than we might be if we lived in L.A., where it’s almost impossible to escape the industry. I’m not sure I could have written ‘Nightingale’ in Los Angeles because the absurdity of the enterprise would have been way too apparent. In Chicago, though, where thousands of insanely talented artists are working for virtually nothing in storefront theaters all over town, writing a one-character, one-location screenplay doesn’t seem all that crazy.” HBO interview.

33
J.P. SNIADECKI
Filmmaker-anthropologist J.P. Sniadecki directed one of 2015’s best documentaries, the clamorously atmospheric “The Iron Ministry,” which compresses three years of traveling on the infernal, eternal expansion of the vast Chinese rail system into what seems a single journey. Sniadecki, who recently relocated here to teach at Northwestern University, is an affiliate of Harvard’s Sensory Ethnography Lab, and collaborated on an earlier doc with that groundbreaking group’s Verena Paravel. After finishing “Iron Ministry,” Sniadecki says, “I feel more convinced and confident that my approach to filmmaking (stripped-down, small-scale, embodied and punk) is the most enjoyable to pursue for me, and the most open to discovery.” Of his new home, he says, “I don’t really feel that I’ve landed yet in Chicago. [I’m] still learning the lay of the land and meeting people. I do see that, in terms of the industry, Cinespace is growing and gaining attention, interest and resources. And between the universities like Northwestern, SAIC/Gene Siskel, University of Chicago, and the film festivals, a steady stream of amazing filmmakers are passing through town and showing work, giving talks and master classes. For me personally, I hope to soon begin new projects in Chicago and the Midwest, as well as keep making films in China.” Of his students at NU in the MFA in Documentary Media class, he says he’s “very happy they’re getting out of Evanston and exploring the city with great curiosity, a desire to engage, and the aesthetic sensibility to get to know the unique qualities and dynamics of the Chicago neighborhoods through extended periods of time, and through a kind of ‘cinema of place’ that emphasizes the built environment and social fabrics that shape us.“ Of upcoming projects, one excites Sniadecki most: “the buried story of two queer redneck hippie lovers who fought for their land and their liberty, and ultimately lost their lives, during a four-day armed standoff with Michigan police and the FBI near my childhood home in southwest Michigan in 2001, just one week before 9/11.” Bio. 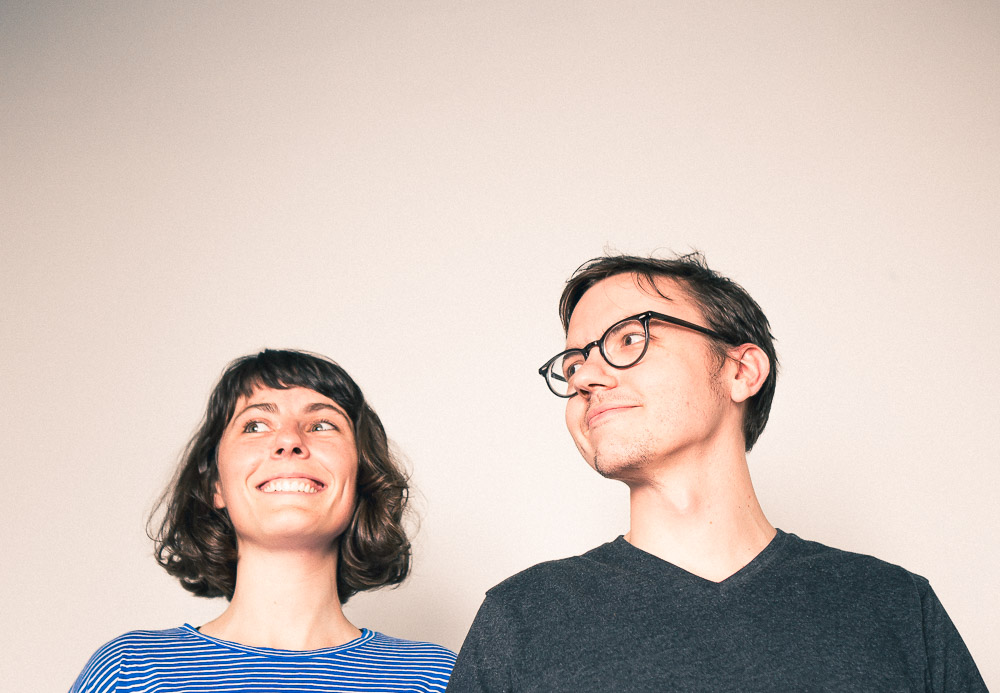 34
JERZY ROSE
Probably the best description of filmmaker Jerzy Rose’s work comes from fellow filmmaker Zach Clark, who called Rose’s second feature, “Crimes Against Humanity,” “a devious, intricately plotted comedy of reprehensible behavior and unfortunate coincidences… smart, pee-your-pants funny, and full of tons of weird ideas.” His 2014 short, “En Plein Air,” starring Ted Tremper, Alex Stein and Kylie Zane, a bone-dry send-up of the films of Eric Rohmer, debuted at Telluride 2014. Working with most of the Chicago creative team, from cast to script to score, of his earlier films, Rose’s latest feature, “Neighborhood Food Drive,” starring Lyra Hill and Bruce Bundy, is in post, “another mean comedy about awful idiots failing over and over,” but with “a very charming ensemble cast,” Rose adds. Shot in summer 2015, it follows the havoc when “two ladies and their unpaid intern try to throw a party at their pretentious, unpopular Logan Square restaurant.” “It’s on its way,” Rose says, deadpanning. “It’s really great. Everyone will love it. The score is great.” Rose adds: “Chicago is great because everyone works very hard, no one complains, it’s easy to make friends, it’s easy to organize your thoughts, it’s easy to make your dreams real.” Of his latest dream, he says, “I’ve finally been given the opportunity to break into the world of gastromantic stagecraft, or ventriloquism, with a large-budget project about moral insanity that will combine my love of both ceramics and glassblowing. I can’t say much about it, except that it will be a mixture of experimental/fiction/nonfiction/architecture/craft/ventriloquism.” Rose’s Fandor page.

35
TED TREMPER
Self-described “filmmaker, improviser, etc.” and intermittent Chicagoan Ted Tremper’s credits include the successful web series “Break-ups” and “Shrink” and, after a brief L.A. sojourn, a relocation to New York City to work as a producer of “The Daily Show.” He’s in Chicago to transform “Shrink” into a full-on television show to debut on Seeso in early 2017 while also writing, executive producing, directing and investing in a wealth of Chicago improv people and improvisers like Tim Baltz who divide their time between here and Los Angeles. The thirty-three-year-old actor has also appeared in films by Lori Felker and Jerzy Rose. “For my work at ‘The Daily Show,’ I do a tremendous amount of research to find stories where we can illuminate some great hypocrisy, which could lead to change in the real world. Otherwise, I try to think of something that feels impossible to accomplish and then just do it. That’s what led Hasan Minhaj and I to interview the Prime Minister of Canada, and Jordan Klepper and I to get him a real concealed handgun license that’s good in twenty-nine states. (Sorry.)” For his narrative work, he says, “I’m interested in how scenic improvisation can present the totality of the human experience. I mostly do this by creating a format, like splitting relationships in ‘Break-ups’ or improvised therapy in ‘Shrink,’ getting the best improvisers on earth to get in front of cameras, then trying my best not to screw them up. Being trained in Chicago improv remains the most important education I’ve ever received. Everything I have and love about my life and my work stems from that.” And Chicago? “Dear God! I just hope Chicago continues to be a place where people put work before ego. And more than anything else, a place where the love of work, and the desire to do one’s very best continues to flourish.” Website. “Shrink.”