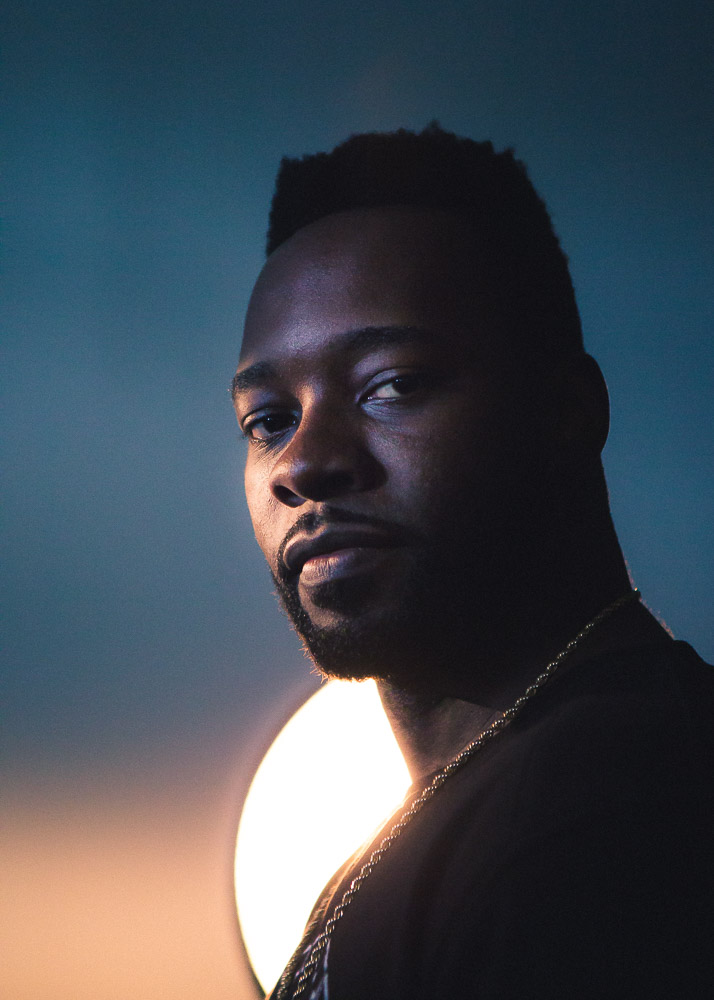 Lonnie Edwards’ “A Ferguson Story,” which debuted at the 2015 Black Harvest Film Festival, is an ambitious short documentary probing into the events in Ferguson, Missouri after the 2014 shooting of unarmed black teenager Michael Brown by a white police officer. We talked to the “thirty-five years young” filmmaker about the making and near unmaking of the film, as well as where his ambitions began and where he hopes they will take him.

How would you describe the form of “A Ferguson Story”?
“A Ferguson Story” is an accumulation of footage from news outlets as well as a few amateur photographers and cinematographers. The concept behind it is to show perspectives of everyone who was involved. In the same sense as we would view an abstract piece of art, I wanted to show the reality and rawness of what was happening, unskewed and unbiased, but flawed and imperfect, like all humans.

You had envisioned a longer film, but the shape of it changed after discussions with local activists. With so many documentaries being made today outside of traditional channels, there’s often confusion about what participation implies or awards. Could you talk about that?
Things were resolved. The groups in question requested some things. We complied with those requests in the best way we felt were reasonable, and all parties moved on. I recreated the film, because initially it was a full-length documentary, and turned it into a short doc. It’s done great, and it’s near its final leg on the 2015-16 film fest run. We took home eight awards out of the sixteen film festivals we were a part of. We’ve got Baltimore Black International Film Festival, New York No Limits Film Series, New York African Diaspora and it’s only right to close things out with the St. Louis International Film Festival. After that, I plan on putting the film online for free because I feel like the subject is something of continued relevance in society unfortunately. “Ferguson” was my second film and I look at the whole thing, much like anything in life, as a learning experience. There were a lot of things that happened within the process of that film that we all could’ve done a better job at, mainly communication. The lack of communication combined with assumptions caused things to escalate quickly, egos got involved (including my own), other parties got involved and the disconnection grew and grew. One of the biggest misconceptions in that whole situation, which was enforced by the media, was that I’m this greedy director with no morals. I think there was a point where many people felt that I was trying to be an activist or the voice of the people on the frontline and that’s not the case. I’m an artist who creates conscious content. I don’t create art with the intent on becoming famous or getting paid. There’s nothing that compares to the feeling of bringing to life these images and stories that push my mind to its capacity or being able to influence and inspire people around the world with my work. Those things are priceless. With that, I know that I’m not going to be able to please everyone and there will be people that won’t like my work or me. I can’t allow those things to slow me down or stop my vision. I hope to continue to grow as a human, as a father and as an artist. This is only the beginning, I have so much more to do.

How would you characterize your work?
I like to think of my work as an avant-garde mind stimulant. I want to provoke people to either be inspired or emotional, whatever that emotion might be. I personally feel that the title of filmmaker and artist can be two completely different things to many people, and I want to merge those lines or at least amalgamate the technician that is my inner “filmmaker” and the crudeness of my inner “artist.” I just want to continue to create pieces that will make the universe better. That is and will continue to be my job as a human and an artist.

What are you making now?
Chicago’s Full Spectrum Features picked up my 2014 film “Parietal Guidance” and I have been showing it as part of the “Chicagoland Shorts Vol. 2 series in theaters nationally. I have an Oscar Micheaux-inspired documentary about the Great Migration titled “Sounds of Exodus: An Ode to the Great Migration,” which delves into music and how it changed throughout the migration as blacks moved north to Chicago and how the history of its music has inspired all artists today. I have two narratives in production in October 2016. “Periphery” is a retrospect of a young black man who’s trapped in his mind and trapped on his block but is apprehensive to leave the “security” of his neighborhood. I was very happy that the immensely talented poet Ike Nwoye could contribute a spoken-word piece to that film and star in it. I’m co-directing a film with Layne Marie Williams, “Chavon Smith and The Atramentous Mind,” about a young black woman who has an inadvertent encounter with a police officer. The film explores the intersection between law enforcement, race and the complexity of human perception. Lastly, I’ll be working on a script with a good friend of mine, someone I look up to in this industry, actor-writer-director Derek Dow. I’ll be stepping out of my typical genre with this one, because it’s a comedy.

Have you recently made any kind of esthetic, production or community breakthrough that informs all this work?
Being that I didn’t have any formal training, I really had no idea where to start. I’d been reading so many how-to books and film blogs. The one constant I kept seeing was that it’s really hard to get your film out to the masses independently, unless you’re loaded or hella connected. So after we’d finished post for my first film “Parietal Guidance,” I thought I’d test the film festival waters and I submitted the film to seven festivals. Two accepted it: Black Harvest Film Festival, which was the first fest to accept my film, and then NY No Limits Film Series. There was this incredible domino effect after that. I have lots of love for the folks at Black Harvest and the Siskel Film Center because they pushed my film, believed in it and got it in front of many other fest directors and producers, which is what got us going. But when I initially got into the film industry a few years ago, it was something that I felt I needed to do. I had planned to create the art that was in my mind and put it out into the world. I’ve come to realize how important this place that I hold is and that my voice, though it is my voice, speaks to (and for) so many people. Realizing that, it’s definitely changed the way I’ve gone about creating work. And when you look at the way that black people have been represented in the entertainment industry… I really would like to contribute to changing the skewed perception of the black community and its people, as well as the way we’re typically portrayed in film and media. I’d like to delve deeper into the minds and reasons behind the behavior in youth and adults of every race, creed and culture. The last couple years, in the mainstream film world, I’ve seen movies that were made by black filmmakers that broke the door open in regards to what’s been considered a “black film,” films like “Dear White People” (2014), “Dope” (2015), “Kicks” (2016) and “Moonlight” (2016) have, I hope, challenged production-distribution companies to look for smarter, deeper films from black filmmakers. My goal is to create work that keeps this a consistent thing and maybe in the future we’re just talking about films created by black filmmakers and not black films.

And all that can happen here?
I always say this, but I feel like Chicago can be transformed into a place that is completely unfamiliar. This city’s landscape is different everywhere. You can create a film in Pilsen and a film in Rogers Park which look nothing like downtown. I really believe that people are taking note of this on a broad spectrum and the filmmakers in this town seem to be taking notice and staying put. There’s so much talent here in Chicago, I really think that we’ll see more production companies expanding and popping up in this city to hold onto these filmmakers that are being beckoned and outsourced to other cities. But in all honesty, regardless of where an artist ends up, no matter who it is they always end up coming back to Chicago to create something. The city is way too alluring.

The trailer for “A Ferguson Story” is here.