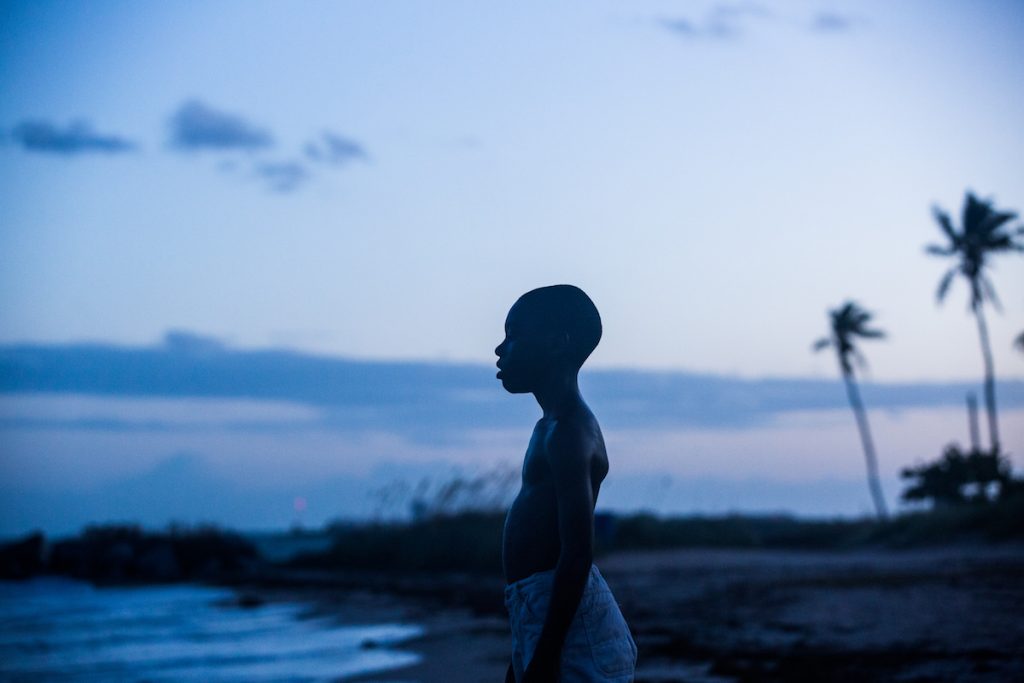 Filmmaker Barry Jenkins arrives with his second feature after the observant relationship indie, “Medicine For Melancholy.” “Moonlight” emphatically answers the question one of his characters asks of his reserved protagonist, “Who is you, man?” with “Moonlight.” Jenkins announces himself as a major director after a too-long eight-year hiatus from filmmaking with a stately, sorrowful masterpiece of love lost and love found, of meaning missing and enlightenment found, set in Miami in the minor key of Wong Kar-wai, but all-American in the best of all possible ways.

“I celebrate myself, and sing myself, / And what I assume you shall assume, / For every atom belonging to me as good belongs to you,” Walt Whitman wrote in the 1892 version of his poem, “Song of Myself.” In his celebration of a single individual, Jenkins adapts an unpublished theater piece, “In Moonlight Black Boys Look Blue,” written by MacArthur grant-winning playwright Tarell Alvin McCraney, who grew up blocks from Jenkins in the Liberty City neighborhood where the film is now set.

Jenkins celebrates an ordinary life in three chapters, following Chiron from curious boy to teased teenager to closed-off young man. (The three marvelously assured actors are Alex Hibbert, Ashton Sanders and Trevante Rhodes.) But what is extraordinary about “Moonlight” is that it is suffused with the ache of Chiron, a young African American, suppressing emotions in all social circumstances, from pressure and fear from the world outside his heart, but also from the fear of embracing love. The male heart, masculinity, is often dashed in with strokes of savagery, blooming with pandemonium and grandiosity. Chiron holds hurt. Despite crimes around Chiron, his heart is less dark than dimmed, the force of fear and hurt encrusting a carapace of wounded pride.

Of course, you can’t forget for a second the color of Chiron’s skin, but Jenkins’ gift is to suggest, to pinpoint inner struggle through the surroundings of his characters, from costume design to scene settings to the setting sun. Consider the thin and thick wallops of blue that he and cinematographer James Laxton apply gloriously to the screen. Blue, blue, electric blue. Lazy blue. Electrified blue. Wash of water. Ice-blue buzz of fluorescence. Azul, azure, lapis lazuli, teal, turquoise, sea, seafoam, sky, cerulean, cobalt: these are elemental hues and shades of the dynamically alive yet bruised palette of “Moonlight.” And skin, faces, limbs: gleaming, glistening skin of hue in humidity.

I saw “Moonlight” for the first time in the early evening, the day after the killing of Terence Crutcher, the day of the murder of Keith Lamont Scott. Directly after that screening, there was a tweet by activist Michael Skolnik, amassing a litany: “Wallet. Skittles. Cell phone. Loud music. Cigarettes. Cigarillos. Toy gun. Failure to signal. CDs. Stalled car. Reading a book.” Jenkins’ characters get on the wrong side of the law, and are not judged for it, but simply placed in the moment of their lives. Yet police-on-citizen violence isn’t the subject of this stately, held breath of a movie. Yet that rude subtext rests beneath the elegantly considered surfaces of “Moonlight,” unseen but omnipresent.

Jenkins’ storytelling comes in eddies and waves, circling, returning. He’s a cinephile, and for his key influence, he repeatedly cites the great masters of sensual cinema, and one of the shrewdest observers of modern masculinity, the French master Claire Denis (“Trouble Every Day,” “I Can’t Sleep”). “She’s my favorite filmmaker. I would say, if there’s any film that’s a one-to-one influence on this film, it would be [her] ‘Beau Travail’ for sure,” Jenkins told Brooklyn Magazine’s Paul Dallas before the film’s September debut at the New York Film Festival. “I think of Claire as a nuts and bolts filmmaker. There are no crazy transitions in her work. They are very clear-eyed, concrete images. And yet, she arrives at this level of metaphor that other filmmakers just aren’t capable of. Her films are very human examples of sensuality. I think Miami has a lot of that feeling, [which] was something the cinematographer and I wanted to communicate. Also, I didn’t want to make a movie about sexuality and gay, black men and not have it be sensual. That would have been antithetical to the point of the film.” Jenkins is articulate, but “Moonlight”? “Moonlight” is sublime, serenely articulate in the ways the body and the heart move when confronted with another figure, moving through space, moving through life. You can see the final shot gliding silkily toward you and yet it encapsulates everything blue, and black, and hopeful about Jenkins’ grand achievement. A small face. The massed blue of dusk fallen over the ocean. Two eyes with which to see.